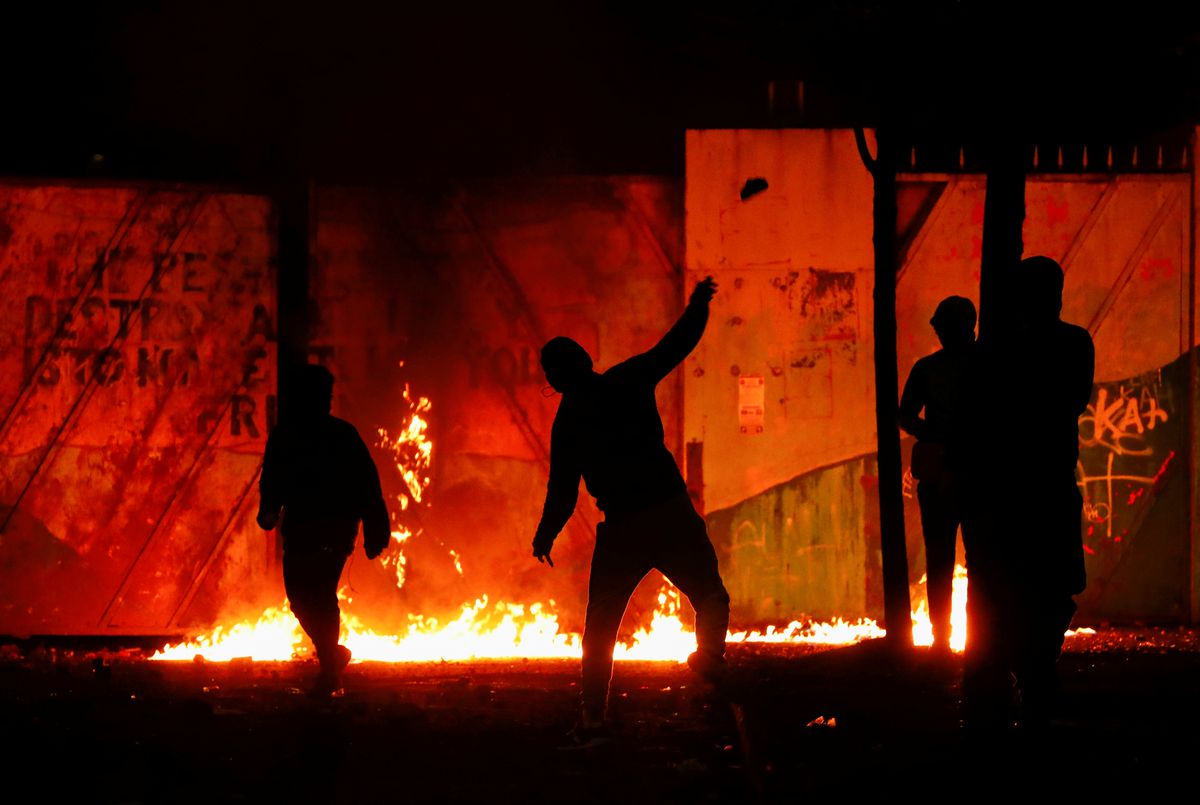 The flames of buses, police vehicles and containers on the streets of Northern Ireland have finally forced the Boris Johnson Government to open its eyes. A week followed by violent riots already leaves at least 55 officers injured. The British prime minister sent his minister for Northern Ireland, Brandon Lewis, to Belfast on Thursday. The autonomous executive, shared by unionists and republicans, has described the violence as “deplorable” and has demanded its cessation at the end of an emergency meeting. The Protestant community is frustrated by the consequences of Brexit and believes that London has betrayed it.

The Northern Ireland Assembly has begun to debate this Thursday how to appease the violence in the streets – unleashed by the consequences of Brexit and the exhaustion of the pandemic – which has already lasted for more than a week, leaving more than half Hundred police officers injured and numerous material damages. For the first time since the riots began, London has begun to pay attention. Johnson has been “deeply concerned” and has asked the different Northern Irish factions to find a solution. “The way to resolve differences is through dialogue, not through delinquency or criminal actions,” he said.

This time the origin of the tension has been in the unionist community, the Protestant population in favor of Northern Ireland remaining within the United Kingdom. The 1998 Good Friday Agreement restored peace to the island, but sectarian violence has never completely disappeared. It tends to resurface at the slightest spark. This time, however, there have been several sparks at once, and Northern Irish politicians have begun to fear that it will be more difficult to control.

The Northern Ireland Protocol, the document annexed to the UK’s withdrawal agreement from the EU, left this British territory within the customs space of the EU internal market. It was the way to avoid the imposition of a new border that would split Ireland and revive the quarrels. The Republic of Ireland is today the only EU territory with which the UK shares a physical boundary, but any inhabitant of the island moves seamlessly across a border that remains invisible. Unionist politicians, who feel betrayed by London’s decision, have stirred with their speech a feeling of frustration and abandonment among the Protestant community. But this political reality does not serve by itself to explain the new eruption of violence. In fact, a walk through the port of Foyle, in Derry, is enough to see that, despite new bureaucratic obstacles, the daily flow of goods still does not suggest that the island is closer to Brussels or further from London. We must add a long confinement due to the pandemic that has unnerved the population, a sense of abandonment of the Protestant population that comes from afar, and a specific episode that has resurrected resentments.

On June 30, 2020, 24 members of the leadership of the Republican Sinn Féin party, including its president Mary Lou McDonald, attended, along with thousands of people, the funeral of historic IRA member Bobby Storey. They clearly violated the social distancing rules then in force. The Northern Irish prosecution, however, ultimately chose not to prosecute any of those present. He limited himself to “voluntarily” questioning some of the leaders, in an investigation that had some farce and some prudence and common sense, to avoid greater evils.

Although no authority has presented conclusive evidence to date, the widespread conviction among Northern Irish society and its politicians points to loyalist paramilitary groups, such as South East Antrim UDA –that remain latent despite the 1998 peace accord – like those responsible for having shaken the waters. The hundreds of protesters who have taken to the streets of Belfast or Derry every night are young people and children (some as young as 12), but no one accepts that it was their own rebellious spirit, spontaneously, that led them to setting cars, containers, or phone booths on fire, or throwing rocks and Molotov cocktails at buses, private vehicles, or police cars.

“Destruction, violence or the threat of violence are completely unacceptable and unjustifiable, whatever the concerns that exist in the different communities,” the autonomous Government of Northern Ireland said in a statement this Thursday, in which they share power. Republicans and Unionists. “Those who try to use and abuse our children and young people to commit these attacks have no place in our society.”

However, the current chief minister, Arlene Foster, of the unionist DUP party, has tried throughout the crisis to play two-way. While he wholeheartedly condemns the violence, he joins the voices of those calling for the resignation of the Chief Commissioner of Police for Northern Ireland (PSNI), Simon Byrne. She also believes that, with her way of managing the funeral of the former member of the republican terrorist organization, she has lost the trust of the unionist community. The walls and fences of the Protestant neighborhoods of West Belfast, Newtownabbey, Carrickfergus or Derry are covered with graffiti against security forces. “PSNI out“(Outside the PSNI) or” PSNI pigs”(PSNI pigs), which are mixed with the slogans against the new border that Brexit has imposed on the Irish Sea, the strip of water that separates the two islands.

The Government of the Republic of Ireland, much more aware than London of the powder keg that exists in the autonomous British territory (Ulster), has called on Northern Irish politicians to work on a response to the current tension “before someone dies”. The Irish Foreign Minister, Simon Coveney, has indicated a clear responsibility in everything that happened: “Statements of the Irish Government will not serve to calm the tension within the unionist communities. The answer must come from themselves ”.

A delicate peace agreement to preserve

Next Saturday, April 10, means a lot to many Northern Irishmen. It will be 23 years since the signing of the Good Friday Agreement, which brought peace to a community ravaged by terrorism and sectarian violence. That is why Belfast politicians have been quick to offer a joint response to defuse the climate of tension. The police have detected that some paramilitary groups have toured the small businesses – coffee shops or grocery stores – that the confinement still allows them to remain open to warn their owners to close on Saturday if they want to avoid damage. The security forces are preparing for a tough weekend in which the unrest will escalate. The peace agreement was the cause of Brussels persisting in imposing a safeguard on Northern Ireland (the so-called backstop) to preserve its internal market without endangering the peace.

The Labor opposition now blames Johnson for not having fulfilled his task as custodian of such a delicate agreement, and for having caused the frustration of the Northern Irish unionist community “with his continuous lies about the true consequences of Brexit.” Labor spokesperson for Northern Ireland, Louise Haigh, has singled out unionist paramilitaries as the main culprits for the ongoing violence, but has also demanded that Johnson exercise political leadership in the region whose absence so far has caused “a vacuum that violence has occupied “.

Check the result of the draw for the Primitiva today, Thursday, April 8, 2021

The developer of “EpiVacCorona” spoke about the benefits of the vaccine