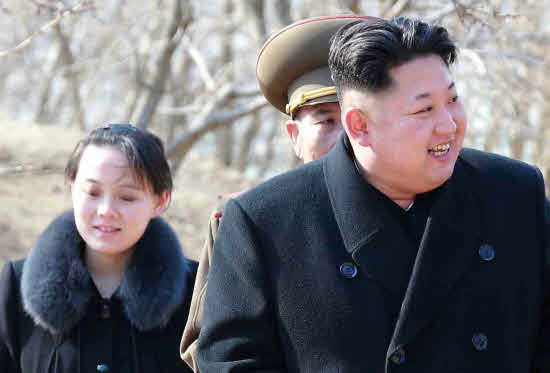 The sister of North Korean leader Kim Jong Un, Kim Yo Jong, has warned the United States on Monday to “do nothing to make them lose sleep” if it wants to “sleep in peace for the next four years,” a warning. which occurs when Washington conducts military exercises with South Korea.

“We take this opportunity to warn the new US Administration that is striving to give off the smell of gunpowder in our region,” Kim Yo Jong has transmitted in a statement, according to the country’s state news agency and reported by CNN.

North Korea has delivered this message when Secretary of State Antony Blinken and Defense Secretary Lloyd Austin flock to the region to meet with their Japanese and South Korean counterparts.

Likewise, the notice has been released while Washington and Seoul carry out simulated military exercises on a reduced scale and hours after the Joe Biden government reiterated that it had contacted North Korea and had not yet received a response.

Specifically, the spokesman for the State Department, Ned Price, has assured that the United States had communicated with North Korea to “reduce the risk of escalation”, but “to date” had not received a response to contact attempts, which began in February, “through various channels.”

“This follows more than a year without an active dialogue with North Korea despite several attempts by the United States to participate,” lamented Price, who reiterated that the Joe Biden Administration is conducting a “comprehensive interagency review. »Of US policy in relation to North Korea.

In this sense, the State Department spokesman recalled that the Government has consulted with “many” former government officials involved with the politics of the Asian country.

For her part, the White House spokeswoman, Jen Psaki, specified that the Administration has a “main channel” and a “series of several channels” to communicate with Pyongyang.

“We have collaborated and will continue to collaborate with other allies in Japan and South Korea to solicit input and explore new approaches. We have listened carefully to your ideas, including through trilateral consultations. Of course, diplomacy is always our goal, “reiterated Psaki, while asserting that the goal is” the risk of escalation “and diplomacy remains” the first priority. “

During the process, the Biden Administration has consulted with former US government officials with experience in North Korean politics, including some Trump Administration officials, as well as allies from Japan and South Korea.

In this context, the sister of the North Korean leader has warned on Tuesday of the possibility of eliminating a military peace agreement with South Korea and dismantling an organ of the Workers’ Party that is responsible for inter-Korean dialogue, according to Yonhap.

Specifically, he has said that South Korea has chosen a “war march” and a “crisis march” rather than a “warm march”, adding that Kim Jong Un will monitor the country’s behavior in the future.

To this, Seoul has responded by calling for calm and specifying that military exercises with the United States should not be used to increase tensions. He has also promised to continue the effort to improve inter-Korean relations and support the promotion of nuclear talks.

Last year, North Korea accused the then President of the United States, Donald Trump, of having broken his word and said that the “empty promises” that he made two years earlier at his first summit with North Korean leader Kim Jong Un had the hope of a nuclearization process frustrated.

The first summit between Kim and Trump ended with a declaration of intent signed by both leaders and with four main points: normalize relations between the two countries, the signing of a peace treaty to end the Korean War (1950-1953) , the repatriation of the remains of US soldiers killed in North Korea and the beginning of a process of total denuclearization of the peninsula.

Despite the fact that Trump and Kim have held two other meetings since then, the two countries have still not made progress in the negotiations to start the denuclearization process. Trump insisted that Kim had to give up nuclear weapons before the sanctions began to be withdrawn, while North Korea asked for counterparts in exchange for giving up this type of weaponry. The meetings did not lead to any results.

These contacts have taken place at the same time that Japan asked the United States to resume the talks for two reasons: the need for the North Korean nuclear program to be dismantled in a “complete” and “inspectable manner” and the return of the Japanese nationals kidnapped by Korea. of the North in the 1970s and 1980s, a conflict that Japan wants to resolve in haste despite North Korean denials because the main complainants – parents of the victims – are dying of old age.

Protests in Germany, the UK and the Netherlands against coronavirus lockdown