Norberto Oyarbide died: the dances that made him viral 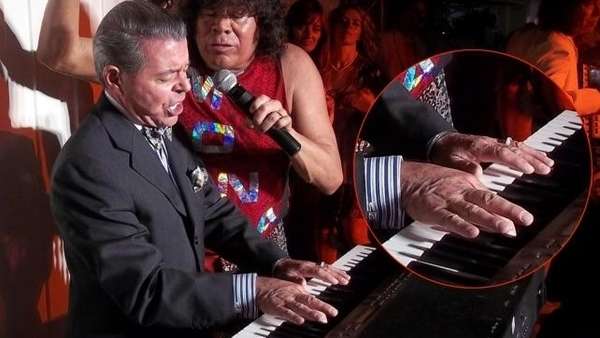 Norberto Mario Oyarbide died this Wednesday, after having spent about two months hospitalized for coronavirus. Without a doubt, one of the most famous federal judges of the last decades. Not only because of the statements and controversial rulings that he had during the more than 44 years that he spent in the Judiciary, but also because of his eccentric and media profile.

In dissonance with any stereotype of a federal judge, in 2011 he took the stage of the dance club “Sargento Cabral” of Carlos Paz, Córdoba, to accompany the historic quarterer in a show Carlos “La Mona” Jiménez.

With his impeccable black suit, a dark shirt with light blue stripes, his inevitable little bow tie and his classic hairdo, he lent himself to everything: he played the keyboard, sang a tango and even dared to roll his hips to the rhythm of “Kiss to Kiss”.

Around 4 in the morning, he stepped on stage and sang “La Último Curda”, by Aníbal Troilo. Then, facing the breath of the public, he started dancing the “tunga-tunga” (Cordovan quartet). To close, he sang and danced – visibly exalted – the hit “Beso a Beso”.

“It was a night of friends in which everyone relaxed and enjoyed the dance. The response of the people was impressive, he received him very well on stage, they applauded him and he even got on, ”Jiménez’s manager, Sergio Delseri, would later tell.

Then, he continued adding new choreographies to his record: in 2016, shortly after his resignation was made official after 21 years as a federal judge, a video showing him went viral dancing at a barbecue held in the taxi drivers union, to the sound of “The most beautiful flower”, by the Memphis La Blusera group.

The media raid that generated the recording made Marcelo Tinelli begin to fantasize about Oyarbide’s presence at ShowMatch.

“Life is so fantastic that it proposes new things every day. Everything that is connected to art does my body very good”, He expressed, after acknowledging that he had received a call from Tinelli.

He even defended himself in anticipation of criticism if he accepted the proposal: “If the President danced the day he was elected by all of us at the Government House, why shouldn’t I dance? Tell me where is the written rule Who do I hurt dancing?”.

Although he flirted with the idea, he finally said no to the host of the great Argentine television show. Nevertheless, their dances did not stop.

Days after his refusal to Tinelli, he repeated the viral choreography when he was interviewed by Georgina Barbarossa and Victoria Onetto in his program “Desgeneradas” in El Nueve.

Tuxedo and bow tie, Oyarbide the little step replied that he put it on everyone’s lips again and even managed to make Onetto – whom he recognized as his friend – break to tears when he said goodbye and thanked him for his presence.

In another video that was broadcast ad nauseam on social networks, Oyarbide improvised with Guillermo Cóppola, Hector Bambino Veira and Ricardo Caruso Lombardi a choreography of “Tirate un paso”, the hit that had launched the Wachiturros to fame.

To close that 2016, another recording. This time, the former magistrate was surprised while dancing at the businessman’s wedding party. Fabian Carballo and the model Natalia Fassi, while playing in the background “All Night Long“by Lionel Richie.

In one of his last media appearances, in November 2020, he attended as guest panelist in Controversy at the bar. This time, he put aside the black tuxedo and dressed in a gray frock coat and tailcoat. “The dark is for parties. This is not for the Central Market, but it is for an interesting afternoon. It is an important mid-afternoon. For the morning too,” he said.

Struck by lightning while taking a selfie, 16 dead

Okami comes to Monster Hunter Rise with this crossover with new costumes to the game. Presentation video (Switch, PC)