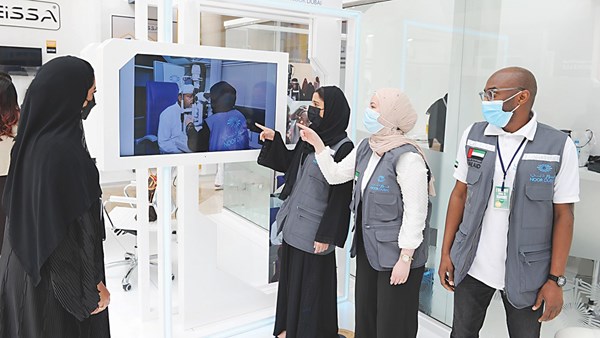 As part of its participation in the Arab Health Exhibition 2021, the Noor Dubai Foundation is reviewing its distinguished efforts and multiple achievements in combating blindness, through a package of its therapeutic and preventive projects and programs, which have so far benefited more than 27 million people around the world representing 18 countries.
The Foundation also implemented a mobile eye clinic program to provide medical examinations and consultations to groups in the local community, which has benefited 29,000 people since the launch of the program in 2014.
Dr. Manal Taryam, Executive Director of the Noor Dubai Foundation, said that the Foundation reviews, during its stand at the Arab Health Exhibition, its continuous efforts to combat blindness in various countries of the world, including the United Arab Emirates.
She added: “In 2016, the Foundation launched a treatment program in the country to provide funding for residents with low incomes to treat difficult eye diseases, as the program includes treatment for diabetic retinopathy, cataract operations or eye injuries, and other difficult eye diseases.”
She pointed out that the program has managed, over the past four years, to treat 230 medical cases within the country.
The Foundation has also implemented a treatment program to combat blindness in remote areas in Asia and Africa, where it has succeeded in providing 287,306 medical examinations, performing 29,474 surgeries, and distributing 67,642 eyeglasses since 2008.
The Noor Dubai Foundation has also been able, through its camps, to provide curative and preventive services to patients in need, as the Noor Dubai camps aim to support economic development in the countries benefiting from its services.
Dr. Manal Taryam said that the Foundation is displaying, within its platform at the Arab Health Exhibition, its successful path in combating tropical diseases through the “Elimination of Trachoma” program in the Amhara region in northern Ethiopia, where, during the past eight years, the Foundation managed to distribute 87 million doses of Medicines are part of the program to prevent the spread of the disease and control the outbreak of the disease in 29% of the endemic areas in Amhara, Ethiopia, where 18,721,151 patients benefited from the institution’s services.