“Nobody uses me and NL cannot depend on the center” 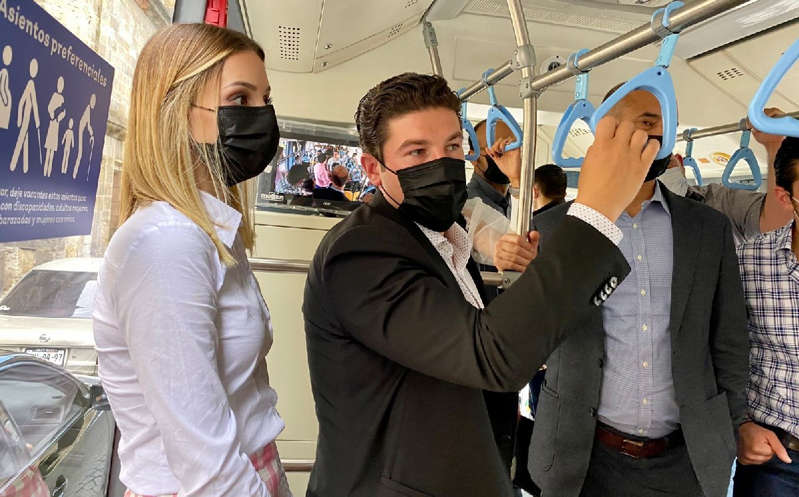 On May 27, we closed the meetings with the then gubernatorial candidates in Meta 21.

Samuel A. García Sepúlveda was the fourth invited to the De Frente forum —but not the last broadcast— with María Julia Lafuente, Josué Becerra and the one who writes this. Here are some questions I asked him:

Given what has happened in the campaigns, do you consider yourself a victim or perpetrator?

Neither one nor the other, architect. This campaign I suffered an unprecedented dirty war, in which they got involved with my family, wife, father, mother, even the Prosecutor’s Office and the Financial Intelligence Unit did it. But me, messing with the family, never.

I invite you to test me, for example, in the case of organ transplantation, I don’t even know the guy, until now I knew that he was only Abel Guerra’s son, not Clara Luz’s. I have no idea what she’s talking about, but I understand her desperation to go fourth and she’s trying to victimize herself.

Clara Luz accuses you of having leaked the file. Who leaked that information that was only in the hands of the authorities?

I have no idea who could have gotten hospital folders, folders I believe from someone who murdered, committed suicide (sic). What I knew was a posteriori, that he wanted to muddy me and that is why what I have said is that I will never mess with anyone’s family.

Where are your academic grades from?

My first doctorate was at Tec, at EGAP, at the Graduate School of Public Administration and Public Policy, first place in Generation, 98 on average. Doctorate in Public Administration and Public Policy. The second doctorate is in Accounting and Finance, which was at ITAC, which unfortunately these days, our rector, Dr. Cubillas, has a bacterium, he is serious.

What can you tell us about your experience in public administration?

The young are discriminated against for lack of years and the elderly for excess years. Do we want young people in government? Do we want older adults in government? I believe that Samuel García can arrive well equipped for a large cabinet.

What is the electoral offer? Adrián de la Garza: six years as mayor of Monterrey and did not fix anything; Clara Luz has been governing Escobedo for 20 years and go to Escobedo to see if there is something to brag about, and Larrazabal has been out of the political scene for 15 years because he ran out of corruption scandals and the Casino Royale.

It is said now that they are using it, both Dante Delgado and the President …

No, nobody uses me, I am very firm that Nuevo León cannot depend on the center. From Mexico they are not going to tell us how, because we are a thriving and great state, as why they are attenuating my ideas and my plans as they are.

What I do know is that there was a breakdown because Andrés Manuel created his party – which by the way copied the Juarista eagle – and began to try to steal the assets of Movimiento Ciudadano, including Delfina Gómez.

Delfina was from Movimiento Ciudadano and Andrés Manuel steals it. And then he tries to steal (Enrique) Alfaro and here they also try to come and ask us to go to Morena, and that’s where Dante says: “Hey, wait for me, not only did I help you 10 or 20 years, but you also want to disappear ”.

That happened how long ago?

Candidate Samuel A. García Sepúlveda… Is the A. from Alejandro?

That’s right, but I like Samuel better… it means “the one who listens to God”.

Well thank you again and … listen to us all. _