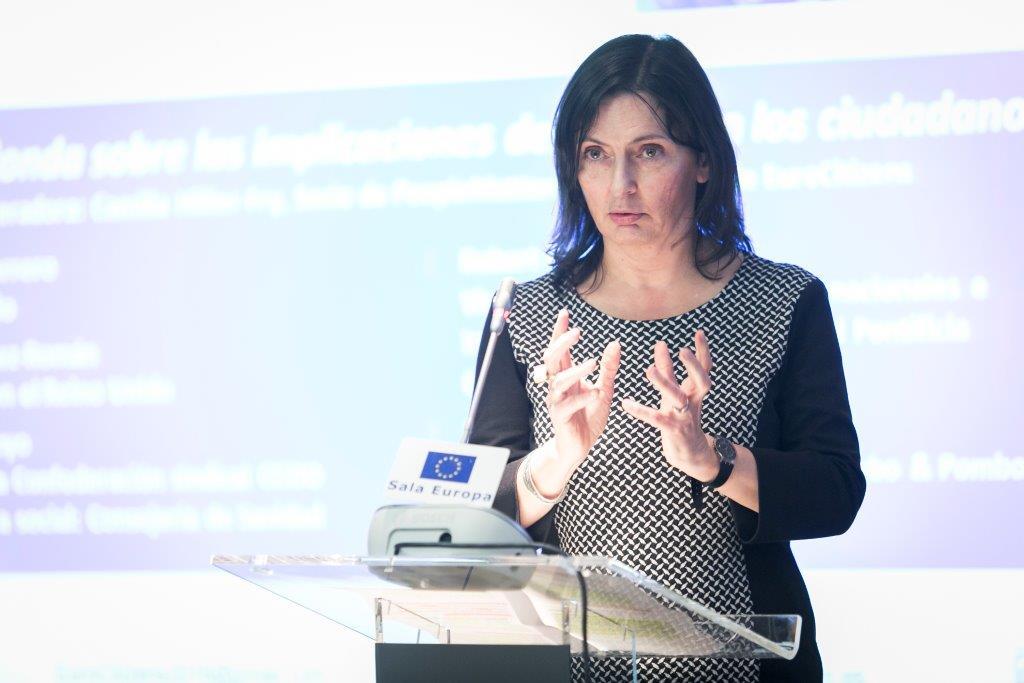 For many Britons, legally resident or not in Spain, Brexit has thrown up a number of complications and confusion, not only amongst the general public but also the authorities in Spain and the United Kingdom. But Camilla Hiller-Fry, the co-founder and Vice-President of the voluntary citizens rights group EuroCitizens, told the Bulletin last week that few people could have really foreseen what the real ramifications of Brexit were going to be because it was an unprecedented event. No country had ever left the European Union before, so, to a certain extent, it was uncharted water.

Camilla has lived in Madrid for the past 30 years. Originally from London, she spent time working in Japan before deciding to base herself and the family in Madrid where, apart from her commitment to EuroCitizens, she works in human resources.

EuroCitizens, while not being aligned to any political party, has close working relationships with all of Spain’s main political parties and ministries. Item was founded in 2016 and its initial mission was to defend the rights of UK citizens in Spain, their rights to live, work and study while also trying to protect the rights of Spaniards working or living in the UK and working for a more tolerant and open Europe.

“Once Brexit was clearly going to happen, we began working extremely closely with the Spanish government in a host of different areas, with the various ministries responsible and also the British Embassy. We, along with other similar organizations across the European Union, began lobbying the authorities about the need to protect the rights of those Britons living legally in Spain and, on the whole, the Spanish government was, and still is, extremely receptive and cooperative.

“Because of the very strong relationship between Spain and the UK, the government realized that Brexit could work in one of two ways. Both sides could either win or lose and the Spanish certainly didn’t want to be on the losing end. Never mind the 300,000 plus UK citizens who legally live in Spain, the amount of investment, businesses and general input to the economy, including that by tourists, is very important to Spain. So the Spanish have tried to do everything possible to make the Brexit process as easy as possible.

“That said, over the past few weeks, there have been a number of problems, which are probably down to a general sense of confusion. We’ve had the problem of Britons not being allowed to board flights because of confusion over paper work and airlines, for example, not being fully aware of what paper work is acceptable. On top of that, there was the issue of passports being stamped.

“We responded to this immediately and took the matters up with the Presidency in Madrid, which is in charge of such matters, and quickly resolved the hiccups. But UK citizens here in Spain have been plagued with a series of problems, such as applying for Spanish nationality or the new TIE identification card. Yes, the Spanish government opened up a fast-track system for British citizens living in Spain to regulate their status in the country, and it did appear to be working well.

“However, due to a lack of resources and the sheer demand for TIE cards, there is a bottleneck and the system appears to have slowed down. The same goes for people who have applied for Spanish nationality. I know of people who applied back in 2016 and 2017 and have heard nothing. They can’t even track their application, so they are in limbo – they don’t know whether to wait, persevere or opt for the TIE card.

“Furthermore, and this dates back to when Felipe II was on the throne, Britons taking out Spanish nationality have to give up their British passport and that does make some British citizens think twice. Residents from former Spanish colonies, for example, are entitled to dual nationality, just like a Spaniard in the UK is, should he or she decide to take out British nationality. So that is an issue which still needs to be resolved.

“On the whole, at the moment, all the reciprocal agreements between Spain and the UK, such as national health care, remain in place, but further down the line things may change, so we are constantly monitoring developments. How long Spain’s fast-track service for UK citizens will remain in place remains to be seen. There will obviously be a cut-off point, so the best advice, which is one the British Embassy in Madrid has done an excellent job in getting across, is to make sure you have your paper work in order. If you are a legal resident in Spain and comply with all the necessary requirements, then no one should have anything to worry about, even if they may be stuck in the present bottleneck. It’s a case of keep calm and patient, there is a system and it is working. That said, UK citizens here in Spain and across the European Union have fallen victim to the bargaining that went on over Brexit.

“Many, in particular young people, have lost the freedom of movement and that is extremely sad and something we would like to redress with Spain and the UK. For many generations, when we were in our early 20s, it was quite normal to travel, work abroad for a while and perhaps remain overseas within the EU; that is no longer possible. The UK is not even a member of the ERASMUS program for university students, so young people have been hit hard by Brexit; their options have been severely curtailed.

“And for the post-Brexit generation wishing to move to Spain for either work or lifestyle choices, the process is completely different. UK citizens are now third country residents, like people coming from Australia or the United States, and will have to go through a whole series of new rules and regulations – obtaining permanent residency, for example, will be a much longer and drawn-out process. But Spain is aware of this and will try and make the process as easy as possible, which sadly is something we can’t say for the UK government.

“Prior to Brexit, UK citizens in Spain or elsewhere in the EU, were protected by the umbrella of the European Union. Now we’re not, and in Westminster there appears to be a certain level of ignorance and an opinion that we’re all sitting in the sunshine drinking gin and tonics all day, when for many it is quite the opposite. We’re working, running businesses, creating jobs, investing in the economy.

“And for those who have retired here, they most probably spent all their working life paying in to the UK system, so they are entitled to choose where they want to live – it’s what they’ve worked for and should therefore be given due care and attention. Yes, perhaps now is the time for British citizens residing overseas to have a member of parliament to defend their rights, similar to France.

“Spain is doing all it can but there are certain EU directives it cannot ignore and these will have an impact on post-Brexit Britons coming to Spain. At the end of the day, we have left the EU but we’re still in Europe, just look at the map. In the meantime, keep checking the Embassy’s website and our Facebook for all the latest developments. ”

Police detained a group of drug dealers in the Irkutsk region