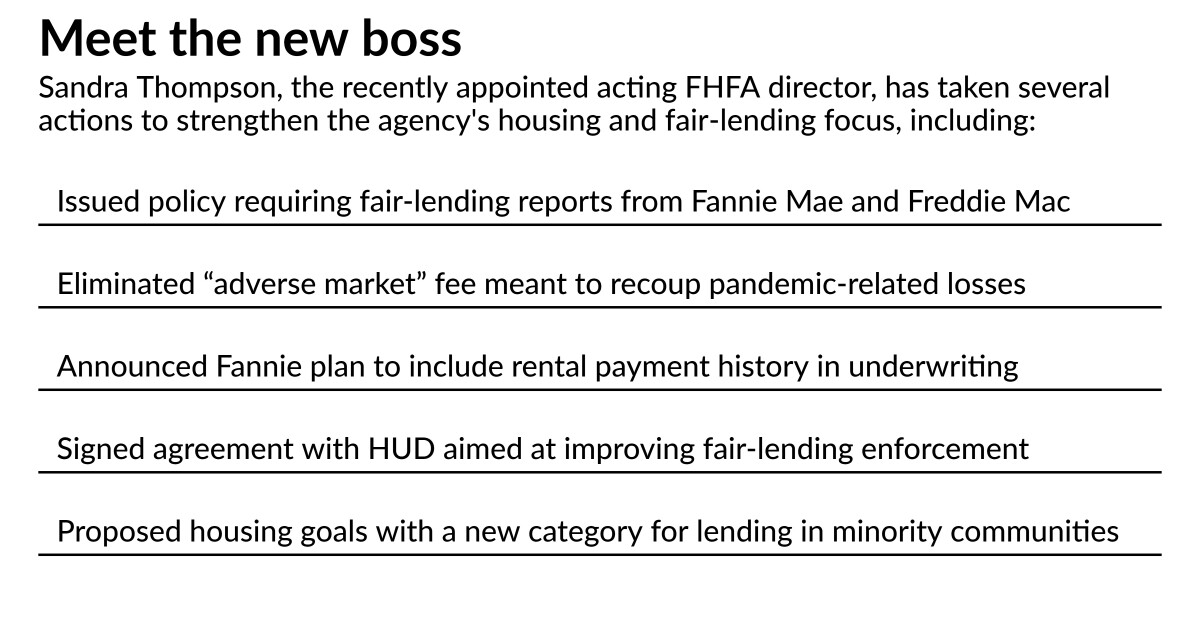 WASHINGTON – In her two months as acting director of the Federal Housing Finance Agency, Sandra Thompson has overseen a major shift in the regulator’s focus, affordable housing advocates say, pointing to policies her team has put in place to bolster fair lending and expand access to credit for first-time homebuyers.

President Joe Biden named Thompson acting director of the agency June 23 after removing Mark Calabria as head of the agency in the wake of a Supreme Court ruling that said the FHFA’s leadership structure was unconstitutional.

Calabria – appointed by former President Donald Trump – largely devoted his tenure to putting the government-sponsored enterprises on a path out of conservatorship. Under his leadership, the agency finalized a post-conservatorship capital framework and entered into an agreement with the Treasury Department to allow Fannie Mae and Freddie Mac to retain earnings and hold significantly more capital.

But many expressed concern that Calabria prioritized the safety and soundness of the GSEs over the fundamental mission of Fannie and Freddie: facilitating affordable homeownership. Those same observers are encouraged by what they see as a sea change under Thompson.

“The pace of announcements coming out of FHFA is fairly impressive,” said Andrew Jakabovics, vice president of policy development at Enterprise Community Partners. “It’s just night and day in terms of a change in priorities from what it previously had, as an agency.”

Since Thompson took the helm, FHFA has eliminated the adverse market fee on most refinanced mortgages that was put in place to protect Fannie and Freddie from pandemic-related losses, but that also raised costs for homeowners.

Earlier this month, FHFA also entered into an agreement with the Department of Housing and Urban Development aimed at strengthening fair lending-enforcement for the GSEs as well as the Federal Home Loan banks. Also this month, FHFA proposed affordable housing goals for Fannie and Freddie that included a subcategory covering lending to minority neighborhoods for the first time.

David Dworkin, the president and CEO of the National Housing Conference, called the actions FHFA has taken under Thompson “extremely encouraging.”

“We absolutely need credit standards to be relaxed, but they need to be relaxed in a way that is responsible, and that really embraces the idea of ​​compensating factors,” he said. “I think that certainly, Director Thomson gets that, and that we can responsibly expand the credit box without adding unnecessary or irresponsible risk.”

FHFA also announced this month that Fannie would begin to incorporate rental payment history into its mortgage underwriting process starting in September, a move that aims to increase access to homeownership by widening the pool of potential borrowers.

“We’ve been advocating for this for years, because renters need an opportunity to build their credit,” said Doug Ryan, interim vice president for policy at Prosperity Now. “Often renters, particularly renters of color, but also immigrant communities and others, have nonexistent credit files and credit portfolios, and this is an opportunity to build it up.”

Factoring rental payments into a potential borrower’s credit assessment could also be a step toward addressing the racial gaps in homeownership rates, said Jakabovics.

“Incorporating [rental payments] is really, really powerful, and I think reflects the reality that there are a lot of people who could be homeowners [and] should be homeowners, and that the system isn’t necessarily well-geared to adapt to the circumstances that people are dealing with now, ”Jakabovics said.

The disparity between Black and white homeownership has been widely documented, and is even larger today than it was in 1960, before the Civil Rights Act passed. The US Census Bureau found that as of the second quarter of 2020, Black homeownership stood at 47%, compared to 76% for white Americans.

That effort by Fannie is indicative of a wider shift at the GSEs that has taken place as of late, Ryan said.

“I also see just from Fannie and Freddie, kind of informally, a new vigor in investing and exploring new opportunities to meet their mission,” he said.

Dworkin pointed to FHFA’s new leadership as one of the reasons behind the announcement of the program at Fannie, and added that he expected Freddie would soon follow with a similar program.

“I think there are two things here: one is the innovation itself is important,” he said, “but the second is that the idea that the regulator is looking at these kinds of innovations and approving them is also important.”

Affordable housing advocates also say they are heartened by the memorandum of understanding that FHFA entered into with HUD earlier this month that will enable the two agencies to share information and coordinate investigations and compliance reviews. Although it’s unclear as of yet what the implications of that agreement might be, many agree that it sends a clear message that FHFA is serious about fair lending.

“FHFA, while they’re not the front and center of fair housing, they have an obligation as a regulator to ensure that Fannie and Freddie and their seller services are in compliance with fair housing and fair lending laws,” said Ryan. “That’s sending a signal that this is important to the new leadership at FHFA, and if nothing else, that’s pretty important.”

Under Thompson in July, the agency also released a policy statement on fair lending, affirming that it will not tolerate illegal discrimination in mortgage lending.

“Broadly speaking, [Thompson] is clearly troubled by and trying to find ways to address the fact that the enterprises are not purchasing very many loans to Black borrowers, and I think that’s been expressed in a variety of ways, ”said Jesse Van Tol, CEO of the National Community Reinvestment Coalition.

Many pointed to Fannie and Freddie’s “duty-to-serve” plans as next on the agenda for FHFA. Under the Housing and Economic Recovery Act, the GSEs have a “duty to serve” three specific underserved markets – manufactured housing, rural housing and affordable housing preservation – and are required to prepare plans as to how they intend to fulfill that requirement.

Fannie and Freddie’s duty-to-serve plans for 2022 through 2024 were unveiled in January under Calabria, and the comment period on the plans closed last month. Several in the affordable housing space now hope that under new leadership, FHFA will direct the GSEs to craft stronger duty-to-serve plans.

“We think, along with lots of other people, that they could do a lot more in the three components of the three underserved markets of duty to serve, and I honestly believe that Fannie and Freddie think that too,” said Ryan.

Van Tol agreed, adding that Fannie and Freddie have work to do to expand access to credit, which could be accomplished through robust affordable housing goals and duty-to-serve plans.

Ideally, Thompson will get the GSEs back to their core mission, “appropriately balancing their mission responsibilities along with the requirement that they be managed in a safe and sound way,” said Dworkin.

“If the enterprises aren’t going to be involved in expanding this liquidity for the affordable housing market, why do they exist at all?” he said. 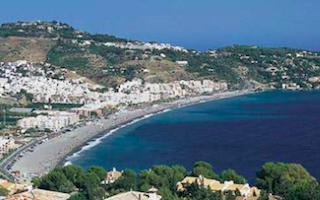 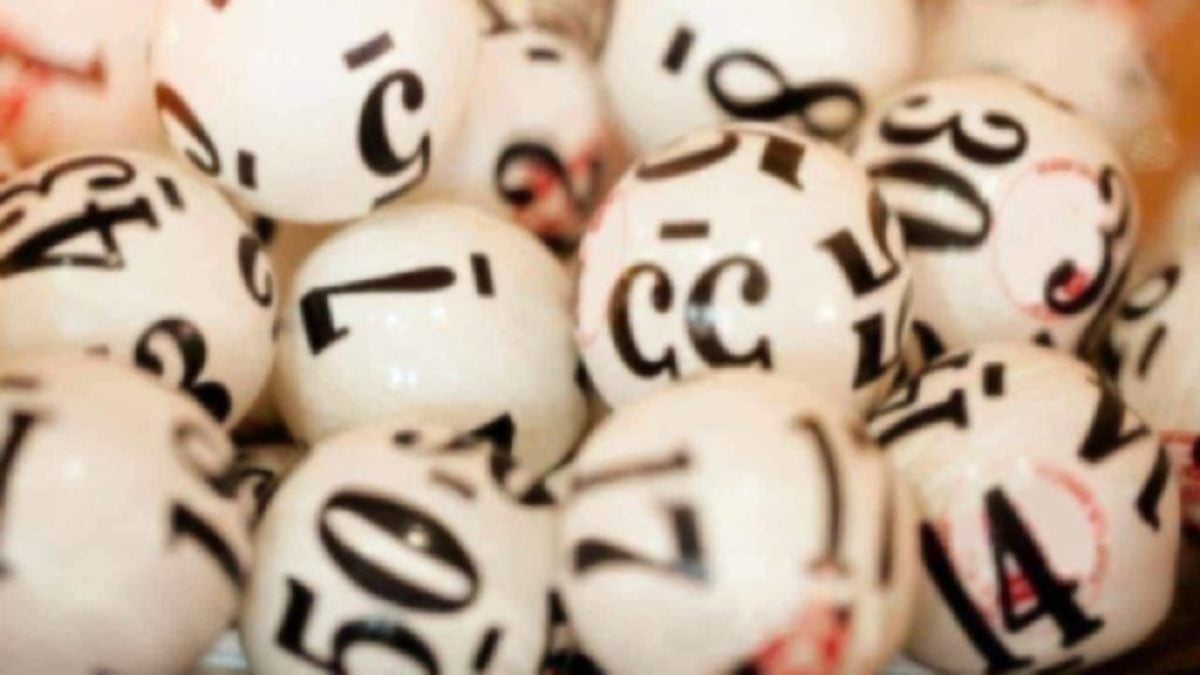