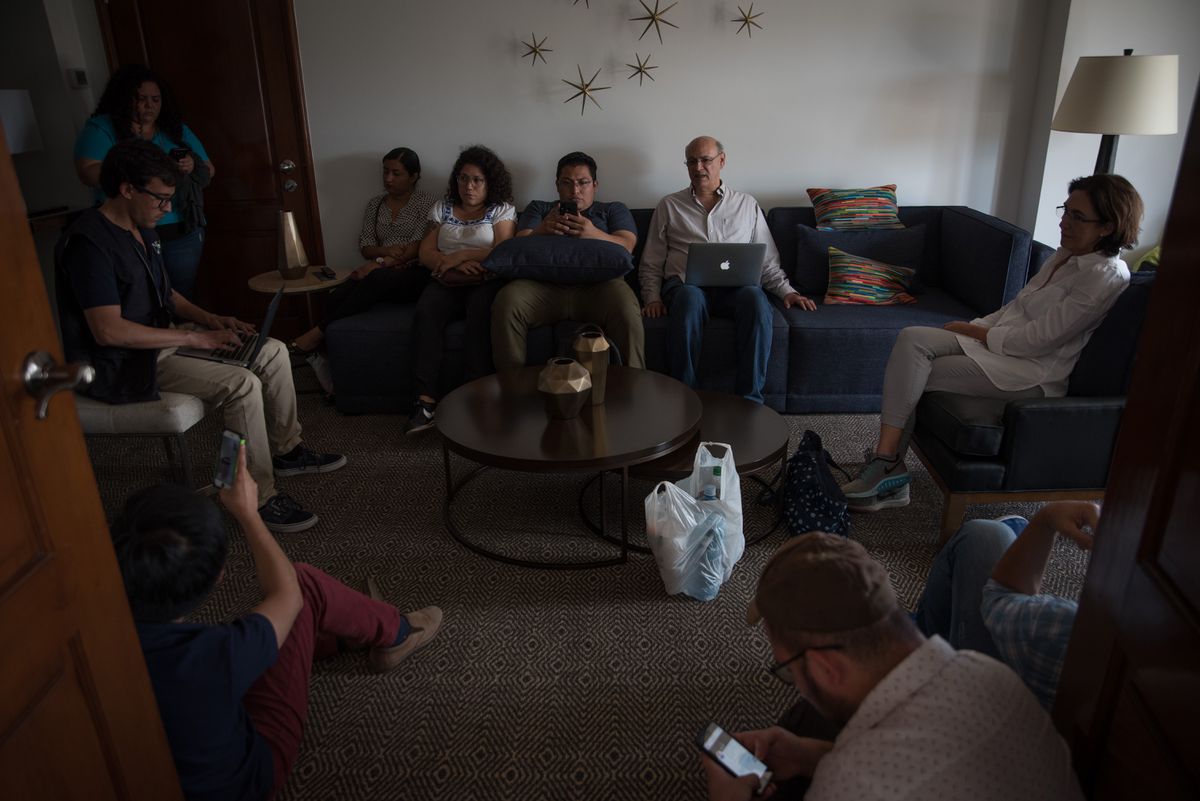 The last time Julio Cortázar made a trip, he was in Nicaragua; hence a short book was born which he entitled Violently sweet Nicaragua, that Mario Muchnik published in Spain and that it would be, in 1983, the last to come out of the pen of the author of Hopscotch, died the following year in Paris. In that short volume, the Argentine writer, in love with the Revolution, demanded blind faith to save from imperialism the achievements of the Sandinista Front that overthrew Somoza. Today the dictator does not seem very different from the heir to that revolutionary uprising, since Daniel Ortega, with his wife, Vice President Rosario Murillo, keep Nicaragua under a silence of steel, against which journalists rise up, at the risk of their lives. who want to break the silence that hangs over a hypervigilated population. EL PAÍS has spoken with some of the protagonists of that unequal struggle, journalists who are either in exile or living in their land under the threat of jail. They speak of a violently silenced country.

Caught at home. “I am Carlos Salinas Maldonado. I live in exile in Mexico, I work for EL PAÍS. After the protests and the 2018 student massacre, Ortega’s target was the press. Worked for Confidential by Carlos Hernando Chamorro and for this newspaper. My coverage of that massacre cost me persecution in the Sandinista Front networks. They used my homosexuality saying that I mistreated my partners, they made montages with men with swollen faces. They said it was because of blows that I had given to those people. I was one of the victims of those campaigns. Armed patrols were chasing me. When I went to cover the celebration of the 41st anniversary of the Revolution, the date that Ortega kidnapped, I took comrades from EL PAÍS to the plaza, I went to the press platform, one of the regime’s lieutenants identified me and suddenly an enraged horde came To harass us, someone threw me to the ground and they started kicking me until the police took me out of there. I was practically imprisoned in my house, while campaigns against me raged through the networks. That November 26 I was talking at home with the journalist Sofía Montenegro. They tell him that they were going to enter my house that night, and Chamorro confirms this in another call. I took refuge in the home of a family. Two days later I went into exile in Mexico. At first he had thought the persecution was sheer intimidation. Until I saw how Ortega’s followers entered and kidnapped colleagues like Lucía Pineda or Miguel Mora. At that time I was missing the history of my country. It was the brutal continuation of what Ortega had done since he returned to power in 2007: create his own media, make the press state. In 2018 the attack was generalized against the profession and the symbol was the murder of Ángel Gahona, a journalist. The escalation continues and may intensify before the November elections, because the Ortegas are not willing to leave power. “

The newsrooms are confiscated. That of Confidential de Chamorro is now a maternal place of those created by Rosario Murillo. The persecution and the siege, the illegal media raids, the surveillance of journalists’ houses, the censorship of those who want to access information, controlled by Rosario Murillo, the defamation of social networks continue. Those who have left Nicaragua do online journalism, “and it seems,” says Salinas, “that there is more desire than ever to do journalism, especially on the part of young people who feel embraced by a society fed up with having their media”.

“They have not been able to shut us up.” Says Chamorro, returned from exile: “They have not been able to silence us, that is the fundamental thing. They physically assaulted the Newsroom, but we have never stopped reporting, not even on the day of the assault; This is explained only by the commitment of the press, but also by the existence of the Internet. Computers were stolen from us but our signal has always been present. They censored open television and we kept producing the programs through YouTube and social networks… If I had been in prison, I would not have been able to do it, as happened to other colleagues. I was forced into exile in order to continue doing journalism. I spent eleven months in Costa Rica with support that allowed me to organize with other colleagues and return at the end of last year, always with the office confiscated, but always giving journalism testimony … It is hard: we are under great tension, I do not have no guarantee of safety for me or my family, I live behind a police checkpoint that checks my entrances and exits for twenty-four hours. Faced with fear, the only thing we can do is adopt certain basic protection measures in order to continue reporting. The worst moment was in December 2018. I learned information about the regime’s decision to capture me and take me to jail, as they did with Miguel Mora and Lucía Pineda, who ended up six months in jail, tortured, isolated, subjected to a trial criminal without evidence. The regime had also decided to arrest me, and for that purpose it had fabricated a criminal case… In Nicaragua we lived almost three years in a de facto state of siege, in practice the constitutional guarantees are nullified. Now there are more than fifty journalists in exile. And those of us who work here are watched by fanatics who, in some areas, raid our homes, along with the police. Now there are sectors tied to nostalgia for what the Revolution was, to symbols that no longer represent anything of what that period in our history was, but rather an aggravated replica of what the dictator Somoza was ”.

At the drug clinic … “What was my station”, says Miguel Mora, director of 100% News, “It is now an imitation of an anti-drug clinic installed there without any legal argument… Military and paramilitaries seized the building on December 21, 2018. I was kidnapped, there was no trial, they never had evidence and I was amnesty for something I never committed. Now I am a member of the National Coalition, which aspires to run as a candidate for the presidency of the Republic in the November elections … The situation of journalism is one of pure persecution, a threat to journalists and their families … There are journalists who are requisitioned At their jobs, they beat them, they threatened them and their families with death. The dictatorship in Nicaragua considers that being a journalist is being a terrorist. And being a young journalist is even more dangerous. They killed a journalist in full swing, confiscated all the important media and put us in jail: all of this generated fear and exile. Now everyone who works here is watched and at risk. I am a confiscated journalist, a former political prisoner, I cannot practice my profession and my channel is confiscated and without any legal protection. Nor am I a free man: when I have to go out to do something the police stop me. Paramilitaries have shot me or stoned me…. I was born in 1975, under the Somoza dictatorship. I hope I don’t die under a Sandinista dictatorship ”.

“Useless as journalists.” Lucía Pineda was imprisoned just like Miguel Mora. Six months, “in total isolation, without any crime. We had only counted the 2018 Ortega massacre… When they released me, my family brought me to Costa Rica. 100% News it has suffered Sandinista cruelty, journalists are treated as criminals; the regime does not stop censoring and persecuting, and the media in which we worked are presided over by portraits of the Ortega-Murillo marriage. This is an election year at high risk. Freedoms are on a red alert. We hope that the world will turn its attention to what is happening to exert pressure on this regime, which acts under the protection of many weapons in the hands of fanatical paramilitary groups that not only put the lives of journalists at risk but also those of all Nicaraguans. Those of us who tell what happens make us useless. They want us useless as journalists and, as citizens, they force us to look like enemies of Nicaragua ”.

Free homeland to live … This past April 14, the poet and journalist Daniel Rodríguez Moya, a Granada-born passionate about Nicaragua, presented in Madrid his documentary about the three years that have passed since the 2018 insurrection against the Ortega / Murillo regime. With unpublished materials, obtained despite police or paramilitary surveillance, it contains testimonies from Ernesto Cardenal, Sergio Ramírez, Gioconda Belli or Carlos Mejía Godoy, and is the chronicle of that repression that cost five hundred lives. With him and with the Nicaraguan journalist Tamara Morales Orozco, who works from Madrid to Own agenda, we meet in a bar in Madrid. It happens whenever a Spaniard meets someone who lives or has experienced the change of skin of Sandinismo, from a revolutionary illusion to a paramilitary dictatorship: how does one experience the ignorance of this situation outside the country that experienced the Somoza dictatorship? ? Tamara says: “There is still a sector of the left here that is not convinced that the romanticism in which they continue to believe is over … The brutal retaliation of the student revolt is the final matter for that band to fall.” The documentary explains the present by talking about the past.

Cortázar said, addressing the revolutionary soldier Tomás Borge at that time Violently sweet Nicaragua: “You live with Nicaragua, and today your people are the most alive people in the world, the most beautiful and the freest.” Now it is a people that lives violently silenced.

Russia fights back and expels 20 Czech diplomats from Moscow

“He asked me for 2,000 euros to get me the Certificate of Fitness for transport”