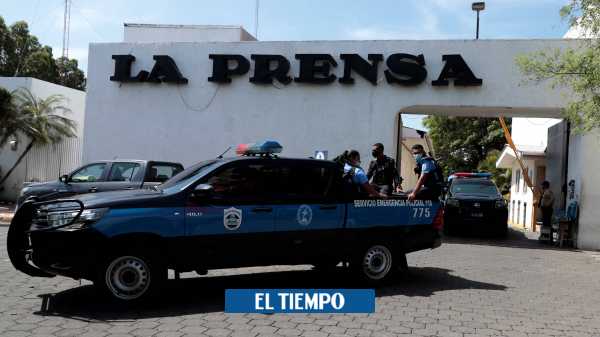 The Government of Daniel Ortega, through the Attorney General’s Office, delivered this week to the authorities of the National Technological Institute (Inatec) a building owned by the newspaper La Prensa, the oldest in Nicaragua, and that has been occupied by the Police for a year.

The authorities will build the “José Coronel Urtecho, The Past Will Not Return” Cultural and Polytechnic Center on this industrial site, valued by La Prensa at nearly 10 million dollars.

(You may be interested: This is Daniel Ortega’s crusade against the Catholic Church in Nicaragua)

The Attorney General of the Republic, Wendy Morales, handed over the documents of that building to the executive director of Inatec, Loyda Barreda, during a restricted act this Tuesday held at the headquarters of the newspaper La Prensa.

Hours before that act, La Prensa, founded on March 2, 1926, denounced the “robbery” and “de facto confiscation” of its industrial plant in Managua by the Ortega government.

“The facilities of the newspaper La Prensa woke up this Tuesday, August 23 without the sign that had the name of the oldest newspaper in the country,” said that medium, which advanced that “with this action begins the circus that the Ortega Murillo dictatorship will carry out to make official the theft of goods from the industrial plant of Editorial La Prensa”.

What will be done in the building?

The vice president of Nicaragua, Rosario Murillo, said through official media that “those places that have been dens of machinations of crimes against humanity, today are centers for deep spirituality.”

“These are the final days of hate, because this blessed country and our people, God’s people, demands, daily demands peace and good, harmony, security, tranquility,” said Murillo, who worked at La Prensa in the decade from 1970.

“In the Don José Coronel Urtecho Cultural and Polytechnic Center the past will not return,” said the also wife of President Ortega.

(Also: The Pope urges dialogue between the Church and the Government in Nicaragua)

Installations of the newspaper La Prensa, in Nicaragua.

Participating in the activity, among other officials, were the presidential adviser for education issues, Salvador Vanegas; and the co-director general of the Nicaraguan Institute of Culture, Luis Morales Alonso.

The facilities of La Prensa, located in an industrial area in the north of Managua, have remained in the hands of the National Police since August 13, 2021, when the Nicaraguan authorities alleged that the media outlet was allegedly used to commit crimes of “customs fraud”. , laundering of money, goods and assets”.

Its general manager, Juan Lorenzo Holmann Chamorro, nephew-in-law of former president Violeta Barrios de Chamorro (1990-1997) -who defeated Ortega in the 1990 elections-, was sentenced on March 31 to nine years in prison for the crime of “money laundering”.

(You can read: Nicaragua: IAPA warns of deteriorating health of six imprisoned journalists)

This Wednesday, the newspaper La Prensa responded to Ortega and stated that “those buried will be them.” “Once again they want to bury us, and as has happened on other occasions, they will be buried,” the Board of Directors of that newspaper said in a public statement.

In the document, entitled “The past is them,” the newspaper highlighted that since March 1926, when it was founded, La Prensa “has been consistent with its commitment to cultivating and promoting values ​​that are so essential for Nicaraguans, such as truth,
justice, the defense of public liberties and democracy”.

In its 96 years of life it has suffered closures, imprisonment of managers and journalists, the murder of its director Pedro Joaquín Chamorro

And that assuming those “values ​​with honesty and firmness, and not with empty rhetoric”, has implied “taking very serious risks”, because “the abuses, lies, authoritarianism and corruption, among other anti-values, have representatives very powerful and cruel” in Nicaragua, he added.

La Prensa indicated that in its 96-year history “it has faced three dictatorships that have seen “the Nicaraguan newspaper” as an obstacle.”

“In its 96 years of life it has suffered closures, imprisonment of directors and journalists, the assassination of its director Pedro Joaquín Chamorro Cardenal on January 10, 1978, bombing and burning of its facilities, siege by fanatical mobs, censorship, customs blockade of the supplies that make it possible to print, and, finally,
the occupation and theft of their real property, their facilities and work equipment,” he summarized.

(Also: Nicaragua: regime expels nuns from the order created by Teresa of Calcutta)

The newspaper assured that it will not respond to the threats of the dictatorship.

La Prensa, which now only publishes digitally, has said that among the assets seized from its headquarters are a $2.01 million rotary press and a $3.89 million commercial printing press, with ability to print, bind or glue, “books, pamphlets, brochures, flyers, and any other printed material, including ballots.”

The newspaper, whose editorial staff was forced into exile last July after the arrest of two employees, has also warned that the Nicaraguan Constitution, in its article 44, prohibits confiscation, and that the State can only seize private property. when those affected are compensated, and that has not been the case.

La Prensa becomes the third media outlet whose facilities have been occupied and used by the Ortega government.

The other two are the buildings where the digital magazines Confidencial and Niú and the television programs “Esta Semana” and “Esta Noche” operated, directed by journalist Carlos Fernando Chamorro, who went into exile; and that of the channel 100% Noticias, critical of the Government.

(You may be interested in: Nicaragua: the lethal blow that the Ortega regime inflicts on culture)

The State has not explained the adjudication process for the installations of these buildings. Efe has tried to obtain an official explanation from the Government about the procedure against these buildings, but this has not been possible.

Nicaragua has been going through a political and social crisis since April 2018, which has worsened after the general elections on November 7, in which Ortega was re-elected for a fifth term, fourth consecutive and second along with his wife, Rosario Murillo, as vice president, with her main contenders in prison.

Nicaragua: this was the expulsion to the OAS in Managua

‘Ortega is usurping the entire legacy of the Sandinista Revolution’

Why did Daniel Ortega close the Academy of the Language in Nicaragua?