“Neymar and Mbappe tension” at the summit of Saint-Germain and Lille! 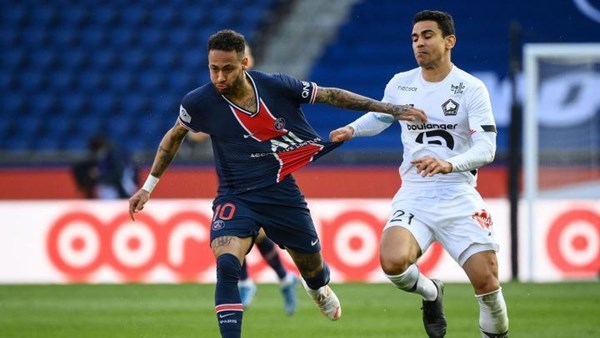 Attention will be focused on the two Brazilian stars Neymar and Kylian Mbappe, during the confrontation of their leaders Paris Saint-Germain to its host and runner-up Lille in the third stage of the French Football Championship on Sunday, especially after the controversy over the identity of the first penalty shooter in the ranks of the capital team.
The tension appeared between the players during the last match of Saint-Germain against Montpellier 5-2, which saw Kylian Mbappe miss a penalty kick, and then another one was awarded to the Brazilian successfully, preventing the French from paying it, despite the latter’s request to do so.
Mbappe was not well from the first moments of the match, and when he hit a cross that turned into a goal by mistake from one of the Montpellier defenders, he did not celebrate as he should, and he also took actions on the field that were not worthy of his reputation and failed his colleagues and club supporters alike, according to press reports. and comments on social media.
When the Portuguese midfielder Vetnia walked the ball in the middle of the field, with Mbappe to the left and Argentine star Lionel Messi to the right, he passed towards the latter, which Mbappe did not like, and he suddenly stopped running towards the penalty area to complete the attack.
To make the situation even more complicated, Neymar liked a “tweet” in which Mbappe was criticized for his actions.
Local reports reported that the sporting director of the French club, Luis Campos, and coach Christophe Galtier met the players, in an attempt to lighten the atmosphere, noting that the dispute between them came against the background of Neymar’s knowledge of Mbappe’s desire to encourage Paris Saint-Germain to get rid of him.
Neymar starred remarkably at the beginning of this season in the Champions Cup match against Nantes, then in the first two matches against Clermont and Montpellier in the local league, by scoring three goals and making three assists, in addition to his double against Nantes, while Mbappe was playing against Montpellier first match after recovering from injury.
Galtier will return specifically to a visit to Lille, his former club, who managed to lead him to the title in 2021 at the expense of Saint-Germain, specifically before moving to supervise the training of Nice, and Lille, under the supervision of Galtier, inflicted a crushing defeat on Saint-Germain 5-1 in April 2019, which Saint-Germain responded in February Past.
Lille also receives its former midfielder, Renato Sanchez, who recently moved to Saint-Germain.
He hit Saint-Germain in his first three matches in various competitions, scoring 14 goals and conceding only two goals.
On the other hand, Lille started his French league campaign in a good way under the leadership of his new Portuguese coach, Paulo Fonseca, by scoring four points in two matches, with a wide victory over Auxerre 4-1 and then drawing with Nantes 1-1 away from his stadium.
At the “Veloderum” stadium, Marseille supporters are awaiting the decision of Croatian coach Igor Todor to include captain Dimitri Payet when he receives Nantes.
Payet, one of the most prominent pillars of Marseille in recent seasons, participated in the first two matches of his team, as he played 20 minutes last Sunday against Brest 1-1 and only a quarter of an hour against Rennes 4-1 in the first stage, and he even refused to wear the captain’s armband when his colleague Matteo Guendouzi gave it to him. .
Marseille supporters are also waiting for the first participation at the “Velordome” stadium for Chilean striker Alexis Sanchez, who has been transferred from Inter Milan. 11-year-old boy on a bike killed by a car in Milan, the driver arrested: he was drugged, without a license and had a leg in plaster