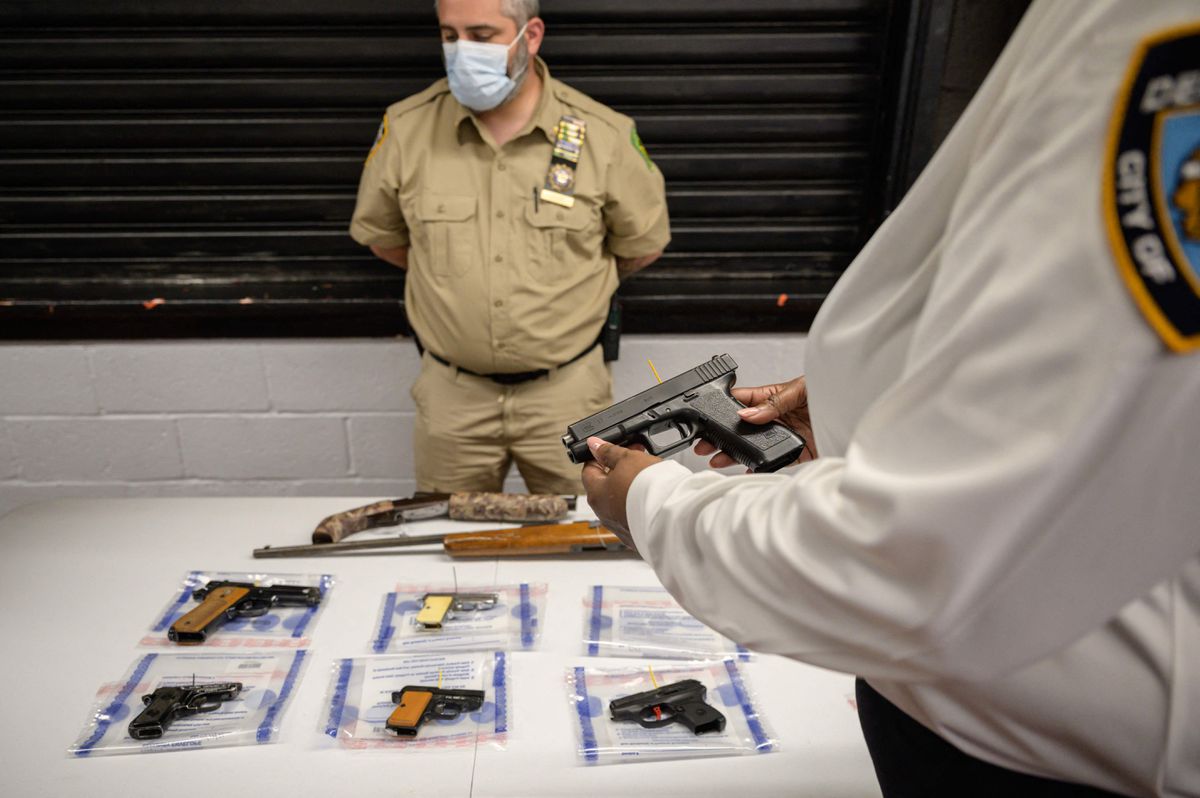 “Incident in progress. Avoid the intersection of 103rd Street and Amsterdam Avenue. The agents try to secure the area ”. The residents of a New York neighborhood received that message from the Police on their mobile phones on May 25. Two young men were facing shots after two in the afternoon, hiding among the parked cars, the barrels of their pistols flashing intermittently in the sun to the rhythm of the shots, like one more scene from so many good and bad movies. It happened in a middle-class neighborhood of Manhattan, residential and commercial, very far from the areas considered conflictive or marked by its criminal activity.

After the bloody eighties and nineties, and the later pacification off the streets, gun violence has returned to the heart of American cities. Two weeks earlier, in mid-May, a four-year-old girl was wounded by a stray bullet in a shooting in Times Square, New York’s tourist epicenter; a Saturday in the middle of the rush hour of shopping and walks. The phenomenon is an upward trend in the US since the spring of 2020, and a drag on the successful recovery from the pandemic.

Los Angeles registered 350 murders last year, the highest number in a decade, with a 36% increase compared to 2019. In New York, where homicides increased in 2020 by about 45%, the rebound monopolizes the messages of the mayoral candidates in the final stretch of the campaign. Fear of the pandemic and racial protests last year triggered the sale of weapons, a fifth of which were acquired by neophytes. Any given week last May, remember The New York Times, 1.2 million background checks were checked, one of the requirements to buy a gun. According to estimates by the Everytown Research Center, based on background checks, 22 million guns were sold in 2020, 64% more than the previous year.

The massive purchase filled the houses with weapons precisely when children spent more time in them, due to the suspension of classes, and domestic accidents with weapons and with minors involved in them soared between March and December 2020, to represent the 30 % more than in the same period of 2019, according to Everytown Research. It has also fueled gender threats and assaults.

In January, a group of researchers analyzed data from 129 Metropolitan Police departments in the country. Those in the largest cities reported an increase in homicides (three out of four agencies) and “nonfatal” shootings, that is, no fatalities (four out of five departments). Neutral and detailed statistics that barely manage to mask the absurd death of the neighbor on 34th Avenue in Elmhurst (borough of Queens, New York) who appeared one night when she heard noises in the street, and was shot dead in the fall past. “Some kids were trying to steal a car parked in front of the woman’s portal, who lived in the first one. Hearing strange noises, he leaned out the window and turned on the light offered a perfect target. The boys shot at the window and the poor thing died on the spot ”, remembers Pam Wade naturally, who lives two doorways down and heard the shots from her house. “But it has not been the only fatal incident during the pandemic in the neighborhood; weapons are everywhere, because people are afraid ”, adds Wade, who establishes a perverse causal relationship: weapons as a remedy against fear.

The trail of fatalities in that neighborhood does not stop; the last one, Wednesday. In parking lots, homes, bars. Even passengers in a taxi, in Elmhurst or also in Brooklyn, shot at point-blank range, a retail that only the neighborhood newspapers now report. Especially in the most disadvantaged areas, because the pandemic and the epidemic of armed violence reflect and intensify a longstanding social and racial inequality in access to health, housing, education, but also in exposure to environmental hazards, according to the experts, of whom violence with firearms would be the clearest exponent.

For a few weeks the presence of police officers is more than evident in the New York subway, which after the total reopening of the activity has returned to work 24 hours a day. In pairs, the agents enter and leave the wagons because the city is on an electoral campaign and the security demonstration is a crucial asset for most of the candidates. Candidates who, one after another, approached Times Square in mid-May after the shooting that injured the four-year-old girl, and the two adults who accompanied her. “Nothing will work in New York if there is no public safety, and for that, we need the police,” said the favorite to the mayor, Andrew Yang, in situ. “We must cut the supply routes for weapons, which come from outside the State, and involve the Police more in the neighborhoods,” repeats Kathryn Garcia, a supporter of police reinforcement and of removing 10,000 illegal weapons from circulation in their first year of mandate.

The mention of the Police has focused the debate in an uncomfortable way for some candidates, those in favor of cutting funds from the security budget to finance social programs. The slogan defund the police (to remove funding from the police), coined in the anti-police brutality demonstrations that followed the murder of African American George Floyd in Minneapolis in May 2020, has been transformed in some places into refund the police, re-invest in the police. An example is the city of Los Angeles, where the mobilizations of that time pushed the authorities to subtract 150 million dollars from the budget of the municipal police (8% of the total). Just one year later, the city just approved a new injection of funds to hire 250 more police officers amid the upsurge in violence. New York could follow that path, depending on who is the candidate elected as mayor in November.

While Texas is preparing to adopt a law that will allow those over 21 years of age to go armed without the need for a license, the government agency responsible for managing the measure (Office of Alcohol, Tobacco, Firearms and Explosives, ATF, in its English acronym ) has been without a director for 13 of the past 15 years, undermined by the all-powerful National Rifle Association (NRA) and its generous donations to politicians. President Joe Biden, who announced gun ownership control measures in April, intends to bridge the gap in the ATF with a candidate in favor of stricter regulation, which obviously does not please Republicans as the NRA statutorily mutates as who changes his shirt, without losing influence.

Although homicides only represent a third of deaths by firearms (65% correspond to suicides), the daily violence in the main cities of the United States – a stain that stains red, especially in the eastern part of the United States. the country – the municipal authorities are extremely concerned, faced with an exponential growth in street violence, often linked to gangs: a New York Police officer was injured this week when members of a gang shot at her house to punish her brother, also a gang member. If the activity of the organized groups is added to the large number of children with access to guns in their homes and the proliferation of ghost guns (ghost weapons, home-made), the probability that a four-year-old girl, or a neighbor from a modest neighborhood, will end up being shot is multiplied exponentially, just like the routine notices via SMS from the Police.