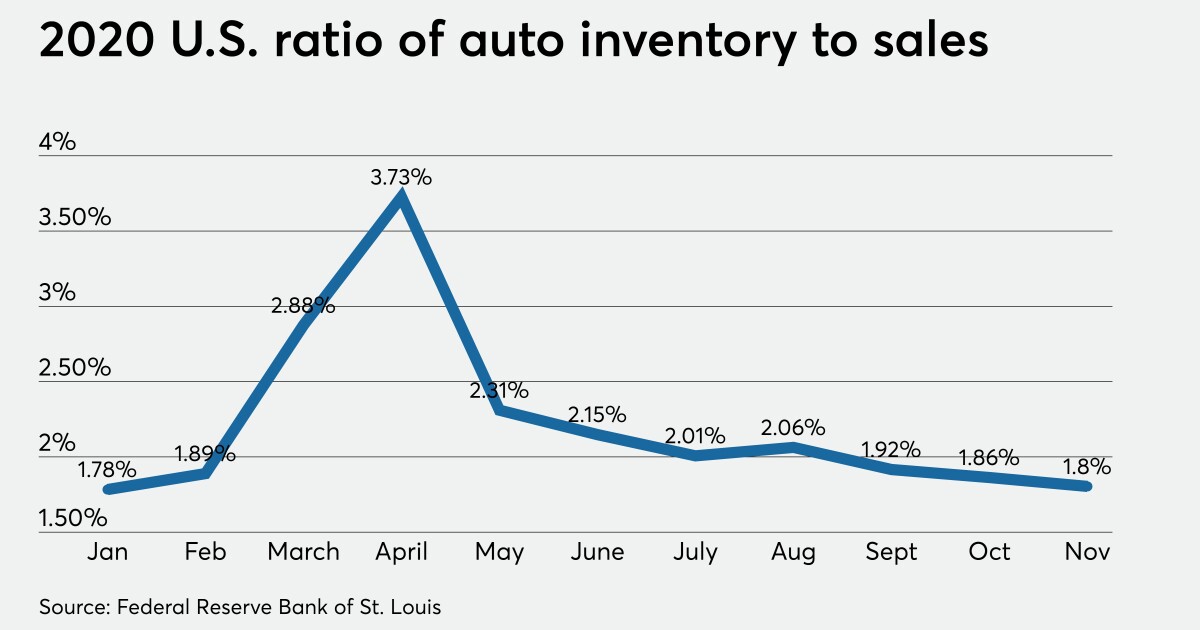 A shortage of new cars could have an impact on a competitive but otherwise healthy auto lending market in 2021, credit union leaders say.

Auto manufacturing has seen a slowdown driven by reduced demand resulting from the pandemic and economic slowdown, as well as a recent shortage of semiconductors, according to one recent Wall Street Journal report. With fewer new vehicles being made and sold, consumers are hanging on to the cars they currently have, which has impacted the available inventory and kept used car prices high.

“Dealers are having a hard time maintaining inventory, which is causing some impact on lending,” said Shane London, president and CEO of Deseret First Federal Credit Union in West Valley City, Utah.

Credit union auto lending is feeling the hit, too. Auto loans at federally insured credit unions were up by just 1.2% year-over-year during the third quarter, according to data from the National Credit Union Administration, compared to a 3.5% increase one year prior. While used car loans were up about 4.4% as of Sept. 30 – the same growth rate seen one year prior – new auto lending was down by 3.7%, compared with a 2.1% gain seen at the close of the third quarter of 2019.

The Federal Reserve Bank of St. Louis reported inventory during the fall was down between 30-45% from normal levels.

David Visinksy, director of loan trading at Vining Sparks, said there may be some seasonality at play, but “it will be interesting to see how much lower this ratio goes or if it bounces back in 2021.”

But in some markets, new vehicles sales have ticked up of late, and used vehicles are a little more plentiful through trade-ins.

“We anticipate this effect will continue, and inventory will not be at historically normal levels throughout this year,” said Todd Hall, president and CEO of Winston Salem, N.C.-based Truliant Federal Credit Union.

When used vehicle inventory is low and prices stay high, buyers are more likely to shop for a comparable deal on a new car versus a used one, bringing aggressive captive financing into competition with Truliant’s rates. That helps manufacturers move units, but makes it harder for the credit union to compete, Hall said.

The $3.2 billion-asset credit union had slightly more than $1 billion in auto loans on the books as of Sept. 30, 2020, up slightly from $983 million during the same period in the prior year.

Vincent Hui, managing director at consultant Cornerstone Advisors, suggested auto loan demand for the early months of 2021 will be comparable to the end of 2020.

“On the one hand, rates are low to finance a car purchase when there is some pent-up demand, but there is a lot of uncertainty with the economy, unemployment and the COVID vaccine. We may get an uptick in the second half of the year,” he said.

Auto production should eventually increase and relieve any potential supply pressures, Hui said. Until then, though, credit unions will want to get some higher-yielding assets on their balance sheets to offset their surge in deposits.

The $338.3 million-asset Infinity Federal Credit Union in Westbrook, Maine has an auto portfolio that is heavily tilted toward used vehicle loans. The credit union had nearly $26 million in used auto loans as of Sept. 30, 2020, down from roughly $28 million during the same period in the prior year.

Chief Financial Officer Robert Leger said inventory issues would not have a major impact on its auto lending since its portfolio is heavily weighted toward used auto loans rather than new cars.

“We have not been reliant on dealer-funded loans through indirect channels, so the slowdown in dealer-originated loans will not significantly slow down our originations,” he said. “We expect demand for used auto loans, both purchase and refinance, to be higher in 2021 than prior years as borrowers continue to refinance their loans into lower rates.”

Infinity also expects more borrowers to have confidence in their job stability as the economy starts to recover and unemployment drops.

London said auto lending in December was “great” but it was primarily refinancing existing loans.

“We anticipate OK growth for 2021, but it will be challenging,” he said. “I think the biggest issue facing us this year will simply be the competition with other institutions. The consumer appears to have an interest in buying vehicles but nothing excessive.”

The wide-scale job loss stemming from COVID-19 has also has forced some credit unions to be more conservative in their underwriting.

But London said Deseret First’s Utah markets have some of the lowest unemployment rates in the nation.

“I think those in ‘at risk’ jobs like hospitality, lodging and travel may have their income looked at a bit more closely. However, we just haven’t seen any of that taking place yet,” he said.

Leger said Infinity focuses on the overall relationship with the member including their full history rather than a snapshot of what their present financial circumstances look like.

Maine is a state that is heavily reliant on tourism and hospitality, which practically disappeared for most of last year, Leger said. He expects most of the jobs in those sectors to come back once travel restrictions are lifted.

“But our members can’t put their lives on hold while the economy recovers, so we needed to change the way we help them,” he said. “This made us reconsider how we look at unemployment income.”

Hui said lenders may be more leery of approving loans strictly based on credit scores, but the additional income verification may increase customer friction, and that could negatively impact volumes on the indirect side.

Truliant’s Hall predicted lenders may have stricter requirements for proof of income or employment during the pandemic — especially for those borrowers employed in the industries known to be harder hit by the economic downturn.

Most lenders will require a couple of the most recent pay stubs and may progress to proof of income statements from employers if they have further concern. They may also increase their reliance on third-party employment-verification services, he said.

Editorial The conservation of fish stocks is a common issue