New issue of “Poet of the Million” magazine 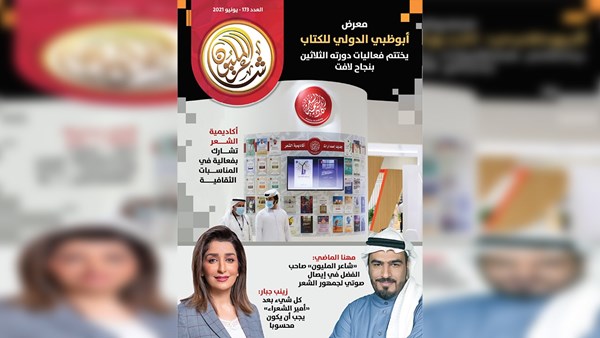 Issued by the Poetry Academy in the Cultural and Heritage Programs and Festivals Management Committee in Abu Dhabi, Issue 173 of the magazine “The Million Poet”, highlighting the most prominent cultural activities and events that the Abu Dhabi International Book Fair witnessed in its thirtieth session, and also celebrating a number of poetic experiences that reached the final episode. From the “Prince of Poets” program in its ninth season.
The cover of the issue, in the middle of it, is a picture of the Poetry Academy’s pavilion, which actively participated in the exhibition and presented a variety of activities and presented a group of new publications that specialized in popular and Arabic literature in general, and received a remarkable turnout from the visitors of the exhibition.
As for the introductory issue, it talked about the success of the exhibition’s activities and about the capital, Abu Dhabi, which, as usual, was able to excel by organizing a successful exhibition by all standards, through comprehensive work and an effective organizational effort. We followed its results during the seven days of the exhibition, which witnessed dozens of events and sessions, with the participation of more than 800 exhibitors from 46 Countries around the world came to Abu Dhabi to share its great cultural wedding. The editorial also touched on many initiatives that were announced, most notably the initiative of His Highness Sheikh Mohamed bin Zayed Al Nahyan, Crown Prince of Abu Dhabi and Deputy Supreme Commander of the Armed Forces, to allocate six million dirhams to purchase a valuable set of books, references and educational materials for the benefit of school libraries in the country. Exempting all exhibitors from paying participation fees for this year. Through this, the capital Abu Dhabi confirms its keenness and support for the cultural movement in general, and to push the wheel of publication, in order to spread awareness in our societies and encourage reading, knowledge and love of knowledge.
In an extensive survey, a number of Arab poets spoke about the ninth season of “The Prince of Poets,” stressing that it gave the opportunity once again to a group of distinguished poets from different countries to present themselves to the audience of Arab poetry. The program has continued its successes season after season, and there is no doubt that it is able to continue indefinitely.
In another survey, the students of the thirteenth academic year at the Poetry Academy praised the great opportunity that the academy gave them during the season to learn about the arts of poetic writing and get closer to the worlds of the poem.
The issue also included a group of poems by poets who participated in the “Prince of Poets” program in its ninth season, and in the section on dialogues, the magazine met with the Bahraini researcher Mubarak Al-Ammari, who spoke about the experience of the poet Ibn Habtoor, and his constant keenness to protect his name from extinction. This is in addition to interviews with a number of stars of Al Raha Beach Theater, including Zainab Jabbar from Iraq, Mr. Khalaf Abu Diwan from Egypt, Muhammad Al-Turki from Saudi Arabia, and the star of “Poet of the Million” in its eighth season, the Syrian poet Muhanna Al-Madi.
The issue also included a distinguished presentation on the life of one of the most important figures of Nabati poetry, Rashid Khamis Juma Al-Habsi, under the title “The Ya’ariba Poet.. A blind man saw life with his heart.” He also recalled the most prominent stations of the eighth season of the “Million’s Poet” programme.
Those interested can view all the issues of the issue via the Academy’s website: www.poetryacadmy.ae