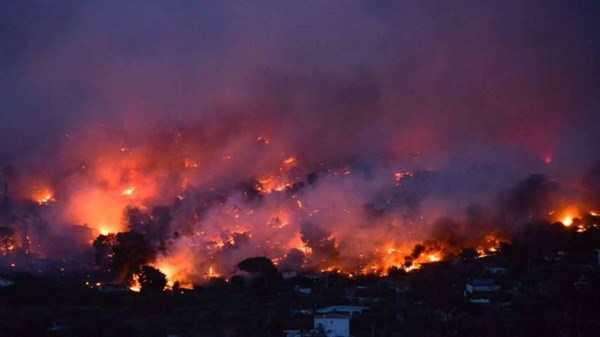 A new fire broke out on Tuesday in a forest at the foot of Mount Barnes, 30 kilometers north of Athens, prompting authorities to close part of the highway linking the Greek capital with the north and south of the country as a precaution.

The Greek Civil Defense has sent messages to the residents of the Barnes town of Varembombe to remain alert. Dozens of children were also evacuated from a nearby summer camp as a precaution, according to some media outlets. The town near Tatouy Palace includes a horse riding center, monasteries and factories.

A total of 104 firefighting personnel, 35 trucks, five helicopters and four launchers were mobilized in Farimbombe, according to Greek firefighters.

Since last week, Greece has been experiencing its worst heat wave in more than 30 years, with temperatures expected to reach 43 degrees Celsius this week in parts of the country.

Several fires broke out in Greece last weekend without causing any casualties, especially in the island of Rhodes and northwest Peloponnese, where the fires destroyed more than three thousand hectares of pine forests and olive groves before they were brought under control on Sunday evening. On the tourist island of Rhodes, fires have been engulfing a forest since Sunday, and firefighters are continuing to tackle them.

María Eugenia Vidal on the management of the pandemic: ‘We do not have concrete answers, nor plans, nor forecasts’

How did the Corona epidemic in Tunisia become more dangerous than India?