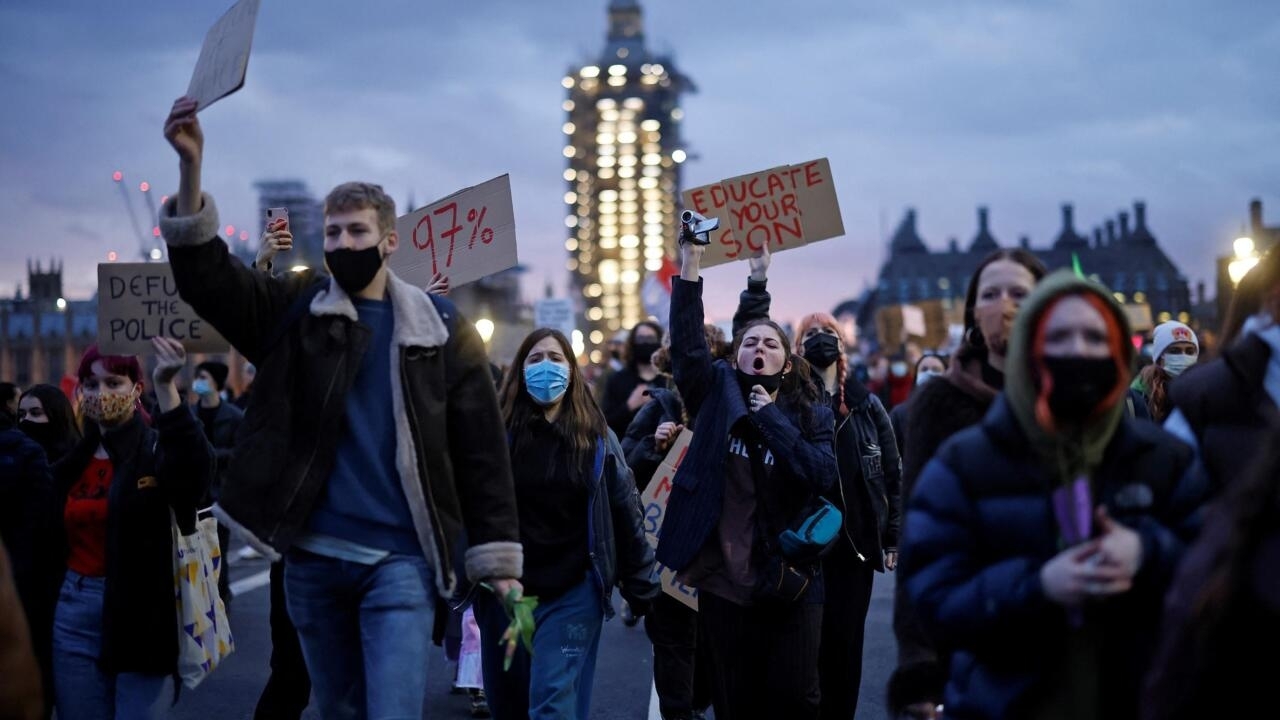 A new demonstration took to the streets of London on Monday to protest the police abuses that occurred on Saturday during a vigil in memory of Sarah Everard, the young woman kidnapped and murdered on March 3. The protesters gathered in front of the headquarters of the police, the Parliament and the office of the prime minister, Boris Johnson, demanding responsibility for the Everard case and the actions of the police officers and in protest against a bill that would give more power to the police to suppress concentrations.

This Monday, thousands of people flooded the streets of London again to protest against the murder of Sarah Everard. This time, protesters gathered in front of the police headquarters, Westminster Parliament and Prime Minister Boris Johnson’s office, calling for accountability following police abuse during a memorial vigil for Sarah Everard on Saturday and against a bill that would give the security forces more power to repress during rallies.

With banners reading “kill the bill,” protesters demanded on Monday that the reform, which will be debated in Parliament this week, not be approved. At the same time, they demanded an end to sexual violence on British streets and respect for women. So far, several detainees have been registered during the night demonstration on Monday.

The anger of the British people was unleashed with the disappearance of a 33-year-old woman, Sara Everard, on March 3, when she was returning home after having dinner at a friend’s house in London. Ten days later, his body was found in a clearing in Kent, in a plastic bag. The only suspect in the murder is a member of Scotland Yard – as the British police force is known – Wayne Couzens, an agent in charge of the protection of diplomats who already had a history of sexual assault.

Following the tragic event, many women decided to gather for a vigil Saturday in memory of Everard. But things did not end well. With a paradoxical tinge, the police officers charged the women who were just asking for an end to the violence against them. A fact that ignited even more the tension of the population, something that the British Executive now tries to control.

“Like everyone who saw it, I was deeply concerned by the footage from Clapham Common on Saturday night,” Johnson said, referring to the South London open space where the vigil was held.

For their part, the security forces justified themselves by claiming that the containment measures against the Covid-19 pandemic do not allow this type of meeting and that the vigil had been declared “illegal.” Through a statement, they also assured that they regretted what happened.

Since the police crackdown on Saturday, many have called for the resignation of Cressida Dick, head of the London Metropolitan Police. However, the prime minister was in his favor.

“I have complete confidence in Cressida Dick, and she herself has asked us to analyze what happened on Saturday night. The police face a very tough task, although there is no doubt that the images we saw are very disturbing, “the president said during a press conference on Monday.

Dick herself expressed her decision to continue leading the city’s security forces and regretted what happened. “I would not have wanted to see a vigil in memory of Sarah end those scenes. (…) In fact, if it had been legal, I would have been there myself,” said the highest authority of the London police.

This Monday, Johnson convened the main security and justice officials of the Anglo-Saxon country, led by the Minister of the Interior, Priti Patel, to try to reinforce security measures for women and girls in the United Kingdom. After the meeting, the British leader assured through social networks that it had been a success.

This evening I met with ministers, senior police officers and @CPSUK to discuss further steps needed to protect women and girls and make sure our streets are safe.

The horrific case of Sarah Everard has unleashed a wave of feeling about women not feeling safe at night.

For her part, Minister Patel assured that this year she will be in charge of putting on the table of Parliament a proposal to increase the safety of women and end episodes of gender violence.

“Too many of us have walked home from school or work and heard footsteps uncomfortably close behind. Too many of us have pretended to be talking on the phone with a friend to push someone away,” Patel said during her appearance before the House of Representatives. the Commons this Monday.

✔️ Ends halfway release of those convicted of offences like rape

Hundreds of people attended the protest before the Westminster Parliament on March 15, which featured excessive police surveillance sweeping the perimeter. There, the women chanted “sisters united will never be defeated” and left flowers in memory of Everard. Given the great surveillance of the area, they also recalled the police violence on Saturday.

“During Saturday’s peaceful protest in Clapham Common, the police decided to brutally break up a peaceful vigil insulting and detaining women, so today’s protest is really important, not just to protest against police behavior, but to protest the broader problem of violence against women and demand that something be done to end it, “said one of the protesters.

The focus is now on the police bill, which will be debated in the House of Commons this week. It would introduce harsher penalties for serious crimes and release some prisoners after serving half their sentences, as well as granting greater powers of action to the police during civil protests.

Motorsport Luka Nurmi, 16, took an overwhelming victory in the Ferrari Challenge in Monza