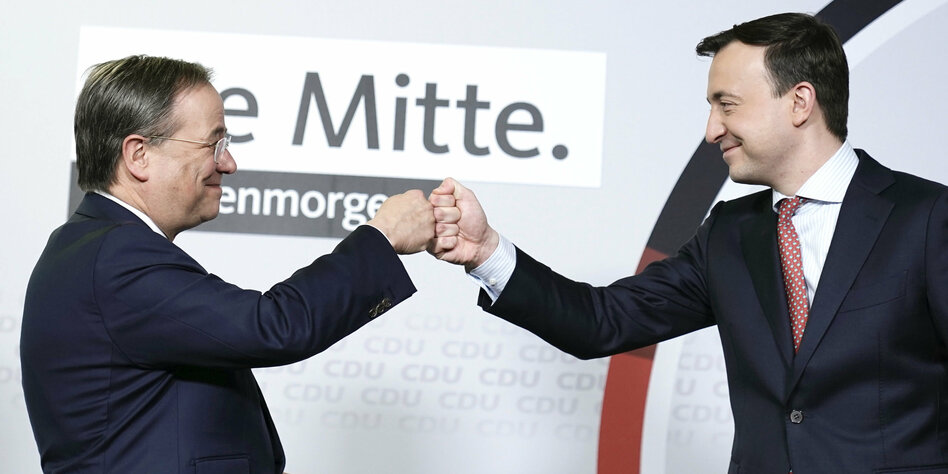 The new CDU chairman is Armin Laschet. The delegates confirmed the result of the online party conference on Saturday by postal vote.

BERLIN dpa | Armin Laschet is the new CDU chairman. After his election at an online party conference last Saturday, the delegates also confirmed him in the subsequent postal vote. According to the CDU, Laschet received 796 of 980 valid votes on Friday. The CDU calculated an approval rate of 83.35 percent. As at the party congress itself, 1,001 delegates were entitled to vote.

After the results were announced, Laschet said that many of those who voted for Merz and Röttgen in the online voting “are now behind the new chairman”. Participation in the postal vote and its result “are a signal of the unity of the Union”, said the Prime Minister of North Rhine-Westphalia.

In the runoff election against Merz at the online party conference, Laschet won on Saturday with 521 to 466 votes. It came to 52.6 percent of the votes cast including abstentions. Merz achieved 47.0 percent.

83.35 percent of the delegates for Laschet

In order to make the “digital preselection” legally secure, the postal vote followed. Laschet, Merz and Röttgen had assured in advance that they wanted to accept the result of the online vote.

In the CDU, it was expected that Laschet’s result in the postal vote would be better than at the party congress. It will probably be important for a number of delegates to send the new chairman into the super election year with a good election result, according to the reasoning.

Merz called on the CDU members last Monday to support the new chairman. “I ask all delegates to take part in the final written vote and to give our new chairman Armin Laschet a strong vote. And then we go to work together, ”he wrote in a letter.

Comedian from “Crooked Mirror” confessed to an affair with a prostitute