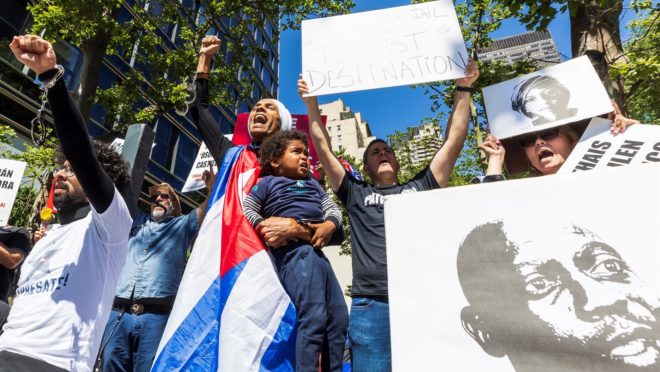 Cuba is experiencing a “climate of violence and repression similar to the so-called Black Spring”, denounced more than 200 artists and intellectuals from Cuba and other countries last month. They compare the recent wave of repression by the Miguel Díaz-Canel regime against artists and opponents to the spring period of 2003, when Fidel Castro carried out a series of arrests of dissidents, including doctors and journalists.

The regime is targeting young people, artists, activists and independent journalists, who are prevented from meeting and expressing themselves freely, and who also face police surveillance and harassment.

Among the recent cases of persecution of Cuban artists is the arrest of rapper Ramón Eusebio López Díaz, known as “El Invasor”. The musician was broadcasting live on his Facebook page on Friday (18), when agents of the National Revolutionary Police of Cuba (PNR) entered his home in Bayamo and arrested him.

López Díaz began the broadcast when police were outside his home. “This happens to all those who fight against the government,” he denounced. The artist told the police that he had not committed any crime and refused to open the door. Just before his arrest, the musician urged his followers to continue their protests and defended freedom of expression. At that moment, the police invaded his residence, handcuffed him and the transmission was ended.

López Díaz announced on Monday via Facebook that he was back at his home. There was no official information on the reasons for the artist’s arrest.

On Wednesday (23), several artists woke up under police surveillance in front of their homes in Havana, reported ADN Cuba. On the same date, the UN voted on the resolution presented by Cuba that calls for the end of the American embargo on the island (read more below).

The tactic of police sieges at the homes of dissidents has been used by the Cuban regime against artists. Luis Manuel Otero Alcântara, artist and opposition activist, suffered police harassment at his home for a month. After starting a hunger strike, he was confined to a hospital for a month, where he reported suffering torture. Amnesty International classifies him as a prisoner of conscience.

On Monday, the regime detained Otero Alcântara once again as he was heading to a virtual meeting to denounce the arrest of several activists who demonstrated their solidarity on the street where he lives in Havana. After spending hours “disappeared”, the artist said on video that the police “kidnapped” him and he went through hours of detention and interrogation.

The NGO Prisoners Defenders claims that the number of political prisoners in Cuba is the highest in 18 years. One report of the organization released on June 1 attests that there are 150 political prisoners and convicts in the country. For the NGO, Cuba has reached “a new Black Spring in 2021”.

According to the May 27 manifesto, with the popularity of the song Patria y Vida, a song recorded by several Cuban artists in February that questions the communist government and denounces the island’s political and economic crisis, the persecution of Otero Alcántara and the Maykel (Osorbo) Castillo Pérez, co-author of the song who was arrested.

“Police sieges, arbitrary arrests, women abused and beaten by police officers and public officials, surveillance cameras installed by government companies in front of activists’ homes, in addition to the cancellation of telephone lines and internet signal, preventing communication and reporting of atrocities of the dictatorship”, lists the manifesto.

Dozens of Cubans gathered on Wednesday in front of the United Nations (UN) headquarters in New York to demand freedom from political prisoners, while the General Assembly voted on the annual resolution against the US embargo on Cuba.

The resolution, which is not binding, was approved with the support of 184 countries and was voted against by the US and Israel, in addition to three abstentions, from Colombia, Ukraine and the United Arab Emirates.

After a year’s break due to the pandemic, Cuba has once again taken to the UN its denunciation of the embargo, which since 1992 has been approved with great support from the international community. In 2019, the last time the request was voted on, the text had the support of 187 of the 193 Member States, but with one vote against more, from Brazil, which has now not commented.

In recent months, the Cuban government has carried out an intense campaign to denounce the embargo, enforced by former US president Donald Trump. The republican government established measures to make economic transactions and the arrival of American tourists even more difficult, and also included the country in the list of sponsors of terrorism. Joe Biden’s government, however, has promised to review these actions, but for now it has made it clear that it does not see the Cuban issue as a priority.

With information from EFE Agency.