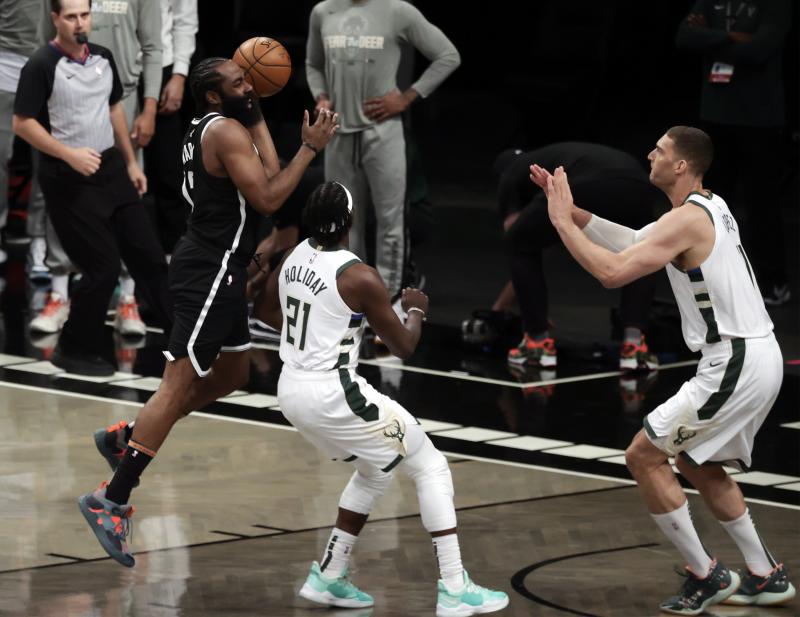 The Brooklyn Nets did not falter after James Harden’s injury in the first minute and defeated the Milwaukee Bucks 115-107 this Saturday, at the start of the Eastern conference semifinals.

In front of their audience, Kevin Durant and Kyrie Irving, the other two Brooklyn superstars, combined to score 54 points and make up for the absence of Harden, who suffered a hamstring problem again whose severity is still unknown. “We tried not to be too emotional out there, but losing one of your leaders like that on the first play of the game, we had to regroup for a couple of minutes and think about what was going to happen,” explained Durant, who praised the companions who assumed a greater role. “The guys came in and they just tried to play really hard. We did not care about anything other than playing and executing the game plan and leaving everything out there, “he acknowledged.

Durant added 29 points and 10 rebounds and Irving 25 points and 8 assists, while Greek leader Giannis Antetokounmpo, the Bucks leader, finished with 34 points and 11 rebounds. “We all had to take a step forward. Unfortunately we have played without him (Harden) most of the season. We have guys who can take that step and then Kevin and Kyrie do their thing, “said veteran Blake Griffin, who completed one of his best performances in Brooklyn with 18 points and 14 rebounds.

The Nets, who beat the Boston Celtics 4-1 comfortably in the first round, saw Harden leave the court when a minute had not elapsed. The guard, who had already been out for five weeks between April and May due to a hamstring problem, broke again in a basket tackle. With 43 seconds played, coach Steve Nash called a timeout and Harden walked on his own feet to the changing rooms of the Barclays Center in Brooklyn (New York).

“It’s disheartening,” Nets coach Steve Nash said. “I do not know if he will play the next game, I have no idea, but it is disheartening that he did not play tonight.” “We were well prepared for this eventuality but you never want to see something like this with a player like James, who is so important and responsible,” he said.

Top scorer of the past three NBA seasons, Harden landed in January with the Nets after he forced a trade from the Houston Rockets claiming he wanted to fight for a championship. The MVP (Most Valuable Player) of 2018 asked to play with Durant and Irving to form a super team that reached the playoffs as a great candidate for the title. In the series against the Celtics, Harden averaged a stratospheric 27.8 points, 3.8 triples, 7.2 rebounds, 10.6 assists and 2 steals.

The Nets held off Antetokounmpo, Khris Middleton (13 points and 13 rebounds) and Jrue Holiday (17 and 9) until they reached the break with a slim lead of 63-61. In the third period, the locals put the direct with a partial of 35-23 taking advantage of the unusual lack of aim of their rival.

The leader on both sides of the court was Kevin Durant, who leaves no sign of the serious Achilles tendon injury that left him blank all last season. The forward, in search of his third ring at 32, was in charge of Antetokounmpo’s defense and appeared in all the decisive moments to decide the victory for his team.

Antetokounmpo, who is eager to reach his first Finals, scored seven straight points to put the Bucks 10 points behind (103-93) in the fourth quarter but Durant quickly snapped the streak. Milwaukee, which swept the Miami Heat 4-0 in the first round, had a terrible night on the pitch with a 20% efficiency on 3s (6/30) and 57.9% on free throws (11/19) . “We had trouble shooting and we didn’t compete as hard defensively,” Giannis diagnosed, trying to calm things down. “We have to continue being us, continue playing together. We’ll be fine”.