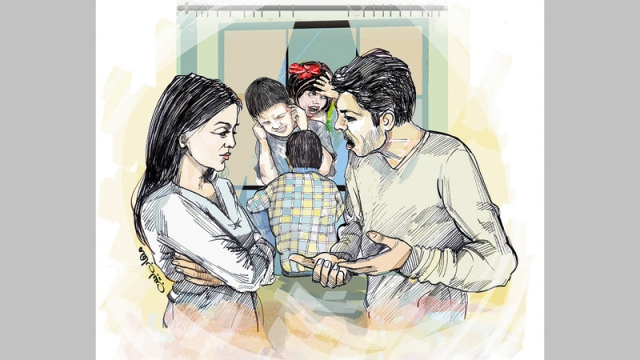 Social workers and legal professionals have warned of family disintegration and its danger to children, explaining that family problems lead to parents being preoccupied with following up on their children, and not implanting good values ​​and traditions in them.

They indicated that the retreat of the family’s role in raising children paves the way for bad friends to control children, as well as increases the area of ​​the role that cyberspace plays in the lives of children and adolescents, and controlling their minds with strange or sometimes abnormal ideas, which leads to an increase in crimes and behavioral violations that it commits. Young children, pointing out that children involved in committing legal violations, often come from broken families, either by divorcing parents or by igniting conflicts between them all the time, and each of them abandoning the care and follow-up of their children, and they added that with the decline of the role of the family in recent years, in exchange for the expansion of space The role that cyberspace plays in the lives of its members, in increasing the rate of crimes and behavioral offenses committed by young people, courtrooms have witnessed an increase in the number of cases involving children and adolescents, and whether they are perpetrators or criminals who are ultimately victims of poor upbringing.

They explained that the family is the mainstay of society and constitutes the first cell in its construction, and through it social values ​​are realized, and it is the first and strongest wall of blocking against psychological and moral problems, by instilling good values, moral virtues, knowledge, habits and good traditions in the souls of its members, especially children, so the children involved descend In committing crimes, in most cases, from broken families, either by divorcing parents or by igniting conflicts between them all the time, and for each of them to abandon the care and follow-up of their children.

In detail, cases pending before the courts, and judicial rulings reported by the Judicial Department in Abu Dhabi, within its publications “Stories and through the Reality of Abu Dhabi Courts” revealed that many children fall into the trap of crime as a result of family neglect, disintegration, or parents’ divorce.

Finally, the Court of Cassation in Abu Dhabi upheld a ruling by the Court of Appeal, requiring parents of minors to pay the father of a boy an amount of 300,000 dirhams, material and moral compensation, after a criminal judgment was issued against the parents condemning minors for violating the child’s honor by coercion, and attacking his privacy by publishing and re-publishing a video clip of the incident. rape.

A quarrel between two children in the second grade, over possession of a pencil, resulted in the injury of a student sitting behind them, as the pen entered his right eye, which led to a severe and direct injury to the right eye, with severe bleeding, and he was transported by ambulance to Hospital, and his operation.

The Abu Dhabi Judicial Department reported a third case. A taxi driver reported that two children under the age of 15 gave him a counterfeit 200 dirham note in exchange for their delivery, so he deducted his 30 dirhams and returned them 170 real dirhams, and the police succeeded in finding the two children and they agreed In front of the investigation authorities, they found a picture of banknotes on a social media site, and for fun, they downloaded them to their devices, then worked on preparing them on a computer, according to the size of the real banknote for each value, and they experimented with printing a 200-dirham note that was good.

On the day of the incident, they wanted to go to one of the malls, and they had no money for that, so one of them suggested using the fake bill of 200 dirhams, and the other favored the idea, and indeed they got into the taxi and used the fake paper to pay the fare, thinking that this was a funny prank. They were referred to the competent authorities to initiate investigations with them.

In another case reported by the Abu Dhabi Judicial Department, a four-year-old (Gulf) girl was subjected to coercive rape by her 15-year-old cousin, while she was staying at their home while her mother was in the hospital for the birth of her brother.

The crime was discovered after the girl’s return to her home and her constant feeling of terror and involuntary urination, refusal to go to sleep in her room, and insistence on sleeping in her parents ’room, which led the father and mother at first to believe that it was caused by her jealousy of her newborn brother, and her fear that he would take possession of their love. However, the extra attention to her did not improve her condition.

The father went to the competent authorities and submitted a report that his daughter had been subjected to forced indecent assault, while the accused admitted before the prosecution that he exploited the presence of his cousin with him at home, indicating that he was addicted to watching pornographic films with his friends and tried to apply what he saw on his cousin, and based on the confessions of the accused decided The Family and Child Prosecutor’s Office was placed in the Juvenile Care Center and referred the case to the Criminal Court, while the child victim was referred for psychological treatment, where the attending physician decided that the victim’s young age and lack of full awareness of the dimensions of the incident will aid in recovery.

In addition, social workers, Rajab Hamed, Fatima Hassan, and Nasma Suleiman emphasized that the disintegration of prisoners is one of the most important reasons for children’s delinquency because there is no oversight of their behavior, as the house plays a major role in creating and shaping correct behavior among children, noting that the school is also represented in Kindergarten and first cycle teachers have an important and complementary role to the family’s role in raising children, and inculcating moral values ​​and good behavior in them.

They explained that the teacher at this stage is considered a second mother for children and can refine their morals, just as teachers play the role of guide and role models in the lives of teenage students, so the societal value of the teacher must always be emphasized so that students can take him as an example for them.

They emphasized that children acquire their behaviors from parenting, as they tend from childhood to imitate what they see in front of them, and if the family is disjointed or does not give enough attention to its children, the child tends to imitate what he watches, whether on television, the Internet or social networking sites, in addition to his resorting to companions Bad teen and trying to gain attention and prove its existence by committing violations and crimes.

For his part, Professor of Culture and Society at the Canadian University in Dubai, Dr. Saif Rashid Al-Jabri, said that the phenomenon of violence and bullying among children has become one of the most disturbing phenomena in society, which prompted psychologists to repeat the warning and warn about this anti-social behavior, which means colliding with customs and traditions. And social laws, with incompatibility with others and describing the perpetrators as a “psychopath” who practices acts against society and its members.

Al-Jabri said: “The most important reason for the increase in the phenomenon of bullying and violence among children and adolescents in society is due to electronic means of communication and websites, which broadcast through imaginary games and serials all forms of violence, as it comes from an environment other than the original environment (the Arab environment), which prompts children to try Tradition », pointing out that these means most of their users are children and young people who spend long hours on the Internet, which causes them to exchange talks with people they may not know, which leads to the fall of many of them into the traps of exploitation and electronic blackmail, and the psychological and social consequences that result from that. Dangerous, in addition to the many methods that constitute bullying.

He added: “The other and important reason for the criminal behavior of some young people in stable countries that have witnessed displacement, such as the countries of the Cooperation Council, are those events of conflicts and wars, which have caused psychological trauma for children coming from these areas, since most of them suffer psychological conditions that do not reach the pathological state. But it remains a worrying phenomenon because it causes a reaction towards society, and it is transmitted to others because the children are the fastest in imitation. ”

Al-Jabri stressed that those responsible for addressing this phenomenon are family, school and society, stressing that the laws and procedures taken in the UAE are among the most ideal systems, and have achieved many positive results that have become an example for others.

For his part, a member of the Emirates Bar Association, Legal Counsel Salem Saeed Al-Haiqi, affirmed that the deviant behavior of children is often due to education and the surrounding environment, especially the virtual reality that most children live at the present time through their use of open space and their constant involvement in violent electronic games, what It may cause children to be affected by it and commit crimes due to lack of family ties and distancing of parents from them.

He said that one of the most important causes affecting children’s behavior is family disintegration, which is one of the most important causes of this behavior due to the lack of control over the child’s behavior, and some foreign cartoon series and social media celebrities who may utter swearing words and words other than Moral, or incitement to violence, directly or indirectly, in messages directed at children because of their young age, and inciting children to commit crimes.

A member of the Emirati Lawyers Association, lawyer Salem Saeed Al-Haiqi, stated that UAE law stipulates that anyone who prepares a juvenile to commit a crime, or performs an act that prepares, facilitates or completes the commission of a crime, or instigates it even if the juvenile does not commit it, shall be punished by imprisonment for a period not exceeding one year. Indeed, the penalty shall be imprisonment for a period of no less than six months if the perpetrator uses coercive or threatening means with the juvenile, or if he is one of his assets or one of those responsible for his upbringing or observation, or if the juvenile is recognized to him according to the law.

Al-Haiki indicated that a juvenile child is someone who did not exceed 18 years of age at the time of committing the act subject to accountability, or his presence in a state of homelessness, indicating that no criminal lawsuit is filed against a delinquent juvenile who did not reach the age of seven full years, however it is permissible for the investigation authorities The courts may, in all cases, order the appropriate educational or remedial measures to be taken in the case of this juvenile if they deem it necessary.

• Specialists: the retreat of the family’s role in contrast to the role that cyberspace plays in children’s lives, which contributes to an increase in crimes and behavioral offenses.