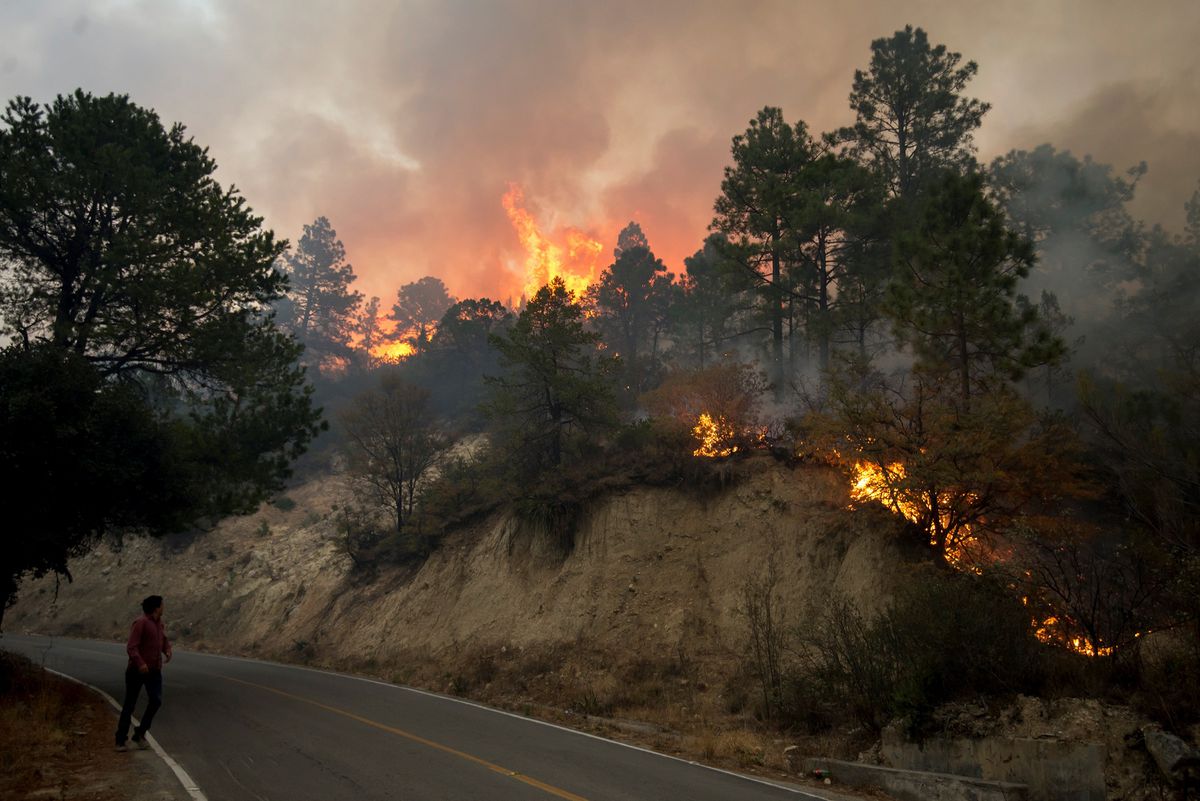 Living in the highlands of the Mixe Region, my initial contacts with bodies of water had little to do with the mighty rivers that spread, navigable, in the sight of the lowland settlers. In the mountains, the water takes the form of springs that drain streams, underground rivers that, suddenly and according to the whims of our rugged geography, appear every day on the surface of the earth and flow towards the sun. From these springs we have always drunk in the highlands. The water also takes the form of seas of thick mist that settle like cotton wool between hills or that cover the towns, penetrating and moistening everything. Around water, Mixe thought has built a series of meanings predictably associated with life.

Springs are amääy / maxän (delicate / sacred) places cared for by a serpent that appears before human sight on special occasions. Each spring is protected by its snake and they are also dangerous lightning rods if the nearby vegetation that protects it is removed. If the spring looks straight at the sky, it can’t help but call the rays. The elders told us over and over again that respect is due to the water, dozens of stories and anecdotes prevented us from fighting in a stream or saying rude words while we splashed in the small bodies of water in the mountains. The images were powerful: the angry water turned their skin into fearsome “mat” snakes with interwoven and rough skin that attacked the person who had offended the water, entangled them until they took them to the depths where they disappeared forever.

Among the Mesoamerican peoples, the stories about water show a complex relationship with this vital element. The different and varied rain request ceremonies show other views on the water cycle and its use. José Ángel Rivas is a defender of forests in the Sierra Tarahumara, he belongs to the O’dam people also known as Tepehuano people in the north of the country. In the first episode of the short documentary series called The topic which deals with water, Ángel specifies that for the o’dam, a living being inhabits the forests that is in charge of drawing the rain, of drawing water that they name as “the blood of the earth. In addition to Ángel, there are many defenders of forests, water and the environment in the country, a good part of them belong to indigenous peoples. The defense of the forest and the water is framed, as Ángel expresses it, in a network of meanings that on many occasions has been pointed out as magical thought, religious thought that has no greater value than that of an anthropological curiosity.

While, on one side, we have a diversity of conceptions of water that have been branded as magical and useless thinking to the ideals of progress and Western development, on the other side we find the idea that water is a commodity, this despite that no one, person or company, manufactures water. Water is a common good. Fresh water, necessary for human life, is created within a complex cycle in which the sea, sky and forests intervene to name just a few elements. The cycle that allows the existence of water does not belong to anyone. In this sense, does it not seem deeply irrational to convert water that has not been manufactured by anyone into merchandise?

If we use “magical thinking” in a derogatory sense as has been commonly done referring to the meanings that other cultures have given to water, could we say that, in any case, magical thinking is turning water into a product for sale? Isn’t that conversion an act of barbarism? While water bottling companies extract the common good that is water and put it in PET containers to generate economic profits, entire towns suffer from the lack of access to this fundamental human right. While water is concessioned to the service of capitalist economic growth, the most vulnerable and poor population is exposed to the shortage of a liquid that is fundamental for our existence. On the other hand, the danger of extracting gas from the subsoil by means of the technique known as fracking or hydraulic fracture has not been conjured yet in Mexico, if carried out, each well will need between 9 and 29 million liters of water to produce a fossil fuel whose use increases the climatic emergency that, in turn, causes water stress. What ideas are most irrational and harmful to human existence?

In front of an official of the National Water Commission, on one occasion, we tried to explain the cultural meanings of water for the Mixe culture and the response was overwhelming: “here we come to hear proposals for solutions within the framework of the law.” The current National Water Law shows several problems and allows excessive concessions to be granted to companies that waste water; Despite the fact that there is a citizen proposal that favors a vision of human rights, unfortunately, the years have passed and this law has not been approved. Many times from indigenous peoples, struggles and languages ​​we have to “translate” our desires, concepts and categories into a language of “rights” because, otherwise, we run the risk of being discredited for considering these ideas as “magical thinking” or folkloric detail. So we choose to adapt to make it understandable to them: we say “human right to water” because otherwise our codes and systems of thought cannot even be taken seriously. In the defense of common goods, including water, in addition to explaining that it is the “blood of the earth”, we have to transfer the importance that this has for our peoples to the language of positive law. However, it is our language, It is these other worldviews that can avert the disaster that the climate emergency predicts in the very near future; It is these highly discriminated ideas that can allow us to hear how the planet is screaming at us that the mechanic that turns natural assets into private property provides a dystopian future. Let us therefore speak in positive law without forgetting that when the water rages it creates a whirlpool of petate snakes that can lead us to the abyss.

CSKA suffered its first defeat under the new coach Olice

The electoral program of the PSOE in the elections in Madrid: lists, candidacies and proposals