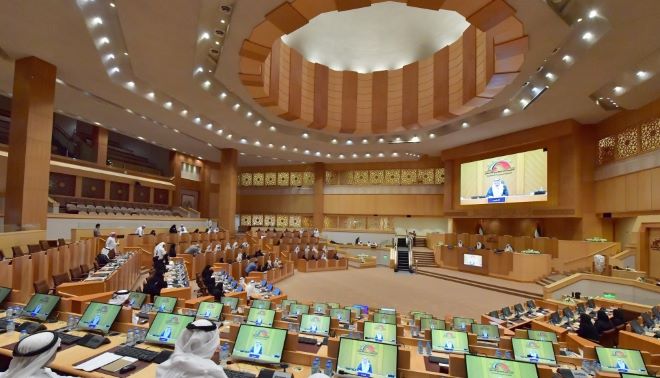 The Federal National Council introduced four new recommendations, including it in its final list of recommendations, on the topic of “family cohesion and its role in achieving sustainable social development goals”, bringing the total to 19 recommendations that were directed to the government, last Tuesday, to take the necessary action in this regard.

In detail, the Federal National Council directed to the Council of Ministers parliamentary recommendations adopted by the members of the Council, on the topic of “family cohesion and its role in achieving sustainable social development goals”, after the Council’s Social Affairs, Labor, Population and Human Resources Committee finished reformulating them based on the discussions and proposals of Council members. , and hear the views of government representatives.

The list included the recommendations sent to the government, a copy of which was obtained by Emirates Today, nine recommendations in the “legislation” axis, the first of which is the preparation of a draft general family law aimed at supporting the community security system by preserving the family entity and strengthening the cohesion of its members in line with the national identity UAE and global developments and changes, and the second, setting regulations that legalize the appearance of children in social media programs to protect and rehabilitate them and impose penalties on families that abuse their children by exploiting them, especially with regard to business and publishing videos offensive to children to investigate spread to ensure the protection of children’s rights from all sides in accordance with the provisions of the provisions Federal Law No. Three of 2016 on the Rights of the Child (Wadima), in addition to reconsidering Cabinet Resolution No. Three of 2015 regarding non-governmental family counseling centers regarding the requirements for granting licenses to family counseling centers, in order to ensure the capacity, efficiency and quality of the work of these centers.

The recommendations in this axis also included the amendment of Article Seven of Federal Law No. two of 2001 and its amendments regarding social security to continue disbursing social assistance to unemployed children until one of the sons obtains a job or the girl gets married, coordinating with the General Authority for Pensions and Social Security to reconsider the law Federal No. 7 of 1999 for Pensions and Social Security and its amendments regarding the provision of early retirement for the employed mother for those who wish to do so and not linking retirement to age, coordination with the concerned authorities in (increasing the amount of the children’s allowance to encourage citizens to have children, disbursing the amount of the children’s allowance to newborns to retirees), and also, Activating Cabinet Resolution No. 19 of 2006 regarding the establishment of nurseries at the headquarters of ministries, authorities, public institutions, government departments and bureaus to provide care for the children of female employees working in those entities.

The Council also recommended, in the legislative axis, “coordination with the Federal Authority for Governmental Human Resources regarding the amendment of some articles of Federal Decree-Law No. 11 of 2008 regarding human resources in the federal government and its amendments by Federal Decree-Law No. Nine of 2011 and Federal Decree-Law No. 17 of 2017 represented in ( Article 53 regarding maternity leave, so that the period of maternity leave and breastfeeding hours are increased to raise the fertility rates in the country, and activate Article 54 regarding paternity leave, so that an employee who has a live child is granted paid leave for three working days during the first month of the birth of his child, Coordination with the concerned authorities regarding the introduction of the work system under the joint job system for working mothers who wish to do so through the participation of employees in one job, and the tax and working hours are divided equally between them).

The recommendations included a review of Federal Law No. 9 of 1976 regarding juveniles, delinquents and the homeless, and the development of practical work programs in coordination with family, educational and security institutions on raising awareness and immunizing children against negative behaviors to prevent them from entering juvenile care centers, coordinating with the concerned authorities about finding alternatives regarding The possibility of achieving flexibility in the nature and working hours of working women, especially the category of mothers.

In the “Family Counseling” axis, the Council recommended the preparation of memoranda of understanding between the Ministry of Community Development and the institutions concerned with family guidance and the Ministry of Justice, under which cooperation and coordination would take place to find a mechanism of action that enhances their role in solving family problems and conflicts, by receiving family complaints in a preliminary manner by institutions related to affairs. family, and trying to treat it from a social and psychological point of view before referring it to the family guidance committees in the courts.

The Council also recommended, in the “Children’s Custody” axis, the establishment of programs concerned with coordination between the ministry and other federal and local concerned authorities to find solutions to the problems of custody and their consequences in accordance with the interests of the children, while it recommended, in the axis “Activating the role of the social risks observatory”, to activate the role of the observatory. Social risks and linking it at the state level to monitor and evaluate extraneous phenomena on the individual, family and society from several specialized perspectives such as (the social, psychological, legal, legislative and economic fields, adding any other related disciplines and addressing them), in addition to establishing a central database to collect data and information related to various family issues .

With regard to the “Juvenile Protection” axis, the Council recommended providing the appropriate number of social and psychological workers in coordination with higher education institutions and the Ministry of Health and Community Protection, and in the “Children’s Shelter and Care Centers” axis, it recommended the development of the Sheikh Khalifa Social Welfare Center in the Emirate of Umm Al Quwain to accommodate and care for children Securing their rights and providing them with services, protection programs, and the necessary consultations to qualify them to integrate into society.

The parliamentary recommendations adopted by the Council in the axis of “creating awareness programs and initiatives” included the design of awareness and educational programs, initiatives, and specialized work programs targeting (young men and women who are about to get married to prepare them to assume marital responsibilities and awareness of the importance of compatibility with the other party and emphasizing the necessity of these programs, training And rehabilitation to face the various variables and challenges faced by some Emirati families, with the intensification of the use of social communication programs and technological methods, in order to achieve the foundations of compatibility between spouses and skills to deal with family disputes.
The recommendations also included activating the system of babysitters to ensure achieving the highest levels of care and safety for the child and not affecting his Emirati national identity, providing a comprehensive psychological family counseling test through coordination between the concerned institutions before submitting the case to the family guidance committees, providing social intervention services programs for families after divorce. To support divorced people and help them overcome the psychological and social crisis and rebuild family ties, motivate economic and tourism institutions to provide facilities and discounts that ease the burdens of marriage on those who are coming to it.

The last axis of the recommendations of the Federal National Council on the subject of “family cohesion”, which is called “encouraging people of determination to marry”, included three recommendations, which included “the development of an integrated program for the prevention of genetic diseases in coordination with the concerned authorities in order to avoid genetic diseases by conducting the necessary genetic tests before Marriage, preparing training and educational programs for people of determination who are about to marry each other and for people who are about to marry them, allocating places prepared for the courses in proportion to their nature and needs, coordinating with the authorities concerned with housing programs regarding (exempting people of determination from paying housing loans, and allocating a percentage of housing projects The future of people of determination and preparing them in proportion to the nature of the disability, reconsidering the completed and handed housing projects, and carrying out their maintenance in proportion to the nature of the disability.”