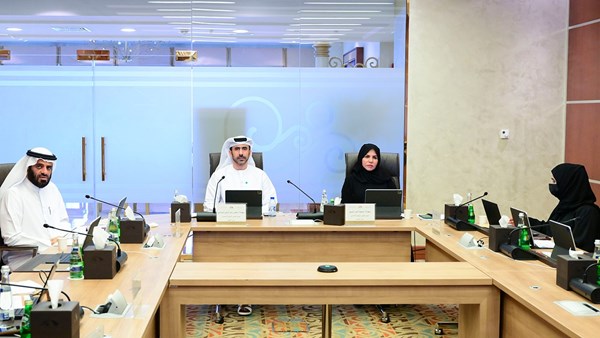 During its meeting at the headquarters of the General Secretariat of the Council in Dubai, the Islamic Affairs, Endowments and Public Utilities Committee of the Federal National Council continued to discuss a draft federal law regarding the organization of the Owners Union, headed by Khalfan Rashid Al Nayli Al Shamsi, Chairman of the Committee, and with the participation of representatives of the Ministry of Energy and Infrastructure and the Union of Owners of Al-Raqeeb neighborhood.
The meeting was attended by members of the committee: Jamila Ahmed Al-Muhairi, the committee’s rapporteur, Hamad Ahmed Al-Rahoumi, First Deputy Chairman of the Council, Suhail Nakhira Al-Afari, Sabreen Hassan Al-Yamahi, Kifah Muhammad Al-Zaabi, and Naameh Abdul Rahman Al-Mansouri.
Khalfan Rashid al-Nayli al-Shamsi, head of the committee, said that the committee followed up the discussion of the draft law, which consists of 40 articles, in the presence of representatives of the Ministry of Energy and Infrastructure, and representatives of the Union of Owners of Al-Raqeeb Neighborhood who presented their experience, observations and proposals in this regard, and views were exchanged on the challenges facing them and ways. solve it.
He added that the committee reviewed during the meeting the materials it had created and the amendments it had made to the draft law, which were discussed with representatives of the Ministry of Energy and Infrastructure, where views were exchanged on those amendments and the efforts of the ministry in overcoming the obstacles and challenges facing the Owners Union were exchanged.

32,377 beneficiaries from the social support of "Zayed for Islamic Culture"

Koeman: «We try to do our best so that Messi stays»