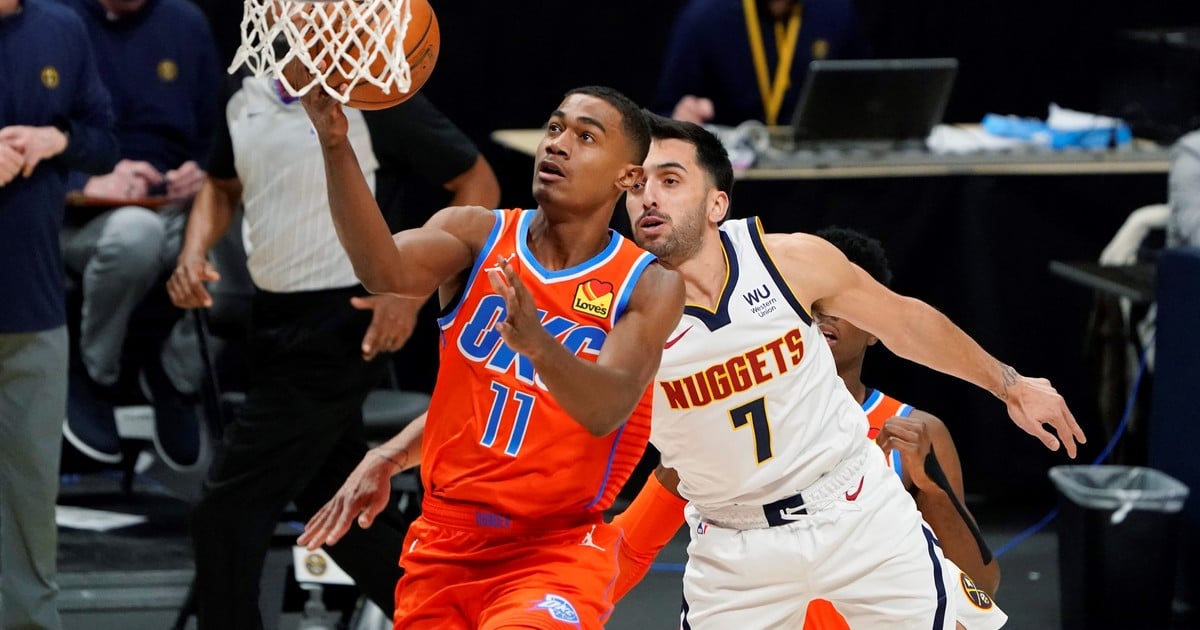 Great triumph for the Denver Nuggets of Facundo Campazzo on another NBA night. The Colorado cast beat the Oklahoma City Thunder 119-101 in a function in which the Argentine had very remarkable moments. Although he only scored three points and was not very accurate facing the rim (1/6 from the field), he flared up during some sections of the match and showed sparks of pure talent. He finished with a spectacular assist and a steal in his personal stat in 18 minutes of action. Among the negative, he recorded a loss and two personal fouls.

Overall, it was a simple duel for Denver. He had an obligation and a need to win before going on tour and he managed to do it without much difficulty. As always, the Serbian Nikola Jokic was the great figure with 27 points and 12 rebounds. The rest of the points were shared between several teammates, with six more men reaching double digits. Jamal Murray’s physical annoyance was noticeable, as the talented 23-year-old point guard scored just five goals – with him healthy, the difference would have been huge.

This time the Cordovan had to play more than usual (his average is 13.2 minutes per game) and it was part of the key moment of the game in which the Nuggets cut themselves on the scoreboard.

When he entered he contributed all of his personal statistics, with a steal, a magnificent assist from behind between the legs and a triple. Then he devoted himself to playing and making play, showing that he feels more comfortable in games with long possessions, rather than with direct attacks that depend purely on individualities.

Among the curious and funny details, Campazzo almost took Isaiah Hartenstein’s head with a ball that just passed him by the side. The cameras caught the moment and the Twitter account of the group led by Michael Malone reproduced it adding “that was close.” Luckily the pass was good and his partner managed to assist another man from Denver.

The next meeting for the former Peñarol and Real Madrid will be this Saturday from 00.00 (Friday night), in what will be the beginning of a five-game tour, in which he will meet Phoenix, Dallas, Miami and San Antonio, the home of his compatriot and faithful follower Manu Ginobili. He will start against the Suns in Arizona. They were ninth in the table, with seven games won and seven lost.

The other party of the date

Donovan Mitchell was key in the Jazz. Photo: AP.

In addition to the victory of the Nuggets, there was another game played this Tuesday in the NBA. The Utah Jazz, with another league Spiderman, Donovan Mitchell, beat a weak New Orleans 118-102.

The Salt Lake City team appears as a candidate, being second in the West behind the Lakers. It was their sixth win in a row and they will go for more when they host the Warriors. With five home games ahead, the outlook is promising and they dream of stealing leadership from LeBron and company.

Mitchell at 28 was the best of the night. Frenchman Rudy Gobert stood out for his rebounding work, finishing with 18 catches, in addition to 13 goals. In the visit, Zion Williamson, 1st of the 2019 Draft, showed off, who perhaps should change of scene to find a team in which his work is better valued and has the possibility of fighting things. If not, he will continue without standing out despite his good numbers due to the insignificance of the Pelicans.