NBA: Campazzo started, left some pearls and Denver’s successful streak does not stop 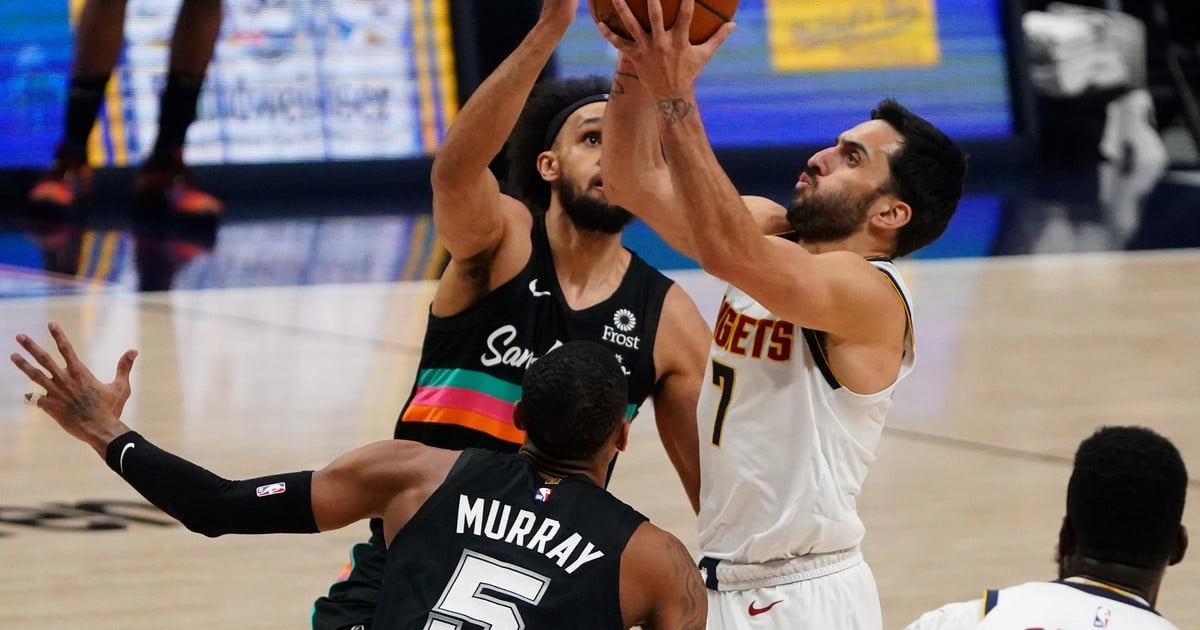 The San Antonio Spurs resisted for a long time but ultimately succumbed against the Denver Nuggets in a game in which the runs, opposed to each other, were maintained. And Facundo Campazzo, headline for the second time in the NBA, he made a good contribution in his team’s 106-96, that keeps climbing positions.

Campazzo earned a place in the starting quintet after the absence of one of the figures, the immovable point guard Jamal Murray, who suffers from discomfort in his right knee.

It was the second time that he had to lead the quintet after his debut in that role, which had occurred February 16 against Boston. This time it was extremely special: the first since the partial entry of the public was enabled, with his wife, Consuelo, and their baby, Sara, on the platform.

DT Michael Malone chose to send it to the group that came out from the beginning to the detriment of Mount morris, who would be expected to start on a similar occasion but this time was relegated to start on the bench.

Although the Argentine, despite being a starting piece, had very little participation and did not unbalance until well into the game.

Before that, there was a San Antonio that fought the game, true to its style of not getting carried away even if it had arrived at the Denver Ball Arena with a negative streak of 2 wins and 8 losses in the last 10 meetings.

Thus, against some Nuggets that seemed to suffer from that lack of rhythm with Campazzo on the move, Gregg Popovich’s men managed to get ahead on the scoreboard in a framework of great parity.

Without much flight, with the triples “denting the rim” and even with coach Malone expelled for complaining about arbitration, but at least underpinned by the men of the second unit, the premises remained in play and went to the break in advantage (54-50).

And from the third quarter the best of Campazzo appeared. His first triple involved a good team play with Nikola Jokic as a passer and a curtain and distraction from Facu with Aaron Gordon, reinforcement of the franchise on the closing of the transfer period.

That annotation served to be three points (65-68) 5 and a half minutes after the end of that period.

Good contribution from Cordoba in the victory of the Nuggets

Already in the last quarter, when the team had made an interesting difference, the Cordovan gave away the pearl of the night, a chopped pass almost backwards that nobody saw, after a twist that fooled everyone and ended in a dunk of JaMychal Green.

His other goal pass also ended with a hammer blow to the hoop, in this case the work of JaVale McGee, the other player who reinforced the Nuggets.

And he closed the job five minutes from the end of the game with a transitional triple that completely settled the lawsuit by serving almost 20 (100-81).

The Nuggets, who won 8 of their last 10 and they have 7 wins in a row, they climbed to the fourth position in the West, beating none other than the Los Angeles Lakers by a victory and being half a game away from the Los Angeles Clippers.

Nothing less than a detail considering that of the room located up locality is guaranteed in the first round of the playoffs, an instance in which today Facundo’s team would be facing to the defending champions, LeBron James’ own Lakers.

Campazzo and Denver will meet again with the Spurs, again at home, this Friday at 22 from Argentina.