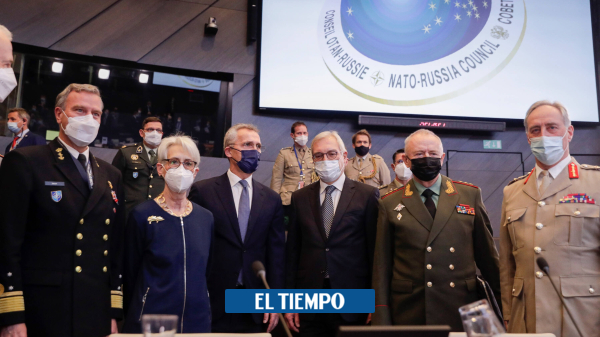 nato Y Russia maintain “significant differences” on security standards in Europe, admitted this Wednesday the secretary general of the military alliance, Jens stoltenberg, who assured that the block is open to new consultations.

(Read here: President of Ukraine calls for a summit to ‘end the conflict’ in his country)

(Also: NATO warns that the risk of conflict between Russia and Ukraine is ‘real’)

The United States and the members of the North Atlantic Treaty Organization (NATO) began a round of talks with Russia on Wednesday in Brussels, seeking ways to deactivate the crisis in Ukraine.

Cooperation between NATO and Russia, which had been frozen since 2014, broke down last October when NATO expelled eight Russian diplomats from its facilities, and in response Moscow decided to close its representative office before the military alliance. Faced with the crisis in Ukraine, the parties agreed to reactivate this Council.

At this meeting Russia is represented by the Deputy Minister of Foreign Affairs Alexander Grushko, who called the meeting the “moment of truth” in relations between Russia and NATO.

The US Undersecretary of State, Wendy sherman, informed NATO allies on Tuesday about talks he held in Geneva on Monday with Russian Deputy Foreign Minister Sergei Riabkov.

“There is no reason to be optimistic, but the Russians are seriously involved in the diplomatic sequence,” the representative of a European country told AFP.

The talks held by Sherman and Riabkov in Geneva were inconclusive, as for now Russians and Americans have remained firm in their respective positions.

(It may interest you: the US spoke with Russia and issues a warning about Ukraine)

Russia, for example, demanded from the United States and its allies a concrete guarantee that Ukraine will not join NATO. For their part, the Americans have not made concessions, but have made proposals to reduce the risks of conflict and initiate conventional and nuclear disarmament, explained the new US ambassador to NATO, Julianne Smith.

In that scenario, Washington would have assured Moscow that it has no intention of placing offensive weapons in Ukraine, but denied any intention to carry out a demilitarization in Europe, said a European diplomat.

“It is too early to say whether or not the Russians are serious on the diplomatic path, or if they are ready to negotiate seriously,” said Jen Psaki, a White House spokeswoman. “NATO’s relationship with Ukraine is an issue that only concerns Ukraine and the 30 NATO allies, and not other countries,” he added.

Sherman on Tuesday sought to allay Europeans’ resentment for staying on the sidelines of the talks so far. The official assured that nothing in terms of security in Europe would be done without the Europeans, stressed the consulted European diplomat.

“The United States is determined to work closely with its allies and partners to encourage de-escalation and respond to the security crisis caused by Russia,” Sherman said in a tweet.

However, the NATO-Russia Council runs the risk of being a repeat of the Geneva discussions, with each side maintaining its positions.

I briefed the North Atlantic Council on yesterday’s discussions with Russia at the Strategic Stability Dialogue in Geneva. The United States is committed to working in lockstep with our Allies and partners to urge de-escalation and respond to the security crisis caused by Russia. pic.twitter.com/RKKIJ1IUbE

“Our expectations are quite realistic and we hope it will be a serious and deep conversation,” said Grushko, who said that Russia will demand a comprehensive response from the alliance to their demands. “We will press for a concrete, substantive reaction, article by article, to the draft of the Russian safeguards agreement,” he said.

See also  In Japan, they came up with a vaccine against coronavirus with a lifetime effectiveness

(In other news: David Sassoli, President of the European Parliament, died at 65)

Sherman, meanwhile, noted that Russia did not make any appeasement gesture, nor did it offer evidence that it will not invade Ukraine, nor did it explain why it deployed some 100,000 troops to the border with Ukraine.

For a senior European diplomat, “we must be extremely cautious. We have no reason to believe that a process is going to start. We are not even negotiating.” “Ukraine has shown great restraint and allies [de la Otán] they must avoid any pretext to close the diplomatic sequence, “he added.

A meeting of the Organization for Security and Cooperation in Europe (OSCE) is scheduled for Thursday in Vienna.

France, for its part, said Tuesday that a meeting of the so-called Normandy Quartet (made up of France, Germany, Russia and Ukraine) will meet “at the end of January.”

In an article published the day before on his blog, the head of EU diplomacy, Josep Borrell, pointed out that Russia was seeking “to disconnect the United States and Europe” and considered that such a goal was “clearly unacceptable.”

Russia claims the right to carry out maneuvers on the border

Russia will continue to carry out military exercises on its territory, including the border with Ukraine, the Kremlin declared on Wednesday, decoupling the maneuvers from the security negotiations that are being held these days with the United States and NATO.

“There is no relationship between these things. We are talking about our units, our military districts and our territory,” said Dmitri Peskov, a Kremlin spokesman, at his daily telephone press conference.

The day before Russia announced new firing exercises in four regions, three of them bordering Ukraine, with the participation of almost 3,000 soldiers.

As reported on Wednesday by the Western Military District of the Russian Army, the exercises will take place in the Belgorod, Bryansk, Voronezh regions, which border the neighboring country, and Smolensk.

Peskov affirmed that Russia’s military exercises “have been carried out, are being carried out and will continue to be carried out” because it is “a habitual practice of the Armed Forces of any country.”

In turn, Russian Deputy Foreign Minister Sergei Riabkov denied this week that such maneuvers represent an “escalation” in relation to Ukraine. “We have no plan, no intention to attack Ukraine, and there cannot be,” the Russian negotiator said in the security talks with the US.

– The nun who disappeared 40 years ago and does not leave the Belgians alone
– Boris Johnson, faced with a new scandal for a party during confinement

Utopia, the movie: it ranks among the most viewed tapes on Netflix

The Ministry of Health: We provided 44,389 doses of the Corona vaccine during the past 24 hours