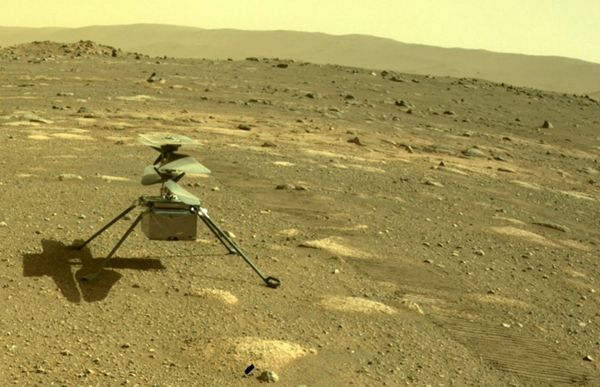 The US Space Agency (NASA) has postponed once again the first flight of the “Ingenuity” small helicopter on the Red Planet as it seeks to fix technical problems with it.
NASA said that the date of the first flight of Ingenuity – which reached Mars aboard the Perseverance probe – was rescheduled to Monday at 0430 GMT. But there is always the possibility that it will be put off again.
The previous scheduled date for the flight of the small helicopter was Sunday, April 11, and the date was changed to be the 14th of the same month.
NASA said the high-speed rotation test of the “Ingenuity” helicopter, which took place on April 9, ended early when problems arose during the transition from pre-flight to flight mode.
Since then, the miniature helicopter has successfully completed a rapid rotation test, the space agency said. The test flight will see the helicopter, which weighs about 1.8 kilograms, attempt to fly at a height of about 3 meters, stay in one place for about 30 seconds, and then return to the surface of Mars.

This will be the first flight by a plane to the surface of another planet. The helicopter is powered by lithium batteries and has the capacity to make several other flight attempts for about a month.
The helicopter faces extreme conditions on Mars: temperatures reach minus 90 degrees Celsius
Low attractiveness and thin atmosphere.

Ignuity traveled to Mars aboard the Perseverance probe, which weighs about 1,000 kilograms and is the size of a small car. The probe reached the Red Planet last February after a 203-day journey. It landed in a dry, 45-km-long lake called Jezero Crater, which will be examined over the next two years.