Nairo Quintana, seen by his DT: “We always thought he was going to respond” 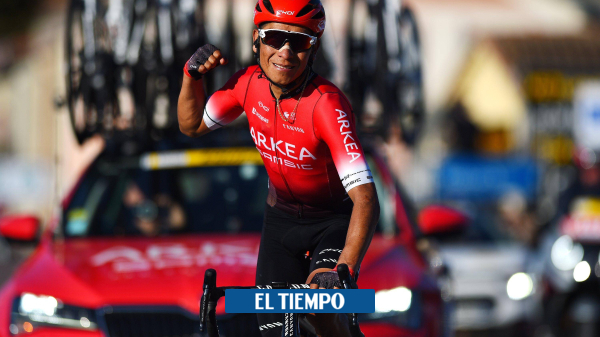 Nairo Quintana had a dark 2021. He tried to get his head out, but couldn’t. Sunk in his hard moments after the operation on his knees, the cyclist from Boyacá did not meet his goals and closed a bitter season with only two wins: a stage and the general of the Vuelta a Asturias.

By 2022 he worked quietly. He knew that there is revenge in the long game and he did not despair. He won the race against covid-19, after testing positive in January, he returned to riding a bicycle and traveled to Europe, quietly, without the hype of other years.

After two races, the numbers couldn’t be better: two stage wins and the same number of titles, at the Tour de Provence and the Tour des Alpes-Maritimestwo competitions that were no strangers to his triumphs: he repeated what he did in 2020.

At this point in the season, Quintana escorts Fabio Jakobsen in the ranking of cyclists with the most wins, four for the Colombian to five for the Dutch packer, but Nairo’s accurate shots have helped the country’s cycling to be the most successful in 2022 , since it has 14 wins to 13 for Belgium.

Today, alongside his compatriots Daniel Martínez (Ineos) and Juan Sebastián Molano (UAE Emirates), Nairo will face another challenge: Paris-Nice, one of the few World Tour stage competitions that he has not been able to win. The 32-year-old cyclist from Boyacá arrives with wings, after his victories, those that make ordinary Colombians proud, seeing him fight for the general classifications of the big ones.

EL TIEMPO spoke with Yvon Ledanois, the sports director of the Arkea-Samic team, who warns that they are also excited, like all of Colombia, to see Nairo Quintana overcome the 22 titles he has already won in his career.

(You may be interested in: Paris-Nice: these are the Colombian cyclists who will be in the race)

Hand in hand with Ledanois

Is it a new Nairo Quintana?
It’s a new Nairo, but it’s the same one from 2020. I think we’re close to seeing a big Quintana. I see a cyclist motivated to do a good qualifying in Paris-Nice, which is the first big goal of the year for him and for us. I think we will see him on the podium or very close to it. We are not going to stop trying to win the race.

See also  The fear of Pogba: risks returning in 2023

What are the key points of the corridor?
It is a very important year for him, for us also because of the issue of classification, because of the Word Tour license. All the races of the year are key, but we are going for Paris-Nice. The points are the points, and Nairo fits very well in this story.

2021 for Nairo was not the best, was there concern in the team?
There were problems, allergies, falls, it was a difficult year, but a champion is a champion, and the proof is Nairo’s level. He’s the running back we always thought he was going to answer and he is.

Is the tour right for you?
The next challenge is Paris-Nice. It is a route that he likes, because it has hard windy stages at the beginning and the mountain comes at the end, and that is where he will have to make the difference. We look stage by stage. The year has started well, but we need to look ahead to have an exceptional year.

What will be the big goal?
There are a lot of dangerous racers. There are teams that come with one or two leaders, it’s a high level, but with the Nairo we have we can see, you never know; if we are not in the top five it will be a disappointment, but I have confidence in him.

How was this strong attack planned to win the Alpes-Maritimes?
We were not surprised by what Nairo did. In the previous stage we lost the day because there were changes and it was less favorable. In the fraction we thought that if we reached the top with 18 s of advantage, the race was played and that is why the plan was to attack. We knew we were very strong. The next day it was very easy to go into that prize and end up with the technical descent. It is his training ground, he knew her and that was all the success.

See also  Milan-De Ketelaere, a few million dance. But if it doesn't close, Plan B is ready
Photo:

Why didn’t they go to the Giro d’Italia?
It was a collective decision, of the managers and sports directors, because of the points issue. That’s it. We look at the end of the year if it served us or not. You never know, but there was a moment to make the determination and that is what was done.

But the Giro had a better route for Nairo…
The profile of a career is never reality, from what you see. You can see it more favorable for him and it is not. In the Tour there is pavé in the first week and Nairo likes it, he has done well. I hope to see a Nairo with a strong team to fight for the objectives. In the Tour there are climbers who will not have a strong group of companions by their side.

Look at Egan Bernal, he was another favorite and we already know what happened. With Nairo we are going to fight for the general and to win stages, it is possible to do both.

Do you think you can fight for the general of the Tour, as Quintana said?
Last year was different because of the fall, the operation, and the preparation was not the best. But this year we have no problem. We can go for the general. It is clear that to speak at this point, because it is not known. The Tour is more favorable for Tadej Pogacar and Primoz Roglic, but nothing is written. Look at Egan Bernal, he was another favorite and we already know what happened. With Nairo we are going to fight for the general and to win stages, it is possible to do both.

Can you beat the Slovenians?
At the moment we have something positive in the team, the confidence that the wins have given us. We have several goals in the classics in Belgium, then in the Tour of Catalonia, with Nairo himself. The results go up and down, and we are comfortable with the points issue and what we do is enjoy this moment. They are good runners, but you don’t know what will happen.

And in the Tour of Spain?
Is different. It is a goal, but it is far away. We are in the first months of the year, we are going step by step, then we will analyze what will happen in the Vuelta. For now, we see until the Tour.

Nairo’s contract ends this year, has there been talk of renewal?
I think this is not the time to talk about the contract, it is time to talk about winning. This topic will be discussed later and the manager of the squad will do it, but it is the beginning of the season and there will be time for that.

Apparently, is there Nairo for more time?
You never know. They look at Alejandro Valverde and I think that ultimately the rider’s motivation is key. There are 27-year-old cyclists who have already lost that motivation, but there are others over 40 who think differently.

How do you see that Arkea 2023 theme on the World Tour?
It is better that they talk about it with the manager of the squad, because I cannot refer to that. Me, I do my job, which is to drive on the road, try to win. The most important thing now is to finish among the 18 best teams, that’s my job.

Live matches on TV for this Sunday, March 6