Nahyan bin Mubarak: Sheikh Zayed invested in the sons of the Emirates 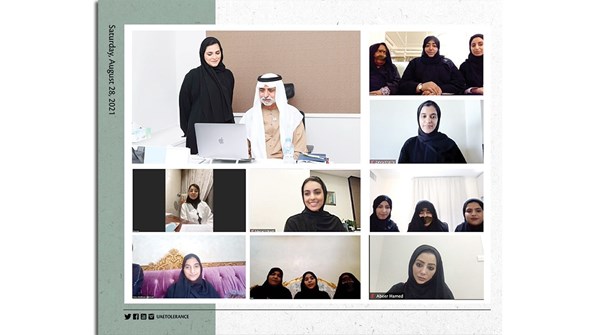 His Excellency Sheikh Nahyan bin Mubarak Al Nahyan, Minister of Tolerance and Coexistence, confirmed that the founding father, Sheikh Zayed bin Sultan Al Nahyan, may God rest his soul, focused on investing in the sons and daughters of the UAE for five decades, and it was undoubtedly the greatest investment, explaining that its results were impressive, not for the Emirates. Only, but the whole world.
This came during the inauguration of the session “Trans-generational Tolerance … a girl, a mother, and a grandmother”, which was organized by the Ministry of Tolerance and Coexistence in cooperation with the Ministry of Community Development and the Family Development Foundation yesterday, and included Emirati families.
His Excellency Sheikh Nahyan bin Mubarak said that he is proud of the distinguished participation of all generations of Emirati families in this session, which focuses on a very important topic, which is the authentic Emirati values, and how to transmit them from one generation to the next.
His Excellency valued the efforts of our wise leadership represented by His Highness Sheikh Khalifa bin Zayed Al Nahyan, President of the State, may God protect him, and his brother, His Highness Sheikh Mohammed bin Rashid Al Maktoum, Vice President and Prime Minister of the UAE and Ruler of Dubai, may God protect him, and his brother, His Highness Sheikh Mohammed bin Zayed Al Nahyan, Crown Prince of Abu Dhabi and Deputy Supreme Commander of the Armed Forces, from efforts to enhance the status of women and empower them in various fields, and their emphatic keenness to arm women with knowledge, experience and knowledge, along with their keenness for the daughter of the Emirates to be a living embodiment of authentic Emirati values, including tolerance, coexistence and respect for the other. in all its actions and attitudes.
Grandmother Maryam Saeed Al Mazrouei (Ras Al Khaimah) said: We have inherited the authentic Arab values, including tolerance, from our parents, parents and neighbors. Which became more open to different cultures and ideas.
For her part, Grandmother Moza Al Zaabi (Al Ain) said: “The Mother of the Emirates” is our role model in this field. Her Highness Sheikha Fatima bint Mubarak, with the support of the late Sheikh Zayed, instilled tolerance, generosity and giving in behavior and action, which we are keen to instill in our daughters and granddaughters, stressing The school in Al-Nahda Al-Dhabianiya Society was like a home for science, morals and values ​​together, in addition to what we learned from our grandmothers and mothers. For her part, Mother Maryam Al Kaabi from Al Ain said: The role of the mother is very vital in transmitting authentic values, including tolerance, stressing that she always learns from the attitudes and actions of the sheikhs in different situations, headed by Her Highness Sheikha Fatima bint Mubarak, “Mother of the Emirates.” These values ​​we inculcate generation after generation Jill, as for the “mother” Mozah Fayez Khamis (Umm Al Quwain), she explained that our values, tolerance and giving stem from the true Islamic religion, the behavior of the companions, may God be pleased with them, the actions and sayings of Sheikh Zayed, may God rest his soul, and the sayings and positions of the mother of the Emirates, then the role of the community and the local environment comes Which is the place where tolerance, giving and coexistence are transformed into actions, which can reach the new generations. Arwa Ismail Al Ali (Fujairah) said that she grew up in an environment that focuses on respecting adults, regardless of whether they are from the parents or not, because the value of respect for the great is important, and I also learned from my grandmother and mother how to cherish my country and its values, and its rational leadership, and how to be tolerant with everyone without exception. .