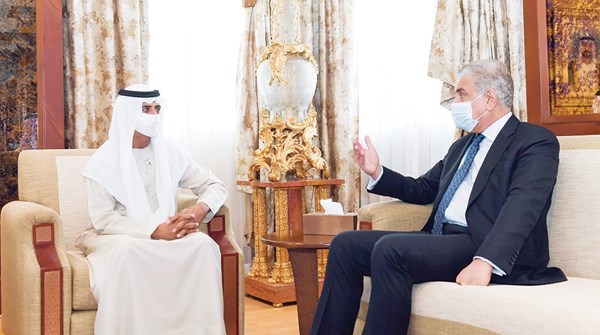 His Excellency Sheikh Nahyan bin Mubarak Al Nahyan, Minister of Tolerance and Coexistence, received at his palace yesterday, His Excellency Makhdoom Shah Qureshi, Minister of Foreign Affairs of the friendly Islamic Republic of Pakistan, who is on an official visit to the country.
The meeting was attended by Afzal Mahmoud Mirza Sultan Mahmud, Ambassador of the Islamic Republic of Pakistan to the State, and a number of officials. His Excellency Sheikh Nahyan bin Mubarak Al Nahyan welcomed the servants of Shah Qureshi and the accompanying delegation, and discussed ways to strengthen cooperation relations between the United Arab Emirates and the Islamic Republic of Pakistan in a way that serves common interests, and they exchanged views on a number of issues of common interest.
The two sides reviewed the developments of the “Covid-19” pandemic, the precautionary and preventive measures in the two countries, and measures for joint action to confront any developments or repercussions to limit the spread of the Corona virus.
The two sides touched on the exceptional preparations made by the UAE to host the world during Expo 2020 Dubai, one of the most important global events that coincides with the golden jubilee of the UAE, and confirmed that Expo 2020 will embody a new success story for the UAE that will be added to its record of achievements by promoting joint action among the countries of the world. In order to preserve the planet and serve humanity. His Excellency Sheikh Nahyan bin Mubarak Al Nahyan affirmed that the UAE, under the guidance of its wise leadership, is keen to strengthen relations of cooperation and friendship with the countries of the world, openness to all cultures and civilizations, and build bridges of cooperation and rapprochement that contribute to strengthening joint ties between it and the countries of the world. His Excellency said that the UAE and the Islamic Republic of Pakistan have historical and solid relations that are getting stronger and stronger in light of the interdependence and cohesion between the two countries thanks to the support and patronage of the leaderships of the two friendly countries in order to achieve the aspirations of their peoples.

The Cabinet is reorganizing a number of federal boards of directors