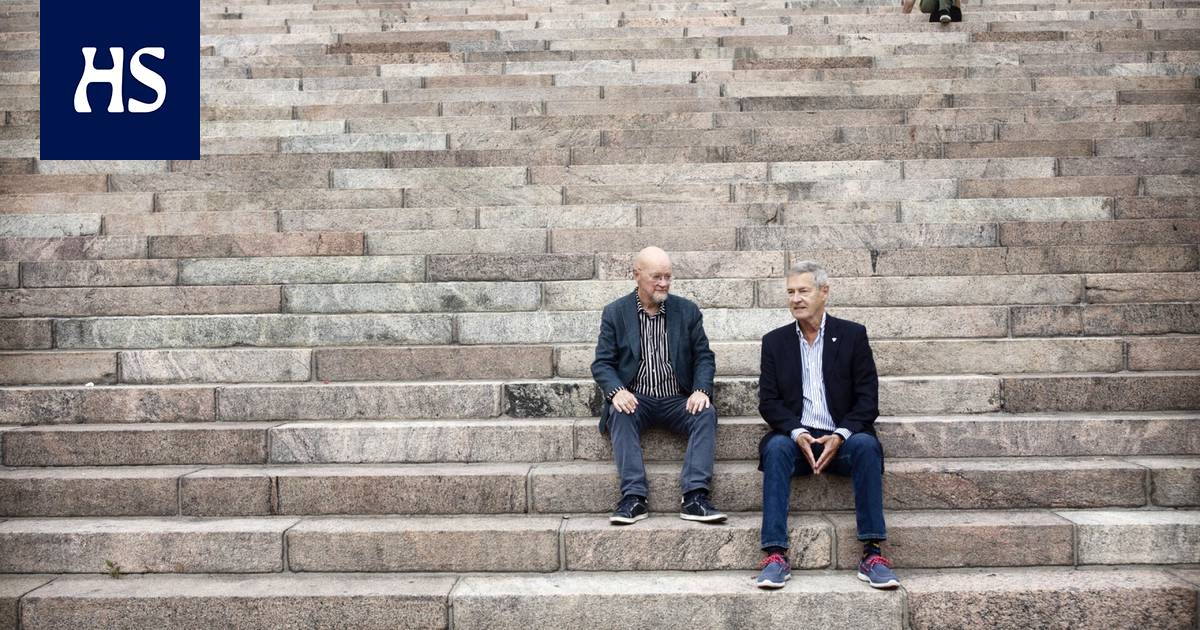 Osmo Soininvaara and Harry Bogomoloff have been following the development of Helsinki since the 1980s. During that time, according to the commissioners, among other things, structural corruption has been eliminated and the city has become a much more comfortable place to live.

Helsinki the town hall is still quiet in the early afternoon of early August. It is Wednesday, but there is no council today. An inaugural meeting has been held, the actual issues will be attacked in late August.

Osmo Soininvaara (green) and Harry Bogomoloff (kok) have arrived for a joint interview in the lobby of City Hall. The proposal for the interview and the description at the Market Square did not arouse the enthusiasm of the delegates: both say that there is no abrupt basis for market coffee.

So let’s stay inside Engel’s blue Empire House, where both interviewees have spent a considerable amount of time during their lives.

Soininvaara and Bogomoloff are the most experienced delegates of the new council. Both rose to the council in 1985 and have been on the council without interruption ever since.

So this season is the tenth of the veterans. About half of the lives of both have been on the council: Bogomoloff is 77 years old, Soininvaara is 70 years old on the date of this story.

Years in Helsinki’s highest decision-making body will soon be 37 years behind each. Both ran for the first time in municipal elections in 1984 and have since been re-elected in every election.

As the new term of office now begins, it is time to ask two outspoken statesmen in municipal policy: Where is Helsinki coming from? And where is it going now?

About half of Bogomoloff’s and Soininvaara’s lives have passed in the council.

Autumn In the 1984 elections, the position of Helsinki’s largest party was redeemed by the Coalition Party, which won 26 seats on the council. The SDP was second in 19 places. Most recently, it had managed to overtake the Coalition as the largest party in 1972.

The Greens participated in the election for the first time and immediately won 7 seats. Ville Komsi had already sat on the council in the previous term, but at that time the group’s name was still the Helsinki movement.

“After all, Greens were not originally founded in Helsinki as a nature conservation movement. It was the Helsinki movement, which considered, among other things, zoning policy and welfare services. It focused very much on urban planning, ”says Soininvaara.

Soininvaara is one of the founders of the Greens. Already in his first term, he rose to the city government as the only green.

The first two years went practically as a full-time urban politician. In 1987, a new full-time job opened up for Parliament. During his political career, Soininvaara has served as chairman of the Greens and Minister of Basic Services Paavo Lipponen (sd) in another government.

Bogomoloff for its part, decided to run for office after ten years as CEO of the Icefield Foundation. He wanted to promote sports and sports.

“I met municipal politicians at the Helsinki Ice Rink. There were the people on the sports board and the deputy mayors running in the same auditorium as me. I looked at that gang and thought that it might not be very difficult to get along with that gang. I ran for office, and since I was already a familiar man in ice sports, many knew me and became elected. ”

Bogomoloff, or “Bogo,” is known as a hockey influencer and has not embarked on kingdom politics. On the municipal policy side, Bogomoloff has held top positions: chairman and member of the city government, coalition group leader, deputy chairman of the council and secretary of the coalition group.

“In 36 years, I’ve been out of the top spot for only half a year. It has got a good view of all this. Now I’m going to be more in the background. ”

Helsinki was in the mid-1980s in many ways a completely different city than it is today. What were on the council’s agenda then?

“The scale just was different.”

However, the way of thinking on many things was completely different from today. Soininvaara raises, for example, changes in the housing policy of that time.

“That’s when the zoning of residential plots for beaches was stopped. Today, no one could imagine that, for example, Kaivopuistonranta would be closed to people and one detached house would be put in it. But then that was done. ”

“If you haven’t seen anything other than an official organization, you can’t realize how ineffective it is.”

Substantive issues more, according to Soininvaara and Bogomoloff, the way of making policy has changed over the decades. The commissioners recall the 1980s, when the city’s decision-making was rampant with what Soininvaara calls corruption and Bogomoloff’s good brother clubs.

It is a matter of the directors of construction companies and housing investment companies sitting as chairmen and vice-chairmen of the Urban Planning Board. So they were directly deciding on the zoning of the city and who was allowed to build on the plots – in other words, promoting the business of their companies.

The big construction companies of that time were Haka, Polar and Arjatsalo. Sato was an influential home builder.

“It was the way the country was, and it wasn’t criticized by the press either. That kind of thing would never go through today, ”says Soininvaara.

According to Soininvaara and Bogomoloff, the country’s way began to unfold in the 1990s, along with other social developments.

The bureaucracy, on the other hand, is still too rigid in their view. In the opinion of the commissioners, the running of the urban machinery has not become much more smooth over the decades.

“If you haven’t seen anything other than an official organization, you can’t realize how inefficient it is,” Soininvaara says.

One A clear change that has taken place over the decades is the revolution in Helsinki’s political power relations. The city had long established itself as the tip of the two, the Coalition and the Sdp.

“We had a very good cooperation with the demarches for a long time. There were more common interests than one could suddenly imagine, ”Bogomoloff says.

However, the Greens gradually increased their support so that in 2000 the party overtook the SDP for the first time as the second largest party. Now the Greens have long sought a number one seat but fell short of the Coalition Party by just under six per cent and five seats in the summer election. Both parties lost seats, and the demars and the Left Alliance behind each received one additional seat.

Helsinki has grown from more than 150,000 inhabitants since the 1980s. According to Soininvaara and Bogomoloff, the city has at the same time become a much better place to live. Picture: Heidi Piiroinen / HS

Despite the election losses, the Coalition Party and the Greens remain the clear top two. According to the delegates, the gig of power relations that has taken place over the decades can be seen in the direction of Helsinki’s politics.

One example of the change is the historic large-scale healthcare outsourcing project from the previous election period. The coalition of the Greens and the Coalition Party decided to outsource the Kannelmäki health center to a private service provider, and it was also decided to establish a new, privately produced health center in Viiskulma.

On the greens and the Coalition has, of course, many of its line differences and one of the strongest is related to traffic. When Soininvaara and Bogomoloff meet, that difference is especially emphasized, as both are profiled in traffic matters: Bogomoloff as a defender of car traffic, Soininvaara as a driver of new public transport solutions.

During the interview, “Ode” and “Bogo” get involved in long debates about the Crown Bridges and the vitality of the city center, among others.

The debate is full of familiar arguments: Bogomoloff thinks the center will wither when the streets are closed to passenger traffic and public transport investments are too expensive. According to Soininvaara, the investment will pay for itself and the parking spaces required by cars in the city center would only reduce the area’s attractiveness.

“Now Ode can say that‘ yeah, they have been turned into a pedestrian street ’. But now it’s just not those walkers because walkers can’t get here, ”Bogomoloff replies.

“I got to know the municipal politicians at the Helsinki Ice Rink. I looked at that gang and thought that it might not be very difficult for that group to make ends meet.”

Although there are contradictions, on at least one point the commissioners firmly agree: Helsinki has developed considerably in less than 40 years.

“Helsinki is a very much better place to live now than in 1985,” says Soininvaara.

According to Bogomoloff, the big development is visible in all parts of the city.

“If you even think about day care or healthcare. After all, everything is a better model. ”

Soininvaara emphasizes the importance of zoning for making Helsinki more comfortable. In his opinion, the city has slowly developed in such a direction that everyday life is more pleasant.

According to Soininvaara, it is not due to big individual decisions, but it is a matter of changes of direction. He gives an example:

The Viikki treatment plant was opposed because of the price. Eventually, however, it was decided to build it, and apartments were zoned for the site of the Eira treatment plant.

“From such many small decisions, a better city has become,” Soininvaara says.

Municipal policy does not always enjoy great popularity, at least if you look at the turnout. For many politicians, municipal politics is a springboard to parliament and will eventually remain secondary to national politics.

However, for both Bogomoloff and Soininvaara, the continuation in Helsinki politics has been clear for decades.

“For me, developing Helsinki is a passion,” says Soininvaara, who also merit in national politics.

Bogomoloff, on the other hand, has been driven by a clear vision of his own role as a trustee in sports matters.

“I have had no clear mission other than to do my best to promote exercise for children, adults and seniors. Someone has to watch over these things, and I strive to be that person. ”

Council veterans Soininvaara and Bogomoloff are often very far apart in their political lines. However, candidness is a trait that both say they value in the other. Picture: Heidi Piiroinen / HS

Now each has a tenth season ahead. What are the fate of Helsinki over the next four years?

Bogomoloff highlights the change in the city’s economy brought about by the sote reform. Nearly half of the city’s budget is spent on social and health care, and after the reform, municipal tax revenues will be transferred to the state and granulated in so-called welfare areas. Helsinki is one of the losers in this distribution.

“How do you adapt to it?” Bogomoloff says.

Soininvaara, on the other hand, raises climate issues. Helsinki’s goal is to be carbon neutral in 2035, and achieving this goal will require major changes. For example, the burning of coal must be replaced by forms of renewable energy that are just being planned.

“Very big decisions have to be made.”