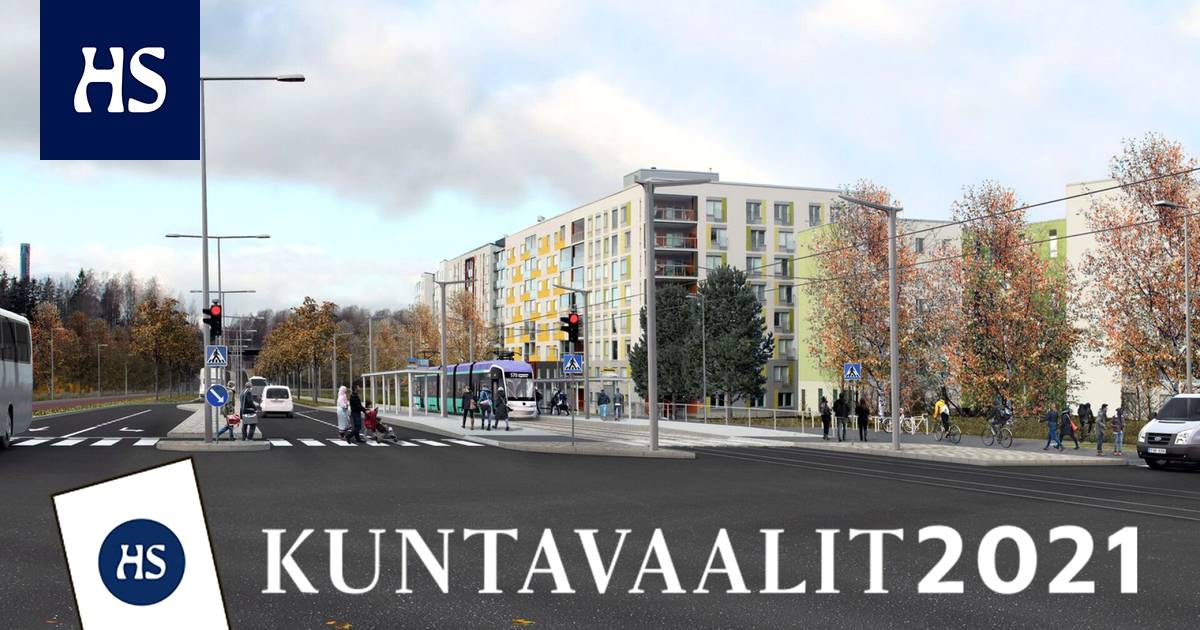 The future council will decide the fate of the tramway that has become an election theme. Based on HS’s election machine responses, the parties are also divided on sote issues.

On Sundays After the municipal elections, Vantaa will be led by a new 67-member city council, which will have to solve various issues related to people’s daily lives over the next four years.

Future delegates will also outline, at least until the social reform, how many social and health services will be organized. Are services concentrated in large local centers or are local services favored in as many districts as possible?

Based on Helsingin Sanomat’s election machine responses, Vantaa’s current service network will be centralized quite a bit in the next council term.

The values ​​shown in the graphs are the averages of the responses of the Vantaa candidates by party.

Vantaa is planning for Tikkurila a large wellness center bringing together social and health services at many different addresses and in poorly rented premises.

Based on HS’s election machine responses, Tikkurila’s EUR 115 million wellness center may remain the only large service center in Vantaa.

Only the Coalition Party and Liite Nyt are leaning towards the centralization of the service network.

Chairman of the Council Antti Lindtman (sd) somewhat disagrees with the centralization of SOTE services.

If the opinions of the municipal candidates were divided on the centralization of services, they are significantly in agreement with the need for medical staff.

Practically all parliamentary parties are in favor of hiring more nurses and doctors in Vantaa. Admittedly, many point out that hiring additional forces has so far not been dependent on the will of decision-makers when there are no applicants.

Deputy Mayor of Vantaa Timo Aronkydön according to the shortage of medical staff is a common problem in the cities of the metropolitan area. Vantaa has a couple of percent of the vacancies for doctors unfilled.

There is a need to hire additional people precisely because so many people are moving into the city, the current chairman of the Social and Health Committee emphasizes in his election election response. Pirkko Letto (sd).

Vice-Chairman of the Board Maarit Ranta-aho (kok) calculates that the change in the caregiver sizing of the Elderly Services Act already means hiring 500 new caregivers for housing services.

Vantaa the city’s first tramway has now been planned for more than a year, and its fate is set to be decided by the city council in 2023.

However, the Vantaa tram became such a clear election theme in these municipal elections that the Facebook pages of Vantaa’s resident groups have even wondered if anything else can be talked about.

The responses of the candidates who responded to the HS municipal election machine were roughly evenly distributed among the supporters and opponents of the tram.

The tramway gets an almost complete knockout from basic Finns. The Greens are equally in favor of it.

Of the current ruling parties in Vantaa, the Social Democrats are strongly in favor of the project in their answers. Instead, the Coalition Party candidates are completely divided.

The preliminary cost estimate for the project is EUR 393 million, of which EUR 267 million would remain to be paid to Vantaa. The state’s share could be about 114 million and the city of Helsinki’s 12 million euros.

Vantaa has been brewing as a herald of digital teaching in schools for several years.

In the early stages, digital teaching spoke to both parents and teachers because the change in teaching did not happen smoothly. There were problems with equipment and local area networks of schools.

After the Crown Year, almost all municipal election candidates will flag for a digital leap.

Minister of Education, Plenipotentiary Jussi Saramo (left) sums up the message of many Vantaa candidates about the seven-year transition period.

“It [digiopetus] I guess it will go too far at first, but now we are starting to know how to use it for the benefit of the student. It is essential that everything is done by learning, including digital learning, above, and that digital does not become an absolute value. ”

5. The future of parking

In the past during the election period, decision-makers have talked about the city’s parking arrangements and the lack of parking spaces, especially in Kivistö.

Last December, the technical board decided to expand the payment areas for street parking in Tikkurila, Myyrmäki and Kivistö.

The change in parking pricing will bring an estimated 300,000 euros more to the city’s coffers.

Many of the municipal election candidates approved the parking reform, because otherwise the economy would have had to be rebalanced somewhere else.

Based on the election machine responses, some of the candidates did not know the reasons for the change, but assumed that the fee increases would accelerate the circulation of parking spaces. There is hardly any support for further price increases.