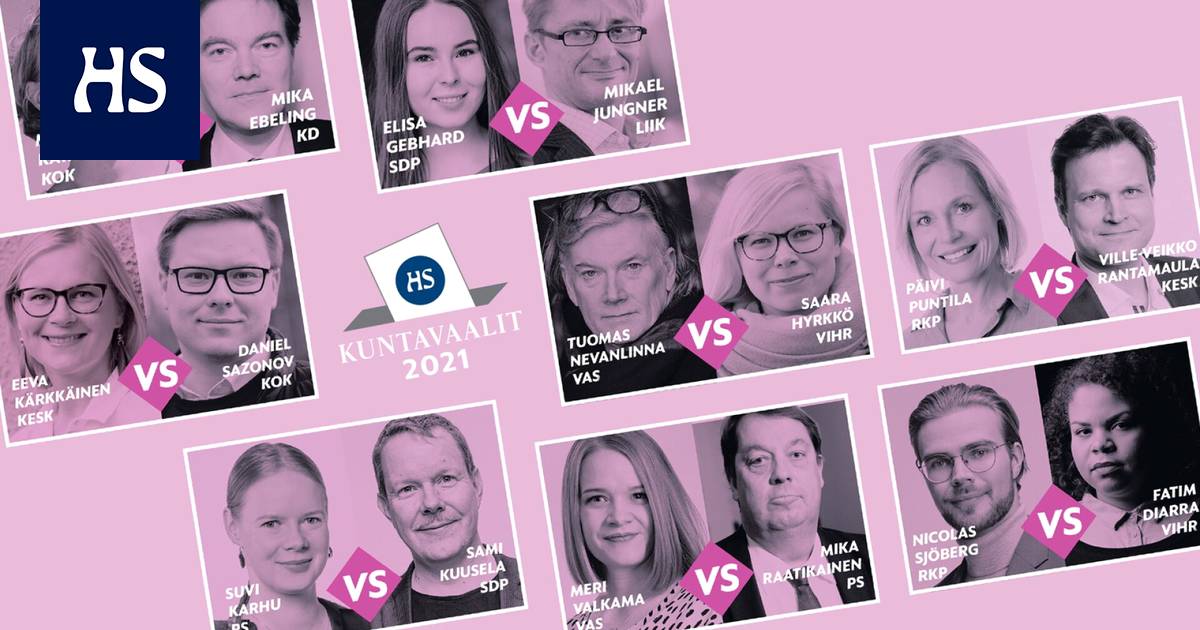 The virtual election market brings ballots to readers ’living rooms on Sunday. At the center of the square is a competition in which politicians compete in rhetorical skill.

HS organizes on Sunday from 3 to 5 p.m., the Virtual Electoral Market Democracy Event.

The virtual election market offers voters the opportunity to get to know the candidates in the metropolitan area. Due to interest rate restrictions, election campaigns have been conducted more narrowly than usual.

At the center of HS’s event is a live rhetoric competition from Sanomatalo in Helsinki, in which the municipal candidates in the Helsinki metropolitan area compete in an important sport for politicians: speaking skills.

In the competition, 16 municipal candidates will compete against each other.

The judges of the rhetoric competition are the political journalist Unto Hämäläinen and a political scientist Johanna Vuorelma. The event is hosted by HS’s financial journalist Veera Luoma-aho and policy provider Marko Junkkari.

This time, the public will not be admitted to the scene due to recommendations related to interest rate restrictions.

Viewers at the same time, they will also be able to visit the parties ’virtual election tents and ask questions to candidates in the metropolitan area. Nine parties broadcast live election broadcasts on their Facebook pages, which can also be followed on the HS website and in the app.

The Coalition Party, Sdp, the Center Party, the Greens, the Basic Finns, the Left Alliance, the Rkp, the Christian Democrats and the Movement Now participate in the virtual election market.

In the broadcast, the head of HS’s city editorial office Lari Malmberg contact virtual election tents and ask for the latest party news.

Municipal elections will be held on Sunday, June 13th. The party chairmen will debate in the HS presidency exam on June 9th. All HS municipal election cases are available at HS.fi/election.

This will allow you to follow HS’s municipal election coverage

Find your candidate on the election machine

The election report summarizes the most interesting topics of discussion

Started on Tuesday Election report is a frequently updated news blog that brings together the most interesting municipal election phenomena and topics of the day.

The election report is made by HS’s city journalist Noona Bäckgren and policy provider Elina Kervinen. They follow the main events of the election from morning to night.

The election report will not be silenced until the results have been chewed after the election.

Bäckgren and Kervinen want readers to give tips on interesting phenomena and topics. They can be sent by e-mail to noona.backgren@hs.fi and elina.kervinen@hs.fi.

The election is also featured on the HS Vision Visio podcast and the News Report podcast.

Journalist for HS’s economics and politics in the Elio podcast election series Emil Elo explores the values ​​and power of society with municipal decision-makers from different parties. Elo plays a strategy game with politicians and seeks an answer to the question of an ideal society.

In the news report podcast, editors Marko Junkkari and Maria Manner go through the main topics of election week during the election.

On June 13, it will take place: New councils will be elected to Finnish municipalities.

The HS election studio monitors the progress of the vote count with the sharpest commentators. The live broadcast will see fierce competition for the position of mayor of Helsinki Juhana Vartiainen (kok) and Anni Sinnemäki (green) interviews immediately after the announcement of advance votes.

The chairmen of the parties will also be interviewed immediately afterwards. If the corona situation allows for the safe organization of election observers, HS will be present in moments of both joy and sorrow.