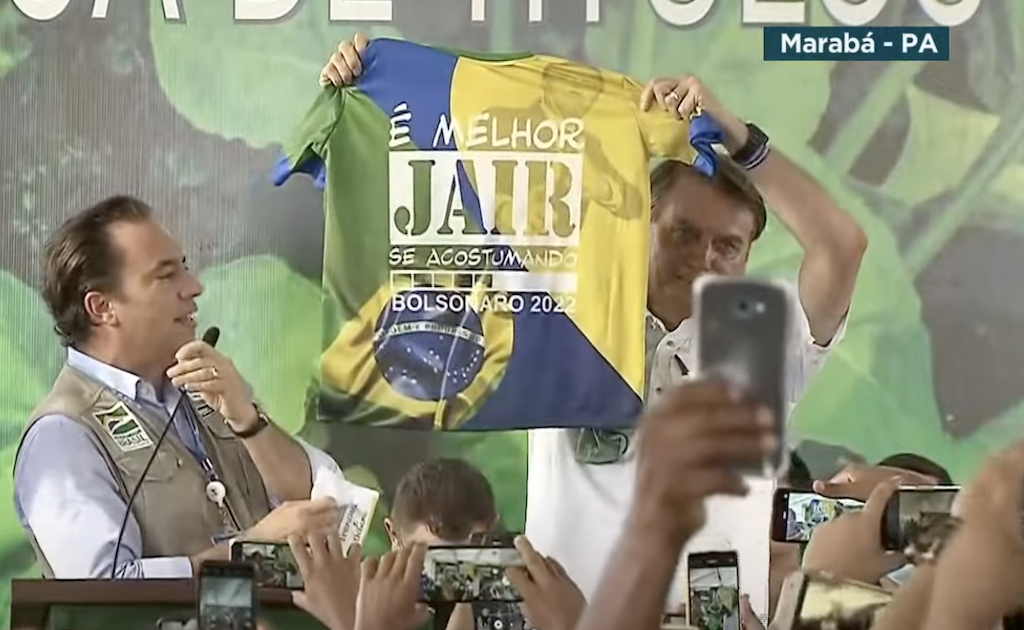 The Electoral Public Ministry asked on Friday (June 18, 2021) that the TSE (Superior Electoral Court) fine President Jair Bolsonaro and other government officials for early electoral propaganda. Earlier, he received and held up a T-shirt with the message “Jair better get used to it. Bolsonaro 2022” during an act organized to deliver titles to rural properties in Marabá (PA).

Deputy Electoral Attorney General, Renato Brill de Góes, signs the representation. According to him, “in addition to the context of the speeches given at the event, there was a clear conscious act of anticipating the campaign, which is prohibited by electoral legislation”. here is the whole of the petition (849 KB).

Before showing the shirt to the public and the cameras, says Brill de Góes, President Jair Bolsonaro read what was written on the front of the fabric.

The deputy PGE also asked for the imposition of fines for improper use of the public machinery to other authorities, such as federal deputy Joaquim Passarinho (PSD-PA) and the special secretary for Land Affairs, Luiz Nabhan Garcia. Among them, there is also Pastor Silas Malafaia.

The pastor criticized, without naming names, “the corrupt, bandit, who plundered this country”.

He also said that President Bolsonaro’s enemies will not prevail. “They looted the country, their health, they stole billions, these are the real genociders. If they don’t have hospitals and ICUs, it’s because of this bunch of thieves”.

For the deputy attorney, the position of president was not about “a mere official public act typical of government, but a true public act of anticipated electoral campaign, with the personal promotion of the represented Jair Messias Bolsonaro as candidate for the 2022 elections”.

President Jair Bolsonaro said at the ceremony that he would like to see state governors walking alongside the population and criticized the adoption of restrictive measures during the covid-19 pandemic.

“How I would like governors to do what I do. In joy or in sadness, we have to walk with the people, to whom we politicians owe absolute loyalty”, said Bolsonaro.

And he added, at the end of the speech: “We feel a little of what is the dictatorial fury of a few governors in Brazil who took away the right to come and go from you. Our freedom is our greatest good, even greater than our own life”.

Minister Tereza Cristina (Agriculture), Ministers Tarcísio de Freitas (Infrastructure) and André Mendonça (General Attorney of the Union) and Pastor Silas Malafaia accompanied the president. It was the 3rd time that the Chief of Executive visited the State.

Minister Tereza and Minister André Mendonça wore a mask. The president, pastor Silas and minister Tarcísio did not use protective equipment against covid-19.

At a certain point during the event, President Bolsonaro asked for the removal of fences that blocked the audience’s access and promoted agglomeration.