Mountaineers: why are they risking their lives to conquer a summit? 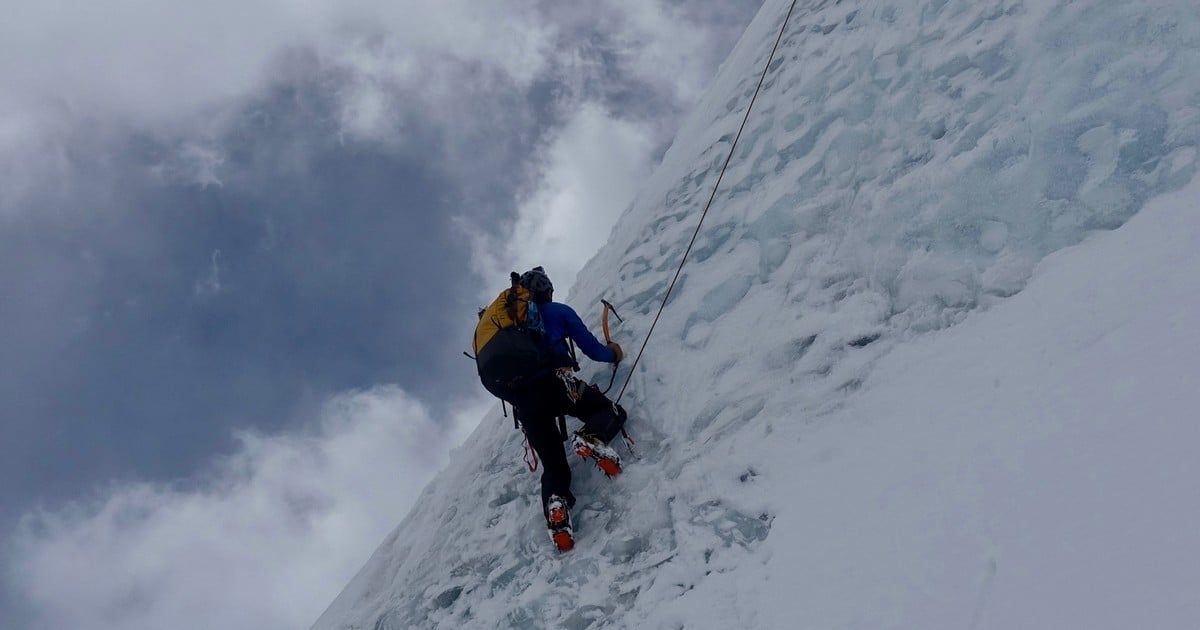 When talking to mountaineers and climbers, men and women who were at the top of the top, they do not find answers but questions. They don’t have an explanation about Why do they risk their lives to go up and then risk it to go down. Nor do they know why they do not stop thinking about the next climb, nor do they know how fear lasts for a sigh and then they continue as if nothing had happened.

Analía Ibáñez reached the summit of 4,200 meters and almost died on the descent. She was missing, they rescued her and had to intern her. Live to tell. He has a family under the mountain. And yet he can’t wait to get back up.

Roxana Riveros He is a mountain guide and rescuer; and her husband, Juan Manuel Alvarado, mountaineer and mountaineer. They live in Mendoza. Juan Manuel dreams of mountains around the world. Roxana says that in the rescues she made, she ran into danger many times and several times with death.. When asked why to climb so many meters, he replies: “I’ll tell you about it with the title of a book that I like: The conquerors of the useless”. It was written by the French Lionel Terray, one of the most important mountaineers. Between the 40s and 50s he reached the highest peaks. In 1965, at the age of 44, he died in an accident while climbing. In the environment he is almost a God. “I don’t know why I do it,” Juan Manuel completes. All I know is that I need to go. “

Juan Sarjanovich makes summits of 8,000 meters that Argentines have not reached. He made twelve, he has two left and his goal was called Project Ochomil. Like his colleagues, he also does not know why he does what he does. But he says: “I never stopped believing in my love for the mountains or in this activity.” He is left with Annapurna, in Nepal, and Nanga Pargat, in Pakistan. I was going to upload them in 2020 but the world situation due to Covid-19 changed the plans. 2021, he believes, will be the year.

He did not know how far it would roll. It was dark. I tried to cover my head. I broke a rib, I cracked my breastbone.

Last August, and almost three days after being lost in Cerro Pacuy in Salta, Analía Ibáñez, a 47-year-old psychologist, was rescued in a complex operation and, injured and dehydrated, ended up in a hospital. “It was difficult for me to become aware of what happened to me,” he tells Live from his house in the capital of Salta.

He had left on August 16, taking advantage of the long weekend. He was with Miguel, a partner. Fourteen kilometers of route. He had experience. He had climbed 5,000 meters on other occasions and his goal was to reach 6,000 in the future. They had studied the Pacuy route. They left at dawn, arrived and the drama began on the descent.

“I had seen the video of a girl who ran the ascent in 4 and a half hours. I calculated 9 hours to go up and then to go down, although generally the descents are faster, ”he says. The natural light left, they relaxed, took photos and decided to return later than expected. But fatigue overcame them and complicated the night.

Analía Ibánez only thinks about going back.

“There came a time when we deviated from the path. A distraction and voila. Either we would go back to where we had deviated, which meant going up again and it was a long way, or we would cut to find the path. Then we got into a ravine, the night fell for us, the ravine was getting deeper and deeper, there was water and little margin on the sides to step on, with slippery stones. And at night you can’t see what’s beyond. “

She was afraid when in the dark it was necessary to climb mountain walls: “I felt terrified.” Since they had no strings, they clung to the stones, many of them loose and others so sharp they made their hands bleed. “But if I let go, I would fall,” he explains.

A stone on her head scared her even more and there she cried for the first time. The only thing that encouraged her was listening to Miguel, who told her that he was a few meters away, to continue.

“There I understood that I had no choice but to climb intelligently and if I fell, I would fall.” He freed himself from that situation, but noises that seemed like animals led to disaster. There he got lost in Miguel and went off the rails.

“I finished the first lap and felt that the momentum was greater. He did not know how far it would roll. It was dark. I tried to cover my head. I broke a rib, I cracked my breastbone. When I stopped my fall, I felt calm. I wanted to stop but couldn’t. I was in a state of shock. “

He fell asleep, woke up with the sun and had hallucinations: “He saw what was not there”, he simplifies. “And my behavior was conditioned by what I saw,” he says. What he saw were people he asked for help. It had no water. He kept walking and asking those imaginary people for help. Another night came, the handy was left without signal first and without battery later.

“I remembered that he had put drinking gels in the backpack. But he didn’t have the strength to break the containers. So I supported them on a stone and with another stone I hit them until they broke. I took them and that satisfied me. “

Salvation came when he saw a baqueano who was not imaginary. A baqueano named Víctor who was making signs to him. He related it to the sound of helicopters the day before. More people appeared. He loosened and dropped. She woke up in the hospital, where her children, Tadeo, 15, and Santiago, 18, were waiting to hug her. But she, she says, felt angry because, in the world of the mountains, helicopter rescue is nothing short of humiliation.

However, he says: “The mountain heals me. I can’t imagine without it ”. He cries and confesses to Viva that he needs to return: “I cannot feel fear in a place that is like my home.”

Roxana Riveros in the mountains.

. That feeling of finding people lying alone, unable to speak, is tremendous.

Marriage on the peaks

“Sometimes I don’t know where I get the strength to endure what it means to rescue a person,” doubts Roxana Riveros, a mountain rescuer with almost ten years of experience. He was born in Mendoza 43 years ago. “We guides expect people to be respectful of the mountains and nature,” he explains, but this is not always the case.

The basis of his experience was in Aconcagua, one of the most important heights in the world. “Some sell Aconcagua as a high altitude trekking and forget that it is a hill with no technical difficulty in terms of walking up, but it has the problem of height (6,962 meters), which can be bad. Many are confident, “he warns. He is concerned about the inexperience of those who start to climb at ten o’clock at night.

Roxana, who is also a physical education and stress trecking teacher, recalls that she experienced “incredible” rescues: “Once we found a person who did not react. I could see his feet under the tent. ‘How is it possible that if a person feels so bad, someone has left them alone?’ I wondered. She had been abandoned by her group and we had to call the patrol and the doctors. That feeling of finding people lying alone, unable to speak, is tremendous. My fears, more than for my safety, go through the responsibility towards the people I rescue ”.

His parents are afraid that something will happen to him every time he goes upstairs. On the other hand, her husband, Juan Manuel Alvarado, is not afraid because they met in this environment. She is the one who feels fear every time he starts an ascent.

“Roxana is modest,” says Juan Manuel with admiration, and explains that his wife is one of the first female guides in the country. Registration 177, clarifies. He is a lawyer, but what he likes is the mountains. He is 44 years old and since 1994 he has been doing what he defines as “controlled risk sport”.

He reached heights of 5,800 meters and he always wants more: “Every other weekend I need to go up. There are many reasons. Sometimes as a challenge, sometimes as a sport. Sometimes to share and other times to be alone ”. Only the possibility of missing the mountain scares him. But there is something that overwhelms him more: learning of the death of a colleague in the mountains.

Juan Sarjanovich on the summit of Kachenjunga (8,586, Nepal). Barely lower than Everest.

Anyone is exposed to danger. There are more risks of dying on a route than in the mountains.

Juan Sarjanovich felt like someone normal and perhaps boring: married, an office worker with a job he didn’t like. “But when I got divorced I kicked the board and put everything on the mountain”he tells Viva.

“Over time I learned to detach myself, to let go. I learned that my office could be virtual. I put down the desktop computer and grabbed a notebook. I started traveling. It was a long apprenticeship that allowed me to do what I do. “

Only then was he afraid. “But the fear of uncertainty,” he clarifies.

He says that the times of therapy are over and that “being in the mountains is getting you tanned.” It is helped with readings by Viktor Frankl and other authors who work on emotions.

He is not afraid of death because “anyone is exposed to danger” and exemplifies with the accidents that are repeated on the roads of his native Santa Fe: “Reach with the statistics. There are more risks of dying so in the mountains ”.

And he adds: “Mountaineering is a way of understanding the world, and it goes hand in hand with nature. It allows me the experience of connecting with my surroundings in a way that I would never achieve in an office ”.

If it weren’t for the pandemic, last year he would have climbed the remaining peaks. But the world stopped and he settled in the mountains of Córdoba to wait and do what he calls preseason. If all goes as expected, in July he will ascend the 8,125-meter Nanga Pargat in Pakistan.

It is not a minor issue that of expenses: passage, logistics and accommodation. Each crossing easily exceeds five thousand dollars. But everything is justified in order to avoid the feeling of confinement and anxiety that mountaineers suffer at home.

“At the beginning of the quarantine I was fine, but in May I exploded. I had my emotions through the roof. I came to training crying; and I’m not lying to you ”, he adds. But the year of confinement also helped him to abandon any job that had nothing to do with the mountains. Live from a rental and will add sponsors. “Sometimes I wonder if I was okay to drop everything right now. But I took advantage. I would never have had nine months to jump in the pool. ” And climb more mountains.

Millions in damage: Bosch hall is on fire

HS Vantaa Among other things, “Mr. Kukkonen” was overshadowed by the designer of the Sibelius Monument – Such is the man who remained silent about the process of creating a work of art for almost 50 years.