MotoGP: Martin got a taste for it, pole also in the Austrian GP! 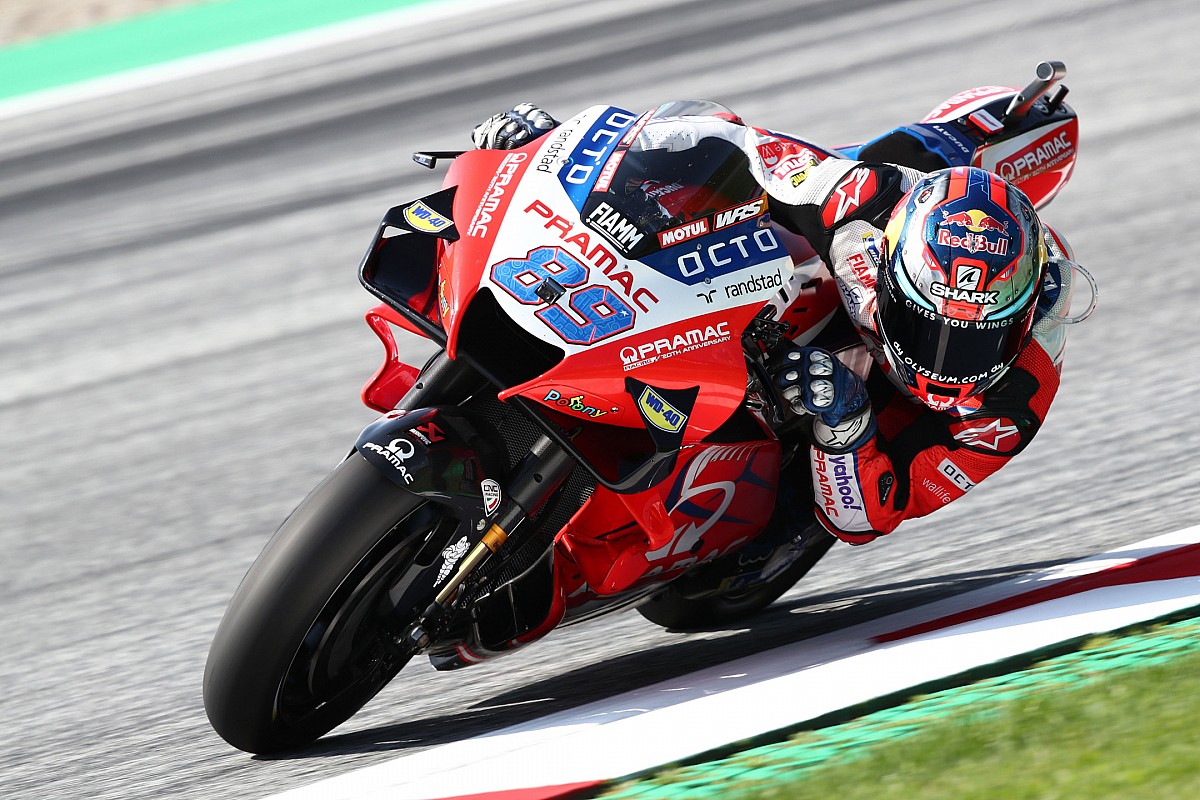 MotoGP seems to have really found a new rising star in Jorge Martin. The Ducati rider Pramac signed his second consecutive pole position in the Austrian Grand Prix, his third ever. All net of the fact that this is only his seventh MotoGP race, given the injury in Portimao.

If last week he surprised everyone with pole and victory, at the second race at the Red Bull Ring everyone was waiting for him and this morning the Spaniard had a little disappointed expectations, finding himself excluded from Q2 due to a crash at the last corner. Among other things, he had also granted an encore in FP4, ending up again on the ground.

“Martinator”, however, did not lose heart and, after passing the cut in Q1, he immediately placed a reference time trial that would have earned him the front row, even if it was far from the time that Fabio Quartararo had managed to place with his Yamaha. Jorge, however, waited for the very last lap to place his paw, going down to a time of 1’22 “643 which allowed him to retouch the track record that already belonged to him after last Saturday’s pole.

Quartararo’s second half, only 34 thousandths off, should still be pigeonholed under the heading “miracles”. If you go to see the top speeds, his Yamaha is always in the last positions. This means that “El Diablo” made a crazy difference in the guided sections. Among other things, he failed to make the second attempt, complaining that he found slow riders waiting for his hook.

To complete the front row we find a Pecco Bagnaia who wants to redeem the difficult race of last Sunday. Once again, the Ducati driver had a couple of laps canceled in the first attempt, then in the second he had to deal with a soft tire that did not perform as he would have hoped. In any case, the front row goal was hit and the race pace is not bad.

The Ducatis once again stood out on the Austrian track, which prefers the engine, with Johann Zarco and Jack Miller who both went to place themselves in the second row, respectively in fourth and sixth position, albeit four and four apart. six tenths from Martin’s other Desmosedici GP. Between the two Reds there will instead be Marc Marquez, who with this second row seems to have made a step even on the dry with his Honda compared to the Styrian GP

A small step backwards for the world champion Joan Mir, who this time, despite the lowering device, was unable to do better than the third row with his Suzuki, finishing with the seventh time at 735 thousandths. Beside him, in eighth position, there will be Aleix Espargaro’s Aprilia, while you have to scroll down the ranking up to ninth position to find the best of the KTMs, which is that of Miguel Oliveira, who qualified from Q1, but had the best of Brad Binder. Honestly, after the change of the front hard tire, more was expected from the RC16s.

The picture of the riders who had access to Q2 is completed with the two Hondas of Pol Espargaro and Takaaki Nakagami, who, however, caught a heavy gap from team leader Marc Marquez, who therefore returned today to make the difference riding a RC213V still not up to par with the best bikes of the lot.

Being the second consecutive race at the Red Bull Ring, we have probably witnessed one of the tightest Q1s of recent times, with four drivers who have played for the passage of the round on the edge of the cents. In the end, the first of those who had the worst was Alex Rins, who with his Suzuki “copied” the 13th place he occupied on the starting grid of the Styrian Grand Prix.

Out also Alex Marquez, who with his Honda LCR had tried to take advantage of Oliveira’s slipstream, but was unable to be faster than the Portuguese. The fifth row will then be completed with Enea Bastianini’s Ducati, who after the first attempt in an excellent position, but then failed to improve as much as the riders in front of him.

Unfortunately, the other Italian riders present in Q1 were all eliminated, starting with Luca Marini, who will start 17th with the Ducati of Sky VR46 Avintia, also behind Iker Lecuona’s KTM Tech3. The rider from Tavullia will share the sixth row with his brother Valentino Rossi, who in turn had tried to catch Martin’s hook, but in the end was over seven tenths slower than the Spaniard with his Yamaha Petronas.

Bad also Danilo Petrucci, who had his best lap canceled for having gone beyond the limits of the track. The KTM Tech3 rider from Terni will then line up 19th, with only Cal Crutchlow behind him, called again by Yamaha Petronas to take the place of the injured Franco Morbidelli and then returned for the double in Austria after retiring at the end of 2020.

We must also remember the two absences on the grid: Maverick Vinales was suspended by Yamaha for deliberately trying to damage the engine of his M1 in the closing stages of the Styrian GP last Sunday. Lorenzo Savadori, on the other hand, was operated on for the fracture of the right malleolus remedied in the accident with Dani Pedrosa. The Aprilia rider should be back on track at Silverstone later this month.