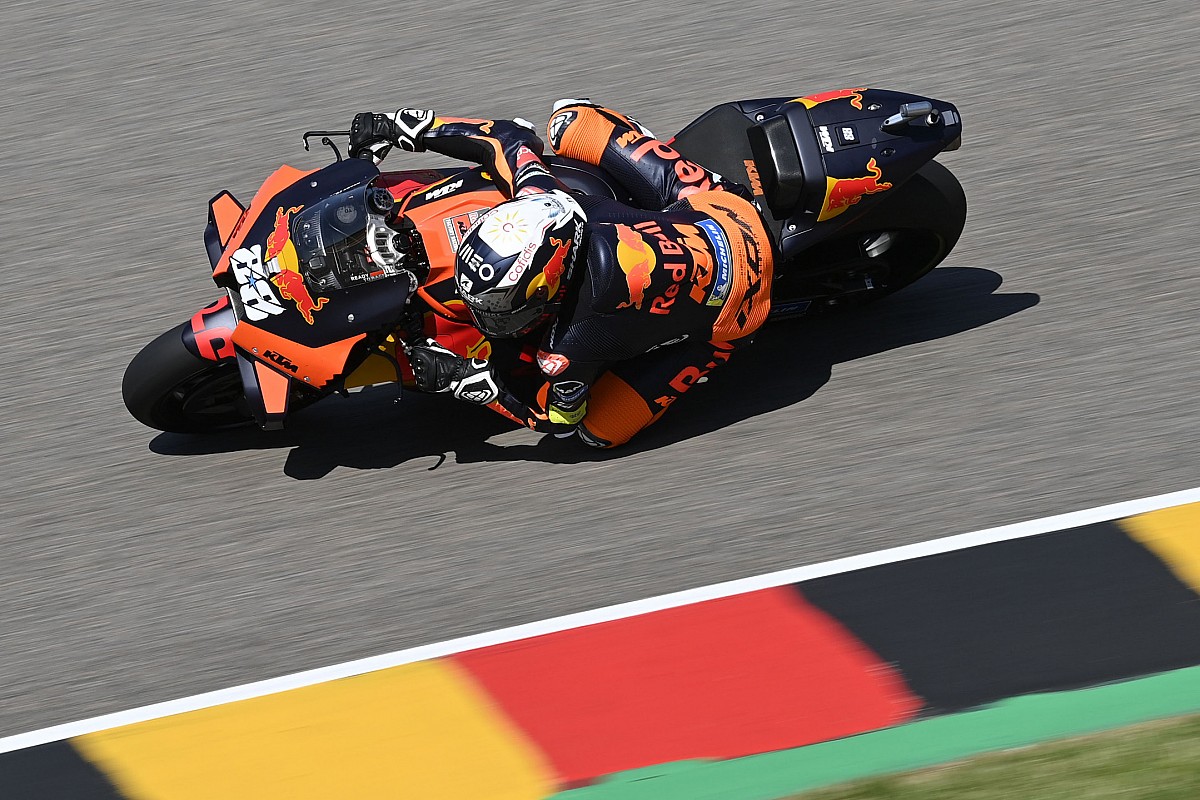 After struggling in the first session, Miguel Oliveira put the KTM back in front of everyone in FP2 of the German MotoGP Grand Prix. The winner of the last race in Barcelona this morning was not able to do better than the 12th time, but in the afternoon he placed a great paw, being one of the few able to break the wall of 1’21 “.

The Portuguese lapped in 1’20 “690, more than two tenths behind his direct rival, the French Fabio Quartararo, who with his Yamaha was the only one to drop below 1’21” besides him. After a few races in the shade, the other M1 of Maverick Vinales returned to the top positions, with the Spaniard occupying the third position at 333 thousandths from the top.

The situation that occurred inside the Suzuki garage is curious, because the returning Alex Rins, fresh from an operation on the right radio, is fourth. His teammate, the reigning world champion Joan Mir, on the other hand, was unable to do better than the 16th time, more than seven tenths behind.

In fifth position is the best of the Hondas, which is that of Pol Espargaro, despite the Spaniard having suffered the second crash of the day at turn 3. In his wake is the Japanese Takaaki Nakagami with the RC213V of Team LCR. Unfortunately, however, Marc Marquez was unable to confirm himself at the level of FP1, when he was the fastest.

The eight-time world champion is in fact in 12th position, right to his brother Alex, just over six tenths behind. And at the moment, therefore, he would be forced to move from Q1. Continuing to scroll through the rankings, in seventh position we find Aprilia with Aleix Espargaro, while it is necessary to reach the eighth to find the best of the Ducatis.

It is that of Johann Zarco, also author of a drittone in the gravel, after which however he resumed the route without problems. Top 10 also for Jack Miller, ninth ahead of a Franco Morbidelli who is probably struggling more than he would have hoped for even on a track where the engine and top speeds matter little.

Too bad for Danilo Petrucci, who actually seems to have taken a step forward with the new KTM chassis and is in 11th position, currently out of Q2 by a handful of thousandths. The real drama is that the other guys in our house occupy the bottom five positions of the ranking.

The most in difficulty seem to be Valentino Rossi and Pecco Bagnaia, who even find themselves in the penultimate and last position. The “Doctor” also ran into a crash at turn 1, while the Ducati driver apparently worked mainly from a race point of view, with heavily used tires, so his position shouldn’t worry too much.

A little further on are the two Ducati riders Luca Marini and Enea Bastianini, closely followed by Lorenzo Savadori’s Aprilia. The brother of art crashed twice in this session, the first at turn 13 and the second at high speed at turn 7. A shame, given that at a certain point he was able to appear in the very first positions. However, it should be noted that with his 18th time he is less than a second from the top.