MotoGP: Ducati on surprise pole in Germany with Zarco 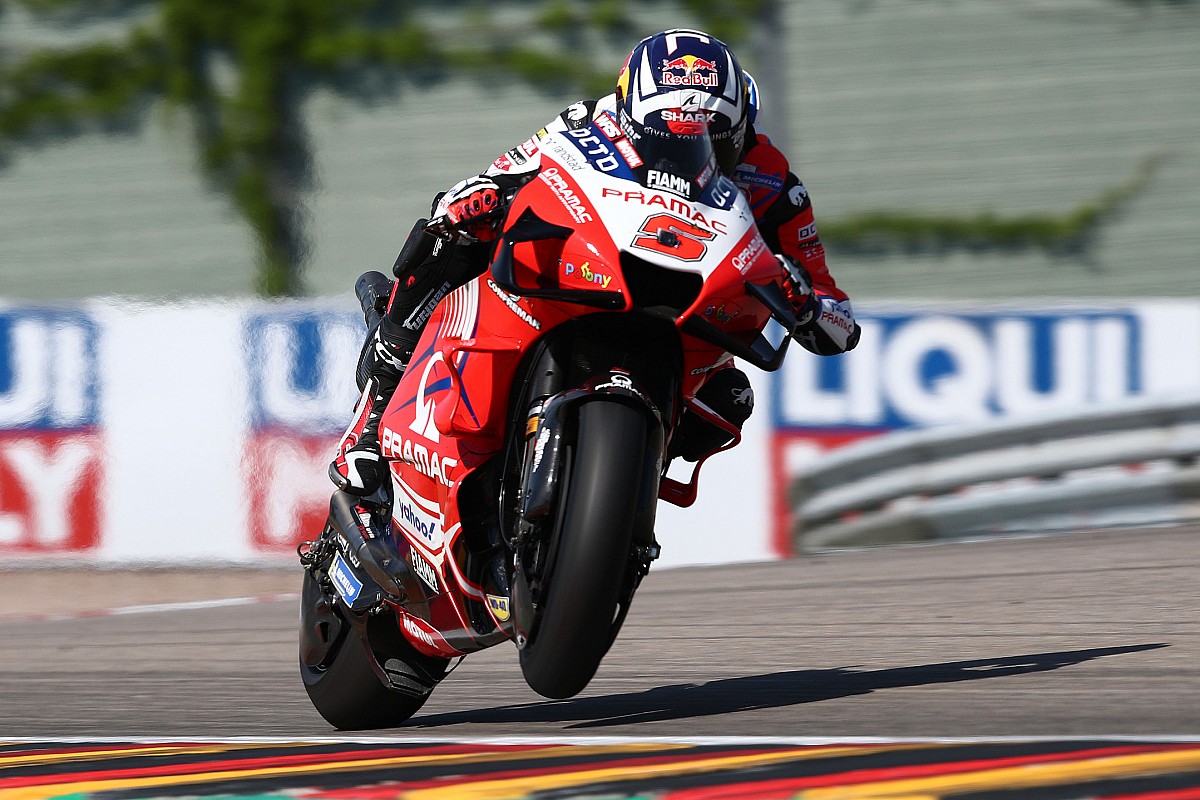 Nobody would have bet on it, but tomorrow a Ducati will start from pole position in the German Grand Prix. Just on a track like Sachsenring, which on paper had to highlight the weaknesses of the Desmosedici GP, Johann Zarco ended Fabio Quartararo’s streak of five consecutive pole positions.

The Pramac Racing rider even dropped to 1’20 “236, exceeding by just 11 thousandths the performance that the Yamaha compatriot had just set. A few moments later, Zarco slipped at turn 4 and his fall, added to that of Takaaki Nakagami at turn 1 gave rise to yellow flags which in fact froze the ranking, which led to the sixth pole of his career in the premier class for the Ducati driver.

If the two transalpine riders confirmed the values ​​of the championship standings, the big surprise of the day is the bike that completes the front row, because in third position we find the Aprilia of an Aleix Espargaro who yesterday spoke of the best weekend of the season. The Granollers driver, however, also made the facts today, closing just 211 thousandths from the top and giving the Noale manufacturer a great result.

Opening the second row will be Jack Miller’s other Ducati, with the Australian who also confirmed his speed in Q2 in T1 and T2, continuing to show limits in T3. The “home garden” of the Sachsenring instead allowed Marc Marquez to go at least to sign his best qualifying of the season: here he won 10 times, 7 of which in MotoGP, and today he set the fifth fastest time just over three tenths , better than the Honda riders.

After yesterday’s great performance, a little more was expected from Miguel Oliveira’s KTM, even if qualifying has never been the Portuguese’s strong point, so he will certainly be one of the riders to keep an eye on in tomorrow’s race. .

A very good performance by Jorge Martin, who, a couple of races after the injury that had kept him stopped for a couple of months, has already found the pace of the best and placed his Ducati Pramac in seventh position. Yet another difficult qualifying instead for that of Pecco Bagnaia: between yellow flags and traffic, the Piedmontese did not manage to have a clean lap and is only tenth, also behind the two Hondas of Pol Espargaro, who passed from Q1, and the aforementioned Nakagami .

Alex Rins also arrived from Q1, also good at being the best among the Suzuki riders despite having been operated on for a fractured right radius just two weeks ago. The picture of the riders who had access to Q2 is then completed by Alex Marquez, who probably lost some feeling due to a crash in FP4.

The first of the excluded at the end of Q1 was Brad Binder, who with KTM at the moment does not seem to be able to “copy” the good that his teammate Oliveira is doing. Sharing the fifth row with him will be the two Ducati Avintia, with Luca Marini 14th and Enea Bastianini 15th.

The latter also experienced a moment of tension with Danilo Petrucci: the ducatista hindered the KTM driver at turn 12 and the rider from Terni didn’t take it at all well, showing him the middle finger. A pity for “Petrux”, who hasn’t improved any more and will start 19th.

Quartararo aside, it was a complicated qualifying for the other Yamaha riders, who were all eliminated in Q1. The one who will start later is Valentino Rossi, even if he will field his Petronas-branded M1 in 16th position. Comrade Franco Morbidelli, on the last lap, seemed to be able to remove the pass for Q2, having an advantage of 54 thousandths at T3, but ruined everything by crashing at turn 13.

Disastrous Saturday for Maverick Vinales, perhaps struggling with the worst qualifying of his career in MotoGP: the Spaniard and his Yamaha will even be in 21st position, with only Lorenzo Savadori’s Aprilia behind him, which probably could have done something in more if he hadn’t crashed at turn 12.

It did not go better for reigning world champion Joan Mir, who had his best lap canceled for not respecting a yellow flag and therefore will only be 17th on the grid with his Suzuki. It is also necessary to point out the crash in which Iker Lecuona became the protagonist, 20th with the other KTM Tech3.