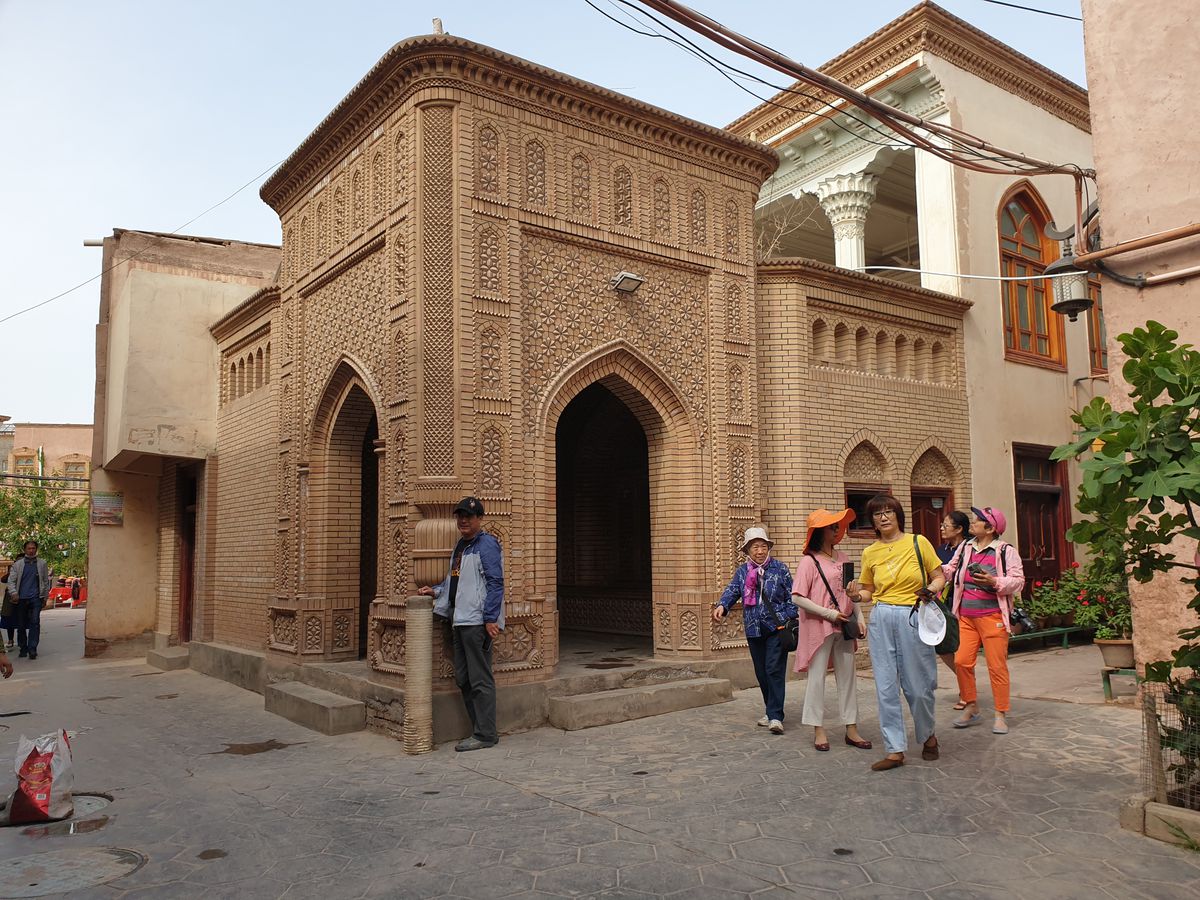 On the winding streets of Xinjiang’s old city of Kashgar, groups of Han tourists – the majority ethnic group in China – wearing visors, cameras and cell phones crowd to take selfies around the next building on their itinerary. A portico flanked by two towers -two minarets-, both broken. “This,” explains the guide, “used to be a mosque. But the authorities withdrew his permit. And it’s good that they did. First, because this is how religious liberalization is fought. Second, because Islam stipulates that every few inhabitants there be a mosque, and custom dictated that the construction and maintenance be paid by the neighbors. Now, since it no longer works, the neighbors save that money and can invest it in other things ”.

Tourists continue to take selfies and the guide, speaking undaunted: “Believers have complete freedom to pray, but in large mosques, built by the Government.” A few hundred meters away, another group also takes photos next to another confiscated mosque, also with the minarets uprooted. The portico has been covered with pale pink plasterboard. “It is a very beautiful color!”, Says a middle-aged tourist, asked what arouses such interest. A few streets away, another closed mosque, also without its minarets or any other symbol that identifies it as such. And another. And another.

On a random walk through the old town of Kashgar, one of the key cities for Uighur culture in Xinjiang, we found about thirty mosques. Of these, only three, including the majestic Id Kah with yellow minarets, the main one in the city, maintain their religious function, all adorned with a waving national flag and the “love the homeland, love the Party” sign. Others have been converted into other functions: vaccination centers against covid, souvenir shops. One got to be transformed into a cafeteria, until its owners had to close it. Another now serves as a urinal for tourists; Inside, it is still possible to distinguish the area where ritual ablutions were practiced. But most are simply closed. The dust on their padlocks, the ubiquitous disconnected surveillance cameras, and the debris peeking inside testify that they have been that way for a long time.

It does not happen only in Kashgar. Satellite images show the disappearance of Uighur cultural references throughout Xinjiang. 500 kilometers to the east, in Hotan, another of the cities with the highest proportion of Uighur inhabitants in the region, the hammer and sickle presides over a monument to “the fundamental values ​​of socialism.” The park where it is located is completely new: it was set up just in time for the celebrations of the centenary of the Communist Party last day 1. In January, that land was a lot. Before still, there was a mosque there, that of the Horse Bazaar, one of the most popular in the prefecture.

A few streets away, some cranes are in full action. On the site where there was another mosque, the posters of the work announce that in a few months a hotel and apartment complex will be built here under a multinational brand. Next to the rebuilt old city, a parking lot occupies the space where the Id Kah mosque used to be.

The report Cultural erasure: Tracing the destruction of Uyghur and Islamic spaces in Xinjiang, of the Australian Strategic Policy Institute (ASPI), estimates that, of the nearly 24,000 mosques that existed in Xinjiang in 2004, around 16,000 – 65% of the total – have been damaged as a result of government policies, most since 2017 Of these, 8,500 have been completely demolished. Furthermore, 30% of important Islamic sites – shrines, schools, cemeteries, integral parts of Uighur culture and their connection to the territory – have also been destroyed, and 28% damaged or altered. A level of elimination such as has not been seen since the times of the Cultural Revolution.

“The deliberate removal of tangible elements of local Uighur and Islamic culture in Xinjiang appears to be a centrally directed but locally implemented policy, the ultimate goal of which is to ‘chinize’ the local culture and ultimately achieve the complete transformation of the thinking and behavior of the Uyghur community ”, says the ASPI study.

This transformation, analyzes by telephone Professor Rian Thum, from the China Institute at the University of Manchester, extends even to houses, their form, distribution and content. “It is very clear from the government documents themselves that they want to change the physical cultural spaces in which Uyghurs live – even the inside of their homes – to mutate them into what they consider to be modern and civilized. The Chinese state perceives Uighur culture as backward and barbaric. Therefore, he sees destruction as something that brings modernity, progress and civilization to a backward people ”.

Also, Thum adds, “they believe that Uyghur culture, which they consider backward, is the reason, or one of the reasons, why Uyghurs resist the Chinese government’s mandate. So that probably explains why they are digging up and destroying all these things. “

China claims that it cares for and repairs Muslim places of worship, and categorically denies that it limits the religious practices of the Uighur minority. “The Constitution of the People’s Republic of China stipulates that citizens have the right to their religious beliefs. No governmental organization, social group or individual will force them to have them or not to have them, nor will they discriminate against them on the basis of faith. All legitimate religious activities are protected, ”a Xinjiang government spokesman said in March.

In a White book published last week, the State Council, the Chinese Executive, maintains that “regarding facilities in poor condition, government departments have resolved potential security risks through reconstruction, relocation or expansion, thus ensuring the safe and quiet practice of religion, respecting the wishes of believers ”.

But the few operational mosques only open their doors on Fridays, and not for the total of the five mandatory prayers. On that holy day, at the authorized time, three in the afternoon, dozens of old Uyghurs can be seen flocking to the thousand-year-old Id Kah mosque. But a smaller one is only approached by three people. “No, we are not going to pray. We are going to talk about our things ”, assures the goalkeeper, before closing the door firmly. As in the rest of the mosques in operation, several cameras monitor the entrance.

Outside of places of worship, religious practice also seems limited. No symbols are seen in public. Possessing a Koran or fasting in Ramadan – NGOs and Uighurs in exile denounce – may be a reason to end up in one of the dreaded re-education camps with which China claims it has defeated Islamic terrorism. Asking about what is read in one of the very few Koranic inscriptions visible in public – in the grave of a cemetery, for example – elicits a unanimous answer: “I don’t know.”

“Muslims living in Xinjiang cannot practice their religion,” says Amnesty International in its recent report. Cas if we were the enemy in a war; Mass Internment, Torture and Persecution by China of Muslims in Xinjiang. “Many Islamic practices that Muslims consider essential to their religion and that were not explicitly prohibited by law are now, in practice, prohibited. Muslims are prevented from praying, going to mosques, teaching religion, wearing religious habits, or giving their children Islamic-sounding names. As a result of the constant, credible threat of arrest, Muslims in Xinjiang have modified their behavior to such an extent that they no longer give outward signs of practicing religion. “

Kashgar, or the capital of Xinjiang, Urumqi, seem less affected than other not so touristy towns, such as Hotan or Yarkand, in terms of the disappearance of their holy places. Although, like the minaretless mosques in Kashgar’s Old Quarter, they seem, above all, to have been preserved more as tourist attractions than as places for religious practice or the preservation of Uighur culture. The former Sachi Medris madrasa in Kashgar has not functioned as a Koranic school for years, and only serves as a setting for visitors to take photos. The Id Kah Mosque, except for the brief period when it is closed for prayers on Friday, charges a hefty entry of six euros for those who want to admire it. The one in the Grand Bazaar in Urumqi houses a market; the small office at its entrance is stocked with President Xi Jinping’s books.

On the outskirts of Kashgar, what has been officially known as the Princess Xiangfei Gardens since 2015 is a very popular attraction among Han tourists: a centuries-old mausoleum, with a superb dome and tall minarets with gleaming emerald and aquamarine tiles. and gualda.

It is a Sufi shrine, and one of the most important places for Uighur culture. It is the mausoleum of Afaq Leaf, a warlord who fought the Qing – the Qianlong dynasty – in the 18th century. The clan he founded established a brief independent state in the mid-19th century. For years, it was a pilgrimage center, where Uighurs came to learn about their history. Today, although the name of the leader does appear on his grave, nothing is mentioned about him, or his life or legacy, in the enclosure.

The gardens, on the other hand, are now a flowery theme park, which with an almost Disney touch celebrate another story: that of a Uighur noblewoman, Xiangfei (Fragrant Concubine, in Mandarin) or Iparhan – her real Uighur name – and love at first seen between her and Emperor Qianlong, the conqueror who definitively integrated the region into the Chinese orbit two and a half centuries ago. The affection between the emperor and his princess was so strong, according to this version, that upon her death he arranged an escort of a hundred men to take her to bury in the landscapes that Xiangfei had loved as a child.

Buses full of Han tourists come every day to see a reproduction of the house where Xiangfei supposedly grew up, the tree he “planted before leaving for Beijing” or the pergola where – this version states – he sang and danced. And, of course, his grave, marked with a red canvas in one corner of the mausoleum. In this version, not very different from the Pocahontas Disney’s Xiangfei / Iparhan embodies the spirit of unity between the two ethnic groups, dating back centuries in history, which is promoted so much in official speeches and posters.

The books prior to the establishment of the People’s Republic in 1949 speak, on the other hand, of the wife of a chieftain in the kingdom of the Kashgar oasis, taken as booty after the triumph of the imperial troops and the execution of her husband. Taken to Beijing, there Iparhan / Xiangfei ended up taking her own life. His body never returned to Kashgar. She rests, as a royal concubine, on the outskirts of Beijing.

Few Uighurs, apart from the ubiquitous bulletproof vest police throughout the region, or park employees, seem to set foot on the once-sacred compound during the day. At dusk, perhaps, it is another story: Han tourists flock to the buses with their visors, their cameras and their mobiles, amid urges by their guides; appeared out of nowhere, a group of elderly Uyghurs chat in low voices on the benches next to the mausoleum.