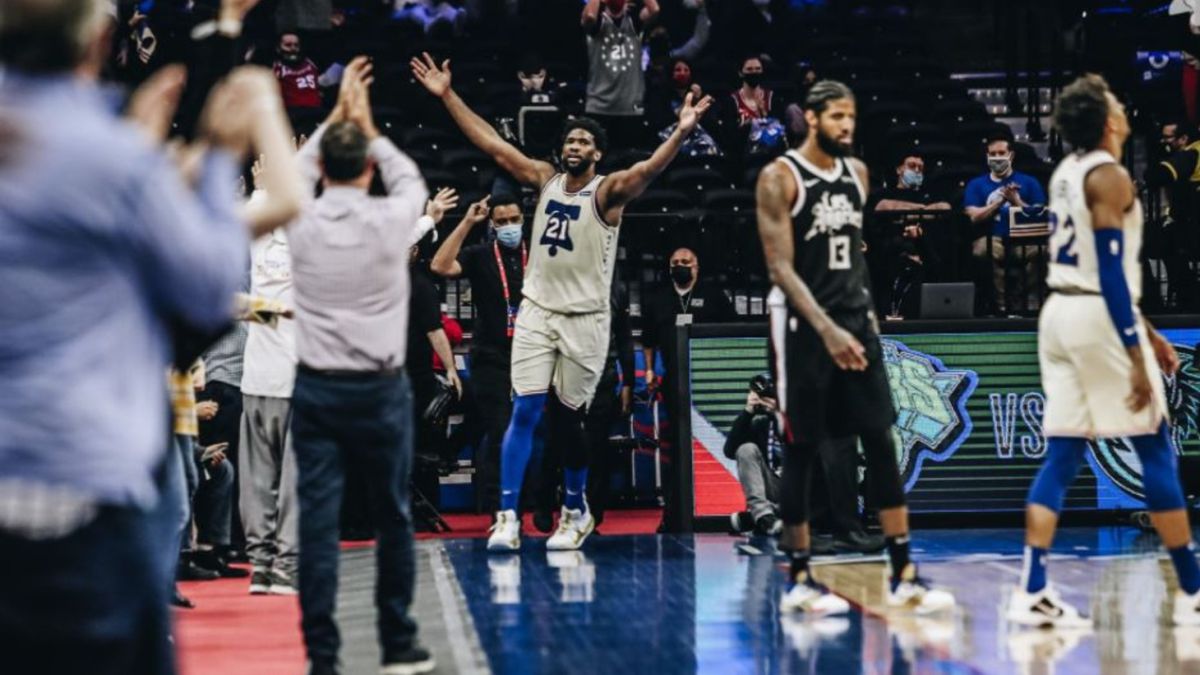 If the Sixers have something, it is a pending account with history. The franchise is historical for many reasons, it has had iconic squads and players who have influenced sportingly and culturally in a competition that does not wait for anyone. Nor to them, who have not conquered the ring since 1983, the third in their history.. Since then, just a Finals, in 2001 with Allen Iverson, and many broken promises and winds of change that in the end have not been so much. The city to which the franchise belongs is also historical: it has real and fictional heroes (long live Rocky Balboa), that is where there is more association with love and brotherhood, and where the fathers of the country declared independence. The fans understand basketball, the cultural power of the franchise and its influence in the city. But he no longer reveres current heroes as they did past heroes, be it Julius Erving and Moses Malone (fo, fo, fo …) or, more recently, Allen Iverson and his social dimension. Maybe the Trust The Process He ended up burning too much an audience that expected more and has not even been able to see a Conference finals in that project that promised a lot but, for the moment, has not given anything. Or perhaps the convening power of the current referents is not as great as that of the past.

One way or another, there are reasons for hope. The firing of Brett Brown and the arrival of Doc Rivers were a double-edged sword. On the one hand, a new voice was needed on the bench, giving a radically different narrative and had a speech that the players believed in. On the other, the demand for immediate results became greater. The years passed, the results did not come, it seemed that Ben Simmons and Joel Embiid were incompatible and the impatience, which has raged in many other places, threatened to do the same in Philadelphia. With Doc Rivers, or before him, Daryl Morey arrived, that boss who left the Rockets after championing the basketball change and that he has known how to surround Embiid and Simmons with shooters, shoot luxury veterans (Dwight Howard) and accommodate a franchise with which he wants to achieve what he did not achieve with James Harden: the ring. And with the manager and coach, the Sixers are having an excellent season.

Against the Clippers, Philly They have not only achieved their fourth consecutive victory, they have also beaten one of the fittest teams in the NBA. The Angelenos had seven consecutive victories and had not fallen since Rajon Rondo’s arrival to the team (7-0), that being from another dimension that seems to do nothing but ends up being, without anyone explaining it, key in the playoffs. Against the Sixers he has gone to 10 points and 8 assists, not inconsiderable numbers, but he has not been able, like his team, with Joel Embiid. The pivot has already left against the Nets (39 + 13) and has done the same this morning, with 36 points and 14 rebounds, supported by a spectacular series from the personnel line, which he has attended up to 18 times for 16 hits. Embiid is curdling the season of his life, averaging almost 30 points and 11 rebounds and legitimately opposes an MVP who will surely steal Nikola Jokic. But there it continues, like a pylon hammer that has exploded at the command of a Doc Rivers who, by the way, was facing his former team.

In addition to Embiid, the Sixers have had the contribution of Korkmaz (18 points, with 5 of 12 in triples) and Ben Simmons, who has done, again, a little of everything (12 + 9 + 6). Danny Green, 11, was the last local player to hit double digits in scoring. In the Clippers, who have Kawhi Leonard’s absence as an excuse (he did not play), a tremendous Paul George stood out: 37 points, 9 rebounds, 6 assists and 14 of 29 in shooting from the field, although 4 of 12 in triples. The forward has had a formidable performance, but insufficient for a team that is in a great moment despite the loss and that looks askance at the Lakers, whom they would face in the first round if they remain sixth. For now the duel is against the Blazers, a much more accessible rival that would allow a much calmer initial playoff battle. For their part, the Sixers, who are leading the Eastern Conference after beating the Nets the other day and extending their lead this morning, are smiling. They have several reasons for this, which can be summed up in one. And his name is Joel Embiid.