Mona Al-Marri: Digital transformation has enabled the UAE to deal efficiently with the ‘Coronavirus’ 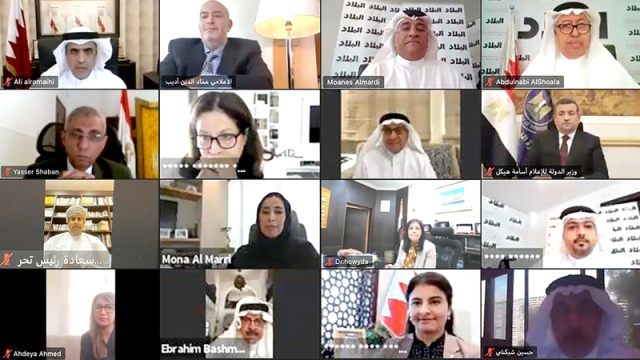 The Director General of the Dubai Government Media Office, Mona Ghanem Al-Marri, confirmed that the UAE realized early on the importance of the transition to a digital environment, which prompted its government to adopt an integrated strategy to translate the vision and directions of the leadership to accomplish this transformation, within specific timeframes and goals, including various sectors. Work, including the media sector, through which national institutions have taken the initiative to adopt solutions that help them maintain their competitive borders in the new digital environment brought about by the Fourth Industrial Revolution, which soon witnessed a tremendous acceleration of its paths, with the outbreak of one of the most difficult challenges the world faced. In its recent history, which is the crisis of the “Covid-19” pandemic.

This came during her participation in the Forum «Arab Media in the Shadow and After the Coronavirus Pandemic», which she organized remotely through visual communication technology, yesterday, by the Dar Al-Bilad Foundation for Press, Publishing and Distribution in the Kingdom of Bahrain, with the participation of a group of Arab media leaders, led by the Minister of Affairs Media in the Kingdom of Bahrain, Ali bin Muhammad Al-Rumaihi, Minister of Information Affairs in Egypt, Osama Heikal, Adviser to the King of Bahrain for Media Affairs, Nabil Al-Hamar, and the Egyptian journalist Imad Al-Din Adeeb, and a group of writers, media professionals, officials of media institutions and relevant government sectors, and members of the academic corps in the Arab world. Al-Marri stressed that “the UAE’s readiness has enabled it to deal efficiently with the repercussions of the (Covid-19) pandemic, which has brought about profound changes in the human community, so that we now hear the phrase (preparing for the post-Covid-19 world),” saying that one of the most important effects is Caused by the pandemic, it unexpectedly accelerated the world’s transition to a digital environment.

She touched on the many variables that the pandemic has caused in terms of work and communication with the world in general, and not only in the media sector, as it is possible to attend conferences today, and move between more than one meeting, seminar and meeting in several countries, in one day, without incurring the hardship of travel. Where technology reduced the elements of time and space, and that what was expected to happen in the world within 10 years, we see today happen before us, and we find that the world quickly moved to the remote education model, while most business sectors resorted to a flexible remote work system as well. And this model may remain even after the end of the crisis around the world.

She indicated that media organizations not supported by governments will face real challenges if they do not initiate the acceleration of digital transformation, an option that has become inevitable, especially after the great repercussions that accompanied the pandemic, adding that in the recent past, news took 24 hours to reach people through Print newspapers, and it may be a little faster for television and radio, but digital technologies today put millions of followers on the air directly from the site of the event with sound and image, and every person who owns a smart phone has become a source of information, news and pictures.

She added: “Despite the positives that the digital environment has brought to the media, it has posed great challenges to the Arab and international media, as the digital space has become a fertile environment for the spread of rumors, false news and misleading information, while the traditional media maintains its competitive edge, represented in the ability to sort, And scrutinize the content, and make sure of the authenticity of the information and news before circulating and broadcasting it to people. As for what we receive through social media, we must think about it dozens of times, and verify it from more than one source before we accept it and acknowledge its credibility.

For his part, Ali bin Muhammad Al-Rumaihi said that the Arab world suffers from a state of media chaos, in light of the presence of more than 1,200 channels, most of which seek to win over the audience, while some of them unfortunately resort to excitement and avoid objectivity in the presentation, in order to attract the largest number of viewers. And even if that is at the expense of credibility and professional ethics, which are sacrificed in order to gain greater numbers of viewers and followers.

He said that the Arab media must keep pace with the rapid global development, and adopt digital options and solutions that help it excel and excel in presenting a useful message to society that lives up to its expectations.

Osama Heikal expressed his conviction that the situation in the world will not return to what it was before the Corona crisis, in the near future, while the effects of the crisis will remain present in many of its frameworks, indicating that the feverish global race to produce vaccines may contribute to alleviating Effects of the crisis, but it will not restore life to its previous state.

He pointed out that the traditional media still adheres to the ethics and professional rules of the profession, unlike the platforms that tend to broadcast information in real time, regardless of their credibility.

Participants in the forum unanimously agreed that the transition to the digital environment has become a reality, a pandemic that has changed standards, changed the foundations, and created a world different from the one that we used to do one year ago from today, and that whoever leaves Arab media institutions from catching up with this transformation will suffer great losses. It graduates him from the field of competition, but rather affects the fate of his presence on the media scene in general.

The Egyptian journalist, Imad El Din Adeeb, stated that the Corona pandemic affected the acceleration of the pace of digital transformation, and the change of the basic standards that control media work, and gave the example with a study conducted by a global expert house, which found that about 66% of viewers of online videos care first. The time period of the content is more than their interest in the guests or the topic of discussion, as the largest audience has clips with a period of less than three minutes, while the number of followers of social media platforms increased in 2020 to more than 3.5 billion followers, with a growth rate for each country ranging between 24 and 40 %.

Coronavirus The epidemic situation in Hus is improving in all age groups, says the director of diagnostics – “Suddenly it will start to rise if caution is weakened”

How to define ‘New Normal’