Mohammed bin Rashid: The future of the UAE is in the hands of its youth 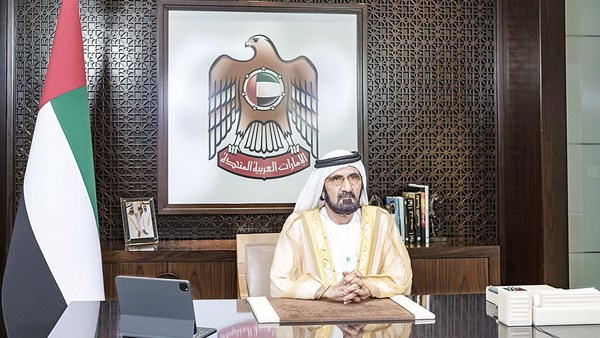 His Highness Sheikh Mohammed bin Rashid Al Maktoum, Vice President and Prime Minister of the UAE and Ruler of Dubai, may God protect him, attended the graduation ceremony of the 41st batch of students from the United Arab Emirates University. His Highness congratulated the graduates on this occasion, praising their achievement and giving to their country. His Highness to the families of male and female students, partners of their sons and daughters’ journey of study, diligence and excellence.
His Highness Sheikh Mohammed bin Rashid Al Maktoum, in a speech addressed to the graduate students on this occasion, stressed that “the future of the UAE is in the hands of its youth,” directing His Highness, male and female students, by saying: “Today you are entering the construction process.” His Highness added: “Your country has invested a lot in you. It expects a lot from you.”
For his part, His Excellency Zaki Anwar Nusseibeh, Cultural Adviser to His Highness the President of the UAE and Supreme President of the UAE University, said: His Highness Sheikh Mohammed bin Rashid Al Maktoum’s honoring of the ceremony honoring the university’s graduates reflects the wise leadership’s interest in supporting the education process in the country, pointing out that what the university has achieved Since its establishment until today, it translates the approach of its late founder, Sheikh Zayed bin Sultan Al Nahyan, may God rest his soul, and his wise vision that the UAE University will become the university of the future, a locomotive for human development in the country, and a center of cultural and intellectual radiation in the region. This came during a speech delivered by His Excellency at the graduation ceremony that was held yesterday for the 41st batch of university students, under the generous patronage of His Highness Sheikh Khalifa bin Zayed Al Nahyan, President of the State, may God protect him.

His Excellency said: “Despite the Corona pandemic, which almost stopped the wheel of normal life in all fields in the entire world, we are proud that life in the UAE continued its smooth path through the proactive vision of the wise leadership, especially when it comes to the educational system and reliance on technological technologies. To continue distance learning. His Excellency Zaki Nusseibeh added: “We are pleased that the UAEU experience in distance or hybrid learning during this difficult stage was a successful experience and achieved a distinguished interaction from the students. Today we are reaping its fruits at the graduation ceremony of the 41st batch of our sons and daughters, who constitute brilliant generations of distinguished entrepreneurs and scientists in all scientific and human fields, which also include advanced sciences in medicine, engineering, space, genetic engineering, artificial intelligence, and are able to Supporting the sustainable development process within the country, and strengthening the efforts of the rational leadership in anticipating the future over the next fifty years, and looking forward to global leadership in the country’s centenary.”

Joy and joy
The UAE University administration was keen that the graduation ceremony remain a constant annual event, despite the circumstances imposed by the outbreak of the new epidemic of the Corona virus in the world (Covid-19), and its repercussions that affected the various development and service sectors in the world, and a higher committee was formed. Under the supervision of Dr. Ghaleb Al-Hadrami Al-Buraiki, Acting Rector of the University, to prepare a distinct mechanism to celebrate the graduation of students and spread the spirit of joy and joy, while promoting the spirit of creativity and innovation, through a virtual ceremony worthy of the university’s prestige and reputation, through the use of the latest electronic communication technologies. It is noteworthy that the new batch of university graduates includes 2,725 male and female students, 346 of whom are in postgraduate programs, and 62 male and female graduates from the College of Medicine and Health Sciences.

Founded in 1976
It is worth mentioning that the United Arab Emirates University was founded in 1976 by the late Sheikh Zayed bin Sultan Al Nahyan, may God rest his soul, to be the first national university, with a vision through which it seeks to be a leading academic and research center of its kind in the region… and over more For five decades, the university has witnessed a steady development and expansion in faculties and study courses in line with the latest academic trends in the world. The university has more than 14,000 students in nine faculties, and more than 900 faculty members study in it. The university was recently included in the Leiden 2021 classification list for this year, for the best universities in the world, according to a set of indicators and classifications, as the university is a leading national institution in the field of international collaborative research publications by 82%, and papers published in open journals by 50%. The Leiden 2021 ranking also includes a list of authors by gender, as the United Arab Emirates University is currently the second best educational institution among the universities in the Gulf Cooperation Council countries in terms of the proportion of women’s research papers. The Leiden 2021 Ranking provides an important approach to the scientific performance of more than 1,200 major universities around the world using bibliometric indicators provided by the Center for Scientific and Technical Studies at Leiden University.