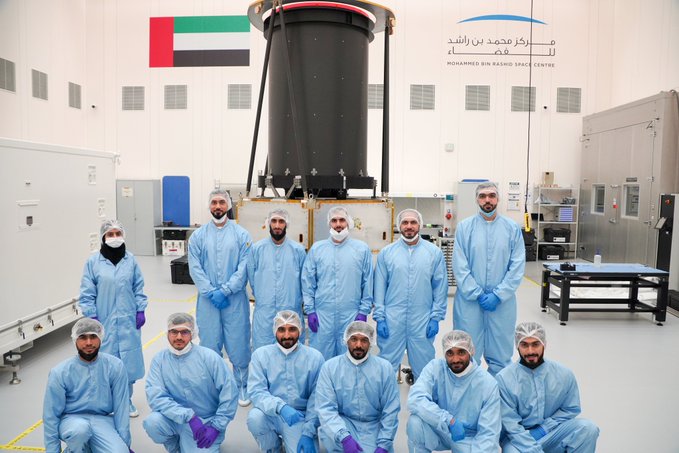 The Mohammed bin Rashid Space Center announced the completion of the critical review phase for the design of the satellite (MBZ-SAT), which is considered the most advanced model in the region in the field of high-resolution satellite imagery, marking the start of the team’s preparations for the development and manufacture of its flight model.

The critical review phase of the design includes a final, multi-pronged technical review, to ensure that work continues on the project, including areas related to fabrication, demonstration and testing, so that it can meet the stated performance requirements, according to cost, schedule and risk. The final approved design of the satellite weighs more than 800 kilograms, making it one of the largest and most advanced satellites in the United Arab Emirates.

The MBZ-SAT satellite has played a pivotal role in supporting the UAE space sector, as 90% of the mechanical structure components and 50% of the electronic models have been made in the UAE. In this regard, the Mohammed bin Rashid Space Center has actively cooperated with regional and international companies in an effort to build a local center for industries related to the space sector. The center has also entered into a partnership with local companies to manufacture and supply satellite components (MBZ-SAT).

Salem Al Marri, Director General of the Mohammed Bin Rashid Space Center, said, “The successful completion of the critical review of the satellite design (MBZ-SAT) represents an important stage in our journey towards launching the most advanced version of the satellite in the region in 2023. We are proud of the outstanding work that The team and all the achievements it achieves, and this project is a new proof of the expertise, skills and high capabilities of Emirati scientists and engineers.We also affirm our pride in the participation of the Emirati private sector in the development of this project, and its contribution to an important role in its progress.We will now focus on the next stages of these The mission is to serve as another leap in support of the UAE’s ambitions in the field of space.”

For his part, Amer Al Sayegh Al Ghafri, Director of the Space Systems Development Department and Director of the Satellite Project (MBZ-SAT) at the Mohammed bin Rashid Space Center, said, “The critical review of the design of the satellite was conducted in accordance with internationally established standards, with the participation of more than 100 engineers in the Center. This review confirmed the satellite’s readiness for the next stage, specifically the development and manufacture of the flight model, which will be launched in 2023.”

It is noteworthy that (MBZ-SAT) is the second Emirati satellite to be built by a team of Emirati engineers after the satellite “KhalifaSat”, and it will be equipped with an automated system to provide images around the clock, ensuring its ability to provide images for commercial use with the highest quality standards on world level. The new satellite will improve the accuracy of image capture by more than double the level provided by previous systems, and will increase the speed of downlink data transmission by three times the current capacity. The fully automated system for image scheduling and processing purposes at MBZ-SAT will be able to send more than 10 times more images than the center currently produces.

By 2022, the United States is the largest exporter of liquefied natural gas