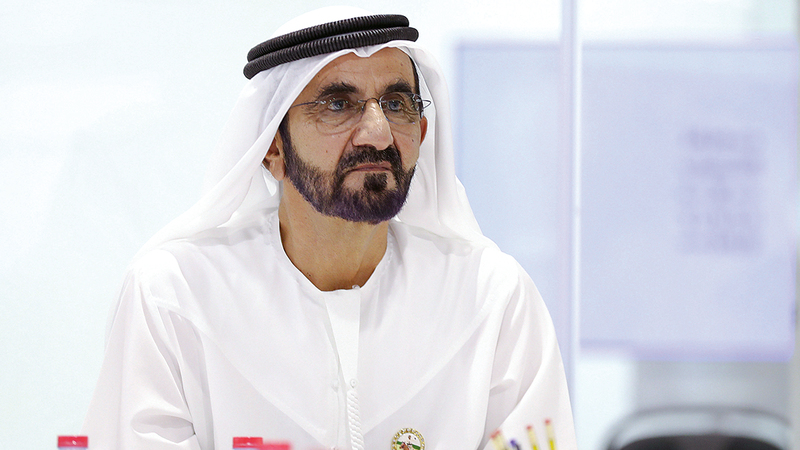 His Highness Sheikh Mohammed bin Rashid Al Maktoum, Vice President and Prime Minister of the UAE and Ruler of Dubai, confirmed that the tasks of the “Probe of Hope” project open new horizons for humanity to study the divine cosmic phenomenon, the hidden twilight on the red planet.

His Highness said in a tweet on Twitter, yesterday: “(I do not swear by twilight, night, and the moon if it is consistent) Believe in Almighty God.. For the first time in human history, the Hope Probe – the first Arab Islamic probe – depicts the phenomenon of the hidden twilight Discrete Aurora on the red planet Let us open up new horizons for humanity to study this divine cosmic phenomenon.”

The Emirates Mars Exploration Project (Hope Probe), the first space mission to explore the planets led by an Arab country, revealed the first images of its kind that show a comprehensive picture of the “Discrete Aurora” phenomenon in the atmosphere of Mars at night, using far ultraviolet rays. ), and the exceptional and unprecedented images will contribute to enriching the knowledge of scientists and researchers when studying the interactions between solar radiation and the magnetic field of Mars and its atmosphere.

Deputy Project Director for Scientific Affairs, Engineer Hessa Al Matrooshi, said: “Recording these unique snapshots of the separate aurora of Mars is a first in the world, as it provides high-resolution details and at wavelengths that were not previously observed.”

She added: “The images will help scientists to understand a deeper understanding of the nature of the Martian atmosphere and its relationship to the planet’s magnetic field, and this will have tremendous cognitive implications, as it contributes to supporting the theory that solar storms are not the only reason for the occurrence of auroras on Mars.”

The images, taken with the rover’s onboard Ultraviolet Spectrophotometer (EMUS), show a glow known as “discrete auroras”, the complex patterns of which trace regions where the irregular magnetic fields produced by the ferromagnetic minerals on the surface of Mars operate. Note that this effect of the magnetic fields of Mars is a unique feature of the red planet, as it, unlike Earth, does not have a comprehensive magnetic field generated by the planet’s nucleus, and it is remarkable that the EMUS ultraviolet spectrometer, which is the most accurate and responsive scientific instrument to ultraviolet rays around Mars , is able to monitor and photograph these auroral interactions with comprehensive coverage and high accuracy, and across a wide range of wavelengths, which provides an unprecedented opportunity to monitor and follow up the interaction of the atmosphere with solar activities.

While previous studies explained the theory of the association of the separate aurora with the magnetic field of Mars, and previous scientific observations and data were consistent with this connection, this phenomenon was not previously depicted with this quality and coverage.

“Within 10 minutes of these scientific observations from the (Hope Probe), we were able to confirm scientific theories of Martian auroras, which were acquired over a period of 10 years, and the data confirms the Martian upper atmosphere expert, who is a member of the science team of the “Hope Probe,” Justin Deegan. We are now capturing the tremendous potential that we have to explore the Martian aurora, the interactions between Mars’ magnetic fields, its atmosphere and solar activities, with a degree of accuracy that was not possible before, and happily, these scientific observations will contribute to obtaining scientific conclusions that go beyond the scientific objectives of the Emirates Mars Exploration Project.” .

The ultraviolet spectrometer is one of the three devices on board the “Hope Probe.” The main task of this device includes measuring oxygen and carbon monoxide in the Martian thermosphere, and the distribution of hydrogen and oxygen in the outer atmosphere.

Members of the Hope Probe science team, who previously worked on the MAVEN probe, realized the possibility of using the Hope Probe’s ultraviolet spectrometer to capture new aspects of Martian aurora phenomena, but the early observational results exceeded expectations.

There are three types of auroras around Mars: the diffuse auroras, which are observed during intense solar storms, which contain high-energy particles that interact with the Martian atmosphere, and cause its illumination as a whole, and unlike the Discrete Aurora. Which is found locally in the planet and not on the entire planet, as indicated by previous observations that suggest the theory of its location being directly related to the irregular magnetic fields, which are produced by magnetic minerals found on the surface of Mars, and both auroras were observed in the dark (night) side of the planet. Mars, while the third type of “proton auroras” was observed on the luminous (day) side of Mars, which results from an interaction between solar energy and hydrogen in the upper atmosphere of Mars. For information, these three types of polar auroras were previously identified by spectrometers. Ultraviolet radiation was detected on board the MAVEN and Mars Express probes, but the high-quality images, with their geographical coverage of the separate aurora, provided by the Hope probe, are unprecedented as they provide scientists with data that was not available before. n before.

Al-Matrooshi said that the auroras of Mars attract the attention of the international scientific community, because of the consequences of its in-depth study of broad prospects for scientific research, which will contribute to expanding our understanding of the Martian atmosphere and its interaction with the planet and with solar energy emissions.

The “Hope Probe” orbits Mars once every 55 hours, in its planned scientific orbit, which ranges between 20 thousand and 43 thousand kilometers, with an orbital inclination of 25 degrees, and covers completely, every nine days, the planet Mars, in a mission that lasts for a year. Full Mars (equivalent to two Earth years), to paint a complete picture of Mars’ atmosphere.

The Emirates Mars Exploration Project (Hope Probe) studies the atmosphere of Mars and the relationship between the upper and lower layers in it, and will provide scientists, researchers, and those interested in space sciences and planetary studies, the first comprehensive view of the atmosphere of the red planet at different times and throughout the different seasons of Mars, and at this stage aims The project will contribute significantly to deepening our understanding of Mars’ auroras.

• The images enrich the knowledge of scientists, when studying the interactions between solar radiation and the magnetic field of Mars and its atmosphere.