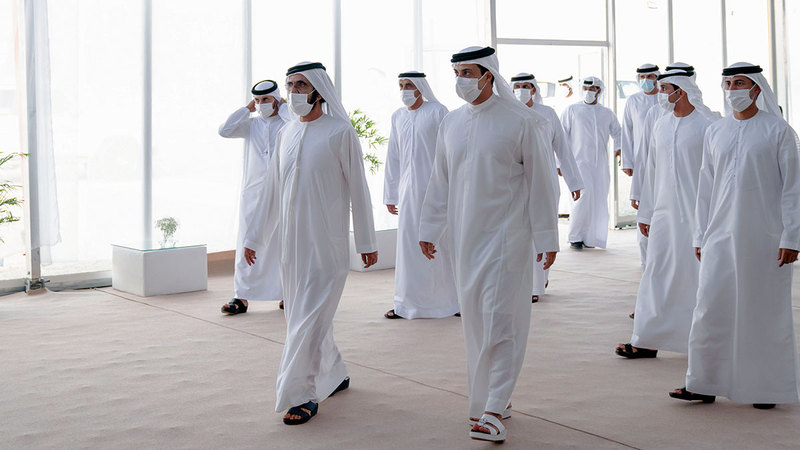 His Highness Sheikh Mohammed bin Rashid Al Maktoum, Vice President and Prime Minister of the UAE and Ruler of Dubai, stressed that the major projects that the UAE is witnessing in all fields, especially in the field of infrastructure, aim to serve society and provide the best supportive environments for all its individuals and institutions alike. In addition to the value these projects represent in opening new opportunities for the private sector, and the diverse paths they provide for investment, which will benefit the overall economic movement, and then benefit the country and the citizen.

This came on the occasion of His Highness inauguration of the strategic road network projects, which were recently completed under the directives of His Highness Sheikh Khalifa bin Zayed Al Nahyan, President of the State, and the follow-up of His Highness Sheikh Mohamed bin Zayed Al Nahyan, Crown Prince of Abu Dhabi and Deputy Supreme Commander of the Armed Forces, with investments of 1.95 One billion dirhams, with the aim of strengthening the road network between the emirates of the country, shortening the distance between its various regions, and reducing the time spent traveling between them, within the framework of vital development projects undertaken by the Committee to Follow up on the Implementation of the Initiatives of His Highness the President of the State, to meet the needs of citizens and provide the highest levels of comfort for them.

The inauguration was attended by H.H. Sheikh Mansour bin Zayed Al Nahyan, Deputy Prime Minister and Minister of Presidential Affairs, Minister of Energy and Infrastructure Suhail bin Mohammed Al Mazrouei, and a number of officials, senior engineers and team leaders involved in implementing the road projects that were opened.

His Highness Sheikh Mohammed bin Rashid Al Maktoum, along with His Highness Sheikh Mansour bin Zayed Al Nahyan, listened to an explanation from the Director of Engineering Projects Department at the Ministry of Presidential Affairs, Engineer Ali Al Mazrouei, about the vital road projects that were implemented under the follow-up of His Highness Sheikh Mansour bin Zayed Al Nahyan. The Ministry of Presidential Affairs supervised its implementation, in cooperation and coordination with the Ministry of Energy and Infrastructure, and the Union Water and Electricity Company, and it includes a network of paths, roads, intersections and bridges in three main axes, including: Sheikh Khalifa bin Zayed Road, Al Watan Road, and Hatta Dubai Road, with total lengths of up to to 112 km.

His Highness Sheikh Mohammed bin Rashid Al Maktoum said: “Under the leadership of my brother Sheikh Khalifa bin Zayed, the follow-up of my brother Sheikh Mohammed bin Zayed, and the combined efforts of all federal and local authorities… the UAE continues to prepare for the next fifty years, with qualitative projects that serve the citizen and support the great ambitions of the nation. and prepares for new stages of growth in all fields.”

His Highness praised the tireless efforts made by all the concerned authorities in the country, within the various development paths, which have a positive impact on the overall sustainable development process throughout the country. His Highness said: “People’s comfort is a goal to be achieved by federal and local efforts… and work is accelerating to consolidate the foundations of sustainable development and push its rates to the highest levels… and to create space for private sector institutions to expand their businesses and extend their activities based on a strong infrastructure, and the state provided them with all Reasons for excellence in accordance with the highest international standards… The work does not stop so that the UAE remains a role model in caring for people, and the best option for the investor seeking an environment that provides him with all the ingredients for success.

His Highness Sheikh Mohammed bin Rashid Al Maktoum was briefed on the details of the road projects that were completed in accordance with the best international specifications to ensure the safety and comfort of its users. His Highness also inspected some of the roads that were implemented, with their effect in shortening the elements of time and distance, to facilitate easy transportation between The various aspects of the country, as well as their impact on supporting the logistics system, facilitating the movement of transport and goods, as well as encouraging domestic tourism, in a way that supports sustainable development goals

The Sheikh Khalifa bin Zayed Road represents the first axis within the latest addition to the vital road network in the country, and it represents an extension of the Sheikh Khalifa Road (E84) leading to the Emirate of Fujairah, and extends from the intersection of Sheikh Khalifa Road with Sharjah-Kalba Road (E102), passing through In the two areas of Maliha, then Al Madam in the Emirate of Sharjah, ending to the Al Shuwaib area in the Emirate of Abu Dhabi, with a length of 52 km, and the axis extends with a width of three lanes in each direction, with a design speed of 140 km / h. The road includes the construction of three main intersections with the Sharjah – Kalba Road, the Dubai – Hatta Road, and the Al Shuwaib – Al Dhaid Road in the Madame area, in addition to seven intersections with flyovers, to provide free traffic in all directions, and prepare entrances and exits for the existing roads along the new path. To serve urban communities and agricultural projects scattered on both sides of the road.

The “Al-Watan Road”, which represents the second axis among the new road projects that was opened, provides a direct connection with a length of 42 km, a design speed of 120 km/h, and accommodates three lanes in each direction. This axis connects the Hatta region, passing through the area Masfout in the Emirate of Ajman, and the Al-Manai area and the mountains of Wadi Al-Qur in the Emirate of Ras Al Khaimah, then it intersects with the first axis, which represents the extension of Sheikh Khalifa bin Zayed Road in the Maliha area in the Emirate of Sharjah.

The third axis includes the development and upgrading of the current Dubai-Hatta road between Nizwa and Al Madam areas within the Emirate of Sharjah, with three lanes in each direction instead of two, and with a design speed of 120 km/h, while the length of this lane is 18 km, and includes the construction of a crossing An overhead for vehicles in the Madame area, and two bridges over the Madame roundabout. The project also includes the development of the current lower crossing leading to the Nizwa area, and the construction of four pedestrian bridges in the Al Madam area, while this axis enhances traffic safety and achieves great smoothness for the movement of vehicles on the road.

The new road network will contribute to shortening the distance and time between areas, as the second axis, along with a sector of the first axis, will shorten the distance between Al Madam Roundabout and Hatta from 115 kilometers to 95 kilometers, reducing the journey time by 30 minutes, while the first axis will contribute to shortening the distance. Between Al Shuwaib and the Emirate of Fujairah from 115 kilometers to 93 kilometers, which will reduce the journey time by 15 minutes.

Vice President of the State:

• «Under the leadership of Khalifa and the follow-up of Mohammed bin Zayed .. The UAE continues to prepare for the fifty years with quality projects».

• «People’s comfort is a goal that federal and local efforts are achieving.. Work is accelerating to consolidate the foundations of sustainable development».

• “Work does not stop so that the UAE will remain a role model in caring for people… and the best option for the investor seeking an environment that provides him with all the ingredients for success.”

Mansour bin Zayed: The country’s leadership puts infrastructure development at the top of its priorities

His Highness said that the leadership of the UAE places the development of infrastructure at the top of its priorities and strategic plans, realizing that it is the main pillar to advance the development process in the country, stressing that the infrastructure in the UAE is one of the best and most advanced infrastructure, and that these projects come in the first place With the aim of serving the citizens and preserving their well-being, and our belief that the citizen is the basis for the progress and prosperity of the country in various fields. His Highness expressed his thanks and appreciation for the efforts of the “Committee to Follow up on the Implementation of the Initiatives of His Highness the President of the State”, for its remarkable role in implementing and following up on the directives of His Highness the President of the State, in a way that ensures the implementation of projects, facilitates the lives of citizens, and meets their aspirations and needs.

The “Al Watan Road” consists of two parts. The first includes modifying the lane and raising the efficiency of the current road linking the Hatta region and the Sharjah-Kalba Road (E102), to become three lanes in each direction instead of two, with a length of 18 km. As for the second part, it includes the construction of a new track as an extension of the first road, with a length of 24 km, and passing through the mountainous areas (the mountains of Wadi Al-Qour in the Emirate of Ras Al Khaimah), to meet the first axis, which is the “Sheikh Khalifa bin Zayed Road” in the Maliha area.

• Adding 3 strategic axes to the vital road network in the country, with a total length of 112 km.

• The new road network supports the investment environment and promotes sustainable development by facilitating the movement of transport and goods and encouraging domestic tourism.