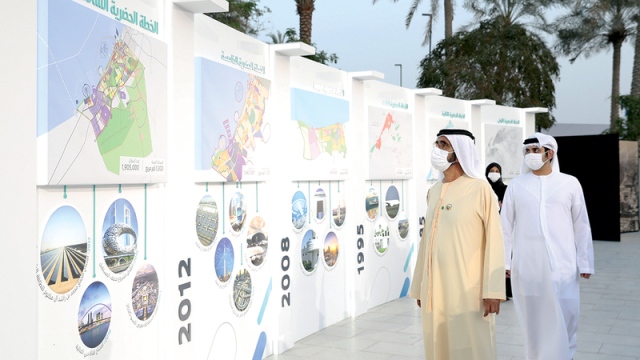 His Highness Sheikh Mohammed bin Rashid Al Maktoum, Vice President and Prime Minister and Ruler of Dubai, has directed that Dubai be the best city for life in the world, and affirmed that the development renaissance, which was founded by the late Sheikh Rashid bin Saeed Al Maktoum, may God rest his soul. In Dubai since the 1960s, it continues to achieve its ambitious goals that do not know a ceiling for excellence, while Dubai continues to implement development plans and strategies that place the human being, happiness, well-being and stability at the forefront of priorities, and following a work method based on inspiration from the best international practices, with their harmonization and compatibility With the needs of the community, and ensuring for its members a future that lives up to their expectations, but exceeds them to what is better, and our goal is to make Dubai the best city for life in the world.

His Highness Sheikh Mohammed bin Rashid Al Maktoum said in a tweet on “Twitter”: “We have adopted, with the grace of God, the new Dubai urban plan until 2040 … Our goal is for Dubai to be the best city for life in the world .. The areas for economic and entertainment activities will double one and a half times. “The length of our shores will increase by 400% during the next 20 years … and 60% of Dubai will be nature reserves.”

His Highness added, “The goal of the new Dubai urban plan is to plan life in Dubai for the next 20 years … to provide a quality of life for the population that will be the best and the finest in the world … and prepare for the upcoming major population and economic developments in Dubai … and we ask God to help everyone to serve the country and the people.”

His Highness said: “We continue to work to complete a global development model aimed at the well-being of society, empowering its members and motivating them to creativity, innovation and success by creating an ideal environment that meets their requirements and provides them with a space to unleash their potential energies, so that everyone is a positive partner in our ambitious march towards the future that we aspire to”.

His Highness added: “Proper planning based on careful analysis of data and complete flexibility in keeping up with the changes, was our way to lead many global indicators … and our goal today is to be in the highest ranks of global leadership, and within all fields … We race against time with a clear vision for the future that is aware of the requirements of excellence in it. … and surpasses all challenges towards a tomorrow that bears the causes of happiness for all. ”

For his part, His Highness Sheikh Maktoum bin Mohammed bin Rashid Al Maktoum said, through a tweet on «Twitter»: “The Dubai Urban Plan 2040 is a step that will be followed by steps in achieving a clear goal set by His Highness Sheikh Mohammed bin Rashid for this city, to be the best city for life in the world. , Because it is a city that deserves it, and because its leader does not accept less than that.

His Highness Sheikh Mohammed bin Rashid Al Maktoum, and his companions were briefed on the most important axes of the Dubai Urban Plan 2040, which is the seventh in the history of the Emirate of Dubai, as the first plan was launched during the reign of the founder of modern Dubai, the late Sheikh Rashid bin Saeed Al Maktoum, May God rest his soul in 1960, as Dubai witnessed an 80-fold increase in its population from 1960 to 2020, from 40,000 people in 1960 to about 3.3 million people at the end of 2020.

His Highness’s launch of the urban plan 2040 coincides with the year of fifty, and in line with his goals, as it draws an integrated future map for sustainable urban development, the main focus of which is people and improving the quality of life in the emirate of Dubai, enhancing the global competitiveness of the emirate, and contributing to providing multiple options for residents and visitors during the twenty The next year, to realize His Highness’s vision, “that Dubai be the best city in terms of living and life, by providing the best facilities for the best city in the world.”

His Highness Sheikh Mohammed bin Rashid Al Maktoum listened to an explanation from the Higher Committee for the Dubai Urban Plan 2040, headed by Matar Mohammed Al Tayer, Chairman of the Committee, Director General and Chairman of the Board of Directors of the Roads and Transport Authority, on the most important axes of the Dubai Urban Plan 2040, according to which the structure of the urban area was modernized. For the Emirate of Dubai, the development focus on five main urban centers, three of which are existing, in addition to two new centers.

His Highness and the attendees watched a short explanatory film, which included the most important features of the plan and its objectives aimed at raising the efficiency of resource use, developing vibrant and healthy communities, doubling recreational green spaces and parks to provide a healthy environment for residents and visitors, providing sustainable and flexible mobility options, raising the efficiency of land use to support economic activities, and promoting Attracting foreign investments in new sectors, improving environmental sustainability, preserving natural and built features, protecting cultural and urban heritage, as well as implementing legislation and planning governance.

Subsequently, His Highness Sheikh Mohammed bin Rashid Al Maktoum listened to an explanation from the Chairman of the Supreme Committee of the Dubai Urban Plan 2040, Director General and Chairman of the Board of Directors of the Roads and Transport Authority, Mattar Mohammed Al Tayer, about the final outputs of the plan, which was developed based on His Highness’s vision and the eight Dubai principles. The plan’s vision is (Dubai is the best city for life in the world). The urban plan includes a strategic structural plan for the emirate of Dubai for the next twenty years, which regulates the urban planning sector, spaces and land uses, with the aim of integrating all major plans for urban development in the emirate, aligning with economic and strategic trends, optimal utilization of the infrastructure, and supporting future growth and development.

The existing urban centers include: a historical and cultural center in the districts of Deira and Bur Dubai, including museums, traditional and popular markets and historic residential areas that have been linked in the memory of the residents and visitors of the Emirate of Dubai, while the World Economic and Trade Center includes the Dubai International Financial Center, Sheikh Zayed Road, Business Bay, and the city center. It serves various economic and financial activities, while the tourist and entertainment center includes the Marina District and Jumeirah Lakes Towers, and it serves various economic and tourism activities.

As for the two new centers, they are the Expo 2020 Center, which contributes to the development of the exhibitions, tourism and logistics sectors, and the Dubai Silicon Oasis Center, which serves as an incubator for innovation and knowledge, and contributes to developing the knowledge and technical economy sector, and attracting talented and innovative people.

The Dubai Urban Plan has defined six levels of urbanization, which follow a hierarchical structure of multi-use and dense urban centers that perform a specific function and a special role for population and employment complexes within the scope of their service powers.

Based on these six levels, the level of infrastructure for the road and transportation system, energy and government services such as hospitals, schools, service centers and others, as well as facilities and entertainment services are determined to provide integrated service centers in all areas of Dubai while expanding the use of flexible and sustainable means of transportation.

According to studies, the number of residents residing in Dubai is expected to increase from 3.3 million in 2020 to 5.8 million in 2040, and the number of inhabitants will increase during daylight hours from 4.5 million in 2020 to 7.8 million in 2040, as the available spaces will be utilized within The boundaries of the current urban development line, and urban development will be concentrated in the scope of the existing urban area, and all the needs of the population will be provided by developing integrated service centers in all areas of Dubai on foot or by using a bicycle or means of sustainable mobility, and focusing on raising the quality of life and raising the density The population within the areas close to the main mass transit stations.

The Dubai Urban Plan 2040 includes the issuance of an integrated and flexible urban planning law that supports the sustainability of development and development, and takes into account the future directions of the emirate, and will include the governance of urban planning by developing an integrated system for urban planning governance that ensures the organization of the relationship and responsibilities between all concerned parties, as well as raising the efficiency of development and optimal use of the infrastructure. By promoting development within the spaces within the urban area, focusing on development oriented to encourage mass transit, walking, the use of bicycles and flexible means of transportation, and creating a unified planning database that supports the decision-making process and enhances transparency.

• «The development renaissance continues to achieve its goals that do not know a ceiling for excellence.

• “We continue to work to complete a global development model aimed at the well-being of society, empowering its members, and motivating them to creativity.”

• “Proper planning is our way to be at the top of many global indicators … and our goal is to be in the highest ranks of global leadership.”

• “Dubai deserves to be the best city for life in the world … and its leader does not accept less than that.”

The Dubai Urban Plan 2040 includes the completion of the development plan for the Hatta region, over the next twenty years, and includes the development of an integrated development plan for the region in line with the state’s drive to encourage domestic tourism, and work to attract more foreign tourism, by enhancing the attractiveness of the Hatta region and its natural and heritage components. And maintain the sustainability of its environment. According to the plan, the nature of the Hatta region will be preserved, developed and rebuilt with the participation of the private sector, and opportunities are provided to encourage and support local national projects for the people of the region, in order to support the revitalization of tourism, and to encourage entrepreneurs, according to controls to preserve its distinctive nature and identity, in addition to developing integrated housing complexes for citizens. , Meet their current and future needs.

The urban plan 2040 includes providing the future housing needs of citizens in integrated societies, according to the best planning standards that include green spaces, commercial centers and recreational facilities, in order to enhance the quality and well-being of the citizen’s life for more than 20 years, as the area of ​​land allocated to housing citizens will reach 157 square kilometers in 2040, The plan includes re-housing the citizens in the old areas, to strengthen their connection to those areas.

According to the plan, green and recreational spaces and public parks will be doubled, and distributed to serve the largest number of residents, and a network of Green Corridors will be established linking service areas, residential areas and workplaces, to facilitate the movement of pedestrians, bicycles and sustainable mobility across the city, in coordination with developers and entities The area of ​​hotel and tourism activities will double by 134%, and the area of ​​economic activities will rise to 168 square kilometers, to strengthen Dubai’s position as a global economic and logistical center, and to increase the area of ​​land allocated to educational and health facilities by 25%, and the length of beaches open to the public will increase by 400% in The year is 2040.

The Investigative Committee began checking the song Manizha for Eurovision