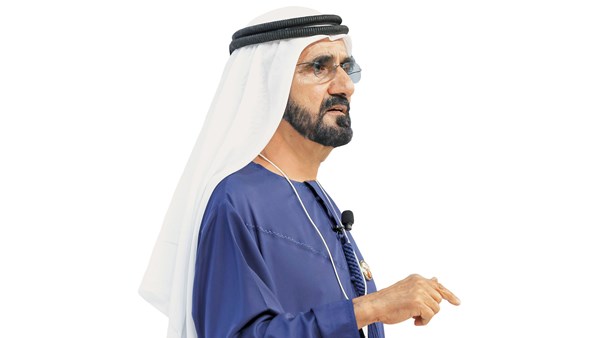 His Highness Sheikh Mohammed bin Rashid Al Maktoum, Vice President and Prime Minister of the UAE and Ruler of Dubai, may God protect him, launched yesterday the “Arab Brigades” initiative, the largest Arab movement led by the Museum of the Future, the new global landmark in the UAE to supervise the distinguished geniuses of exceptional talents from Distinguished Arab scientists, thinkers, inventors, innovators and creators in various fields, nurture, empower and develop their ideas in cooperation with the best global partners, to maximize their positive impact in the region. The initiative comes in line with His Highness’s habit of launching quality projects on the fourth of January every year. The “Arab Brilliant” initiative seeks to identify the most important 1,000 Arab women geniuses within 5 years in main tracks, including: physics and mathematics, software and data science, economics, universities and scientific research, etc., and support them scientifically and research.
His Highness announced the allocation of 100 million dirhams and the formation of a committee consisting of four ministers to develop an integrated system to supervise the Arab geniuses. His Highness also announced that the Museum of the Future, the new global landmark, will be the main center for this new Arab movement.
In a series of tweets on his official account on Twitter, His Highness Sheikh Mohammed bin Rashid Al Maktoum said: “Today we announce the launch of an Arab civilized project to search for the thousand Arab talents in the fields of physics, mathematics, programming sciences, research, economics, and others… Our goal is to enable them to perform their civilized role. The positive in the region. His Highness added: “We have built a world-class scientific landmark – the Museum of the Future – and we will open it soon, God willing. It will be the intellectual and administrative center for this new Arab scientific movement.. Personally, I bet on science, scientists and owners of ideas to change our Arab reality for the better.”
His Highness said: “These geniuses will be given attention scientifically and researched, and they will be linked with the largest thinkers, scientists and companies in the world, and will develop their ideas to maximize their positive impact on the region. We are targeting 1,000 Arab women in the next five years.”
His Highness explained: “We have formed a committee of our finest youth to lead this new scientific movement. They are supervised by Muhammad Al Gergawi, President of the Museum of the Future, along with Sarah Al Amiri, President of the Emirates Space Agency, Omar Al Ulama, Minister of Artificial Intelligence, and Shamma Al Mazrouei, Minister of Youth. We have allocated 100 million dirhams to the Arab genius project.” His Highness affirmed that “the resumption of civilization begins with the search for its true makers… and the nation that appreciates its scholars, geniuses and thinkers, and enables the makers of civilization in it on the right path to sovereignty, leadership and excellence in the future, God willing… May God help us all to serve our countries and our nation.”

Supporting the finest Arab minds
The “Arab Brigades” initiative seeks to launch the largest movement of its kind in the Arab world, led by the UAE, to build an Arab knowledge, scientific, intellectual and creative elite that constitutes the nucleus of a distinguished, creative and knowledge society in the Arab world and an added qualitative value to the scientific and creative community in the world. The knowledge project targets The huge support for the finest Arab talents, minds and creativity, distinguished and superior, and highlighting these geniuses and introducing their achievements, and investing in capabilities, energies and exceptional talents, within a long-term vision that seeks to preserve creative Arab minds and exploit their potential optimally, so that the Arab world is a force that attracts minds Arabia does not repel it, it preserves it, rewards it and preserves it, it does not push it to emigrate.
“Arab Brigades” aims to empower and support the most important 1000 Arab women in the fields of physics and mathematics, software and data sciences, economics, universities and scientific research, and to empower them and provide them with support and help them develop their ideas to perform their civilized role and maximize their positive impact in the region.
His Highness Sheikh Mohammed bin Rashid Al Maktoum formed a committee to lead the “Arab Stars” initiative and supervise its implementation under the supervision of His Excellency Mohammed bin Abdullah Al Gergawi, President of the Museum of the Future, and the membership of: Her Excellency Sarah bint Youssef Al Amiri, Minister of State for Advanced Technology and Chairman of the Board of Directors of the Emirates Space Agency, Her Excellency Omar bin Sultan Al Olama, Minister of State for Artificial Intelligence, Digital Economy and Remote Work Applications, and Her Excellency Shamma bint Suhail Faris Al Mazrouei, Minister of State for Youth Affairs. 100 million dirhams was allocated to the committee to develop an integrated system to support and embrace Arab talents and to develop partnerships with various local, regional and international companies to maximize their positive, global and research impact globally. The Museum of the Future will be an incubator for Arab geniuses and a center for the various activities of the initiative.
The tracks were chosen for the “Arab Brilliant” initiative based on the qualitative and added value of the geniuses and talents in these fields. Physics and mathematicians are the basis on which the industries of the future are based, foremost among which are industries related to advanced technology and space sciences, and the software and data science sector is the fuel of the future and the main driver For future development in various fields.
In addition, the path of the economy plays a vital role in building the future economy in the Arab world. The path of universities and scientific research also reflects the belief of the UAE that the talented Arab youth armed with knowledge are able to make change and lead the knowledge, development and renaissance movement that will restore to the Arab world its prominent position on the map of innovation, creativity, excellence and achievement, and enrich the human experience in various fields.
Details of this huge project will be announced in the coming weeks at a regional conference, in addition to the details of each of the tracks within the “Arab Nabilities”, and the registration mechanism for the initiative.

See also  The risk of gas