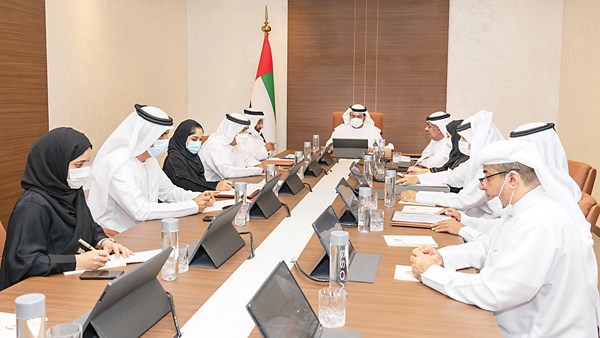 His Highness Sheikh Mohammed bin Hamad bin Mohammed Al Sharqi, Crown Prince of Fujairah and Chairman of the Board of Directors of the Fujairah Foundation for Regions Development, chaired in his office at the Emiri Diwan the first meeting of the Board of Directors of the Foundation for the year 2022, in the presence of His Excellency Saeed Mohammed Al Raqbani, Vice Chairman of the Board, Engineer Khamis Al Noun, Director General of the Foundation, and members Board of Directors.
His Highness the Crown Prince of Fujairah was briefed on the report of the Foundation’s work and results during 2021, and its construction, housing and community projects that it is working on, confirming the directives of His Highness Sheikh Hamad bin Mohammed Al Sharqi, Member of the Supreme Council and Ruler of Fujairah, to provide and develop government services in line with the state’s vision and orientations in terms of efficiency indicators Government work and the quality of life of individuals, according to the highest standards of quality and excellence.
During the meeting, the Foundation’s annual statistics and awareness-raising initiatives, which contribute to raising the community’s awareness of the environment, sustainability and housing stability, were reviewed within the Foundation’s current plan and its future development plans.
His Highness praised the level of work in the Fujairah Foundation for Regions Development and the vital projects that it implements and supervises in various regions of the Emirate of Fujairah, stressing the need to continue the efforts made and raise the efficiency of work to achieve the best results. The meeting was attended by Salem Al-Zahmi, Director of the Office of His Highness the Crown Prince of Fujairah.