Mohamed bin Zayed: “Drag Break” is one of the projects that support tourism in the country 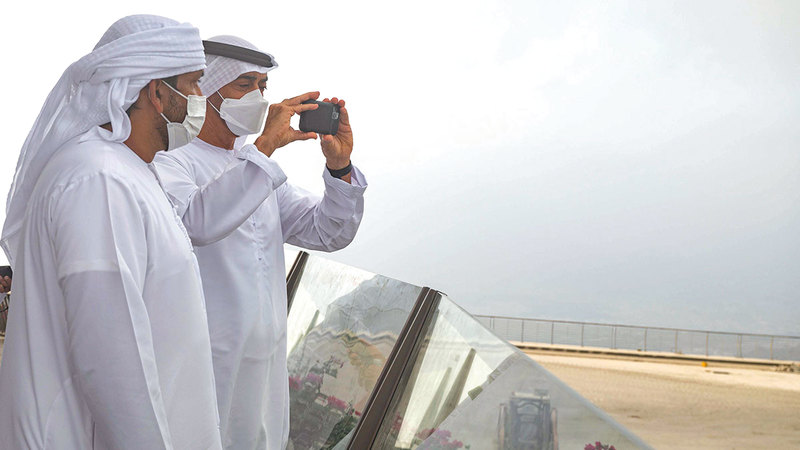 His Highness Sheikh Mohamed bin Zayed Al Nahyan, Crown Prince of Abu Dhabi and Deputy Supreme Commander of the Armed Forces, visited the “Drag Rest House”, which is located at an altitude of 600 meters above sea level, and is the latest tourism project in the city of Khorfakkan.

His Highness toured the restroom from the indoor and outdoor balconies that provide views of the various scenes and landmarks that the city of Khorfakkan embraces throughout.

His Highness stressed that the project of the cloud rest is one of the vital and qualitative projects that support tourism in the country.

His Highness Sheikh Mohamed bin Zayed Al Nahyan said, in a tweet on Twitter, yesterday: “Today I visited the cloud lounge in Khor Fakkan .. a beautiful view of the city’s landmarks and its ancient history, which God loved the beauty and diversity of nature .. vital and quality projects that support tourism in the homeland .. Appreciated efforts of the ruler of Sharjah, Sheikh Sultan Al Qasimi, who harnessed all possibilities for the service of the country and the citizen.

His Highness was briefed on the facilities and services of the building for visitors, which consists of two floors with a total area of ​​2788 square metres. And a prayer room for men and another for women, toilets, and service and administrative facilities.

His Highness Sheikh Mohamed bin Zayed Al Nahyan praised the vital and important qualitative projects recently inaugurated by His Highness Sheikh Dr. Sultan bin Muhammad Al Qasimi, Supreme Council Member and Ruler of Sharjah, which contribute to the provision of integrated infrastructure for the population and service and tourism facilities that attract tourists and visitors from various cities of the Emirate of Sharjah. . He appreciated the efforts of His Highness and his mocked capabilities to serve the country and the citizen.

His Highness said, “These projects add ambitious and promising development paths and constitute a tributary that supports the plans of social, economic and tourism growth in the UAE and its aspirations to achieve comprehensive sustainable development.”

His Highness pointed out that the UAE, under the leadership of His Highness Sheikh Khalifa bin Zayed Al Nahyan, President of the State, places on top of its priorities the provision of the best services to the community and the various means of comfort and welfare for the citizen through the implementation of projects that bring good to the country and the citizen.

• «The UAE, under the leadership of Khalifa, puts providing the best services to the community at the top of its priorities».

• «Drag Break, a beautiful view of the city’s landmarks and its ancient history».

The drag lounge was implemented on an area of ​​10,250 square metres, and includes a children’s play area of ​​541 square metres. With a length of three kilometres, the trail offers mountain sports enthusiasts and sports practitioners a unique experience among the Khorfakkan mountains.