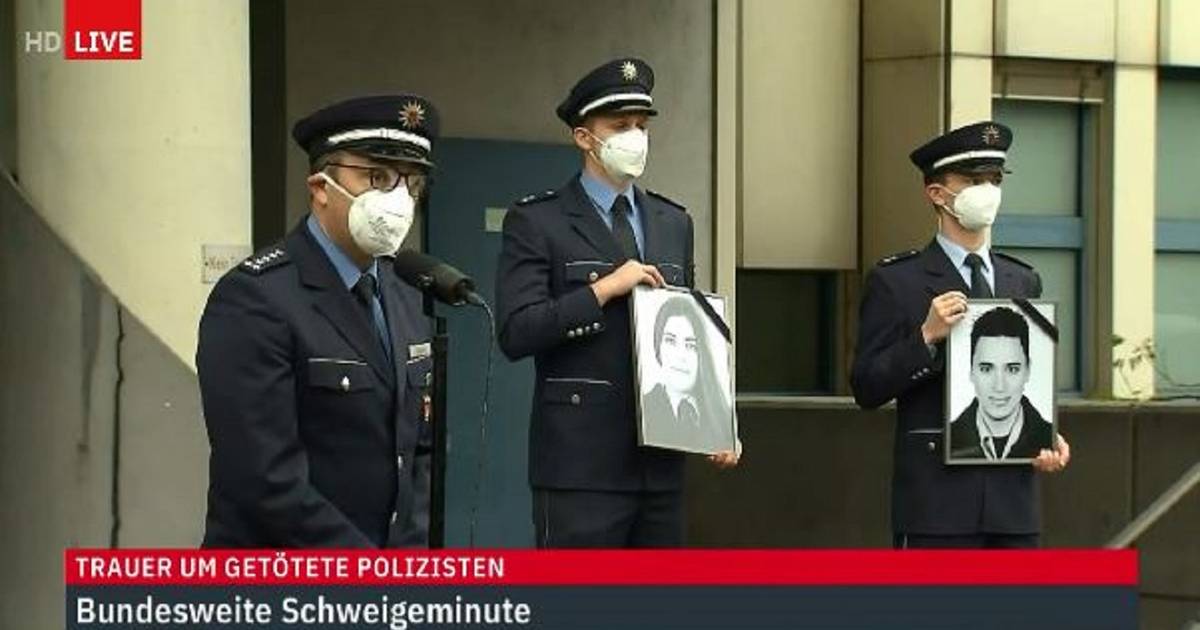 A minute’s silence was held across Germany at 10:00 a.m. Friday in memory of the two officers who were shot dead on Monday at a vehicle checkpoint in the southwestern Federal Republic of the Federal Republic. In the meantime, the evidence against the two arrested suspects is piling up.

Police forces and authorities in the sixteen federal states responded to the call for a national tribute to the 24-year-old police officer in training and a 29-year-old chief inspector from Rhineland-Palatinate. In the municipality of Kusel, where the police station to which the victims were linked, a non-public memorial service was held in addition to the minute’s silence. The funeral service was attended by State Prime Minister Malu Dreyer and State Interior Minister Roger Lewentz (both SPD). An official memorial service is planned for a later date.

The investigation into the drama is yielding more evidence that seems to confirm the suspects’ alleged motive – to cover up poaching. In the van of one of them, detectives found no fewer than 22 dead fallow deer, the Public Prosecution Service (OM) in Kaiserslautern announced on Thursday. In the neighboring state of Saarland, 20 boned carcasses of wild animals and animal waste were found in the sausage kitchen of the main suspect. In front of the door was a refrigerated trailer with packed meat ready for sale worth a few thousand euros.

German media already reported on Tuesday that Andreas S. traded in game meat. He also previously ran four bakery businesses that he inherited from his parents, but was declared bankrupt in 2020.

The two suspects are incarcerated on charges of murder and commercial poaching. The Public Prosecution Service assumes that Andreas S. (38) and Florian V. (32), both from Saarland, fired on the two officers together around 04:22 on Monday morning during the vehicle check at Kusel. V. confessed that he was at the scene of the crime but says he did not shoot. S. would have asked him to help with poaching, including loading the killed animals into the van. According to V. it was mostly about wild boars.

He said he could not prevent S. from shooting the two officers when they asked for their papers. The 24-year-old police officer in training was shot in the head with a shotgun and died instantly. Next to the woman’s body was a driver’s license and identity card, both in the name of the 38-year-old prime suspect. The 29-year-old Chief Inspector emptied the magazine of his service weapon, fired 14 times and was hit by four bullets – one in the head – also fired from a shotgun.

Police and the judiciary already stated on Tuesday that they assumed that covering up poaching was the motive for the fatal exchange of gunfire. According to the OM, investigations into previous cases of poaching were already underway against both suspects. Andreas S. was known to the police for continuing to drive after a collision.

According to the Public Prosecution Service in the neighboring state of Saarland, where both suspects live, Andreas S. was sentenced in 2006 to a fine by the Saarbrücken District Court for inflicting bodily harm through negligence in a hunting accident. He had seriously injured a fellow fighter at the time with a shot to the neck and chest and inflicted significant injuries on one eye. Florian V. has been convicted three times since 2018, including for traffic violations.

S.’s conviction for the hunting accident could explain why his hunting license was revoked as the German Hunting Association stated earlier this week. His application for a new hunting license was rejected in 2008 on the basis of his so-called ‘personal trustworthiness’. In accordance with the Weapons Act, the applicant’s behavior in daily life and during the hunt, as well as his handling of weapons and ammunition, is examined. A new application was rejected in 2020 for the same reason.

According to the regional broadcaster SWR, the man in his thirties also had a license to possess certain firearms in the past, but that was also revoked. That happened in 2020, reports news-trier. Andreas S. used that permit for hunting, according to a local news site.

Sources in security circles reported on Tuesday that the police had found weapons in S.’s home in Spiesen-Elversberg where he was arrested on Monday. It concerned an arsenal, consisting of five pistols, a repeating rifle, ten other ‘long weapons’, a crossbow, a silencer and ammunition.

The arrest of the main suspect happened after the thirty-year-old – for whom a search notice had been issued – reported to the police through his lawyer. The 32-year-old co-defendant was also arrested in the house. S.’s car would have stood in front of the door, with bullet holes in it. Two long weapons were found in the co-defendant’s home in Sulzbach.

He had run away from home so many times that his dad eventually let him go forever. Then, after 5 years, the man received a strange phone call