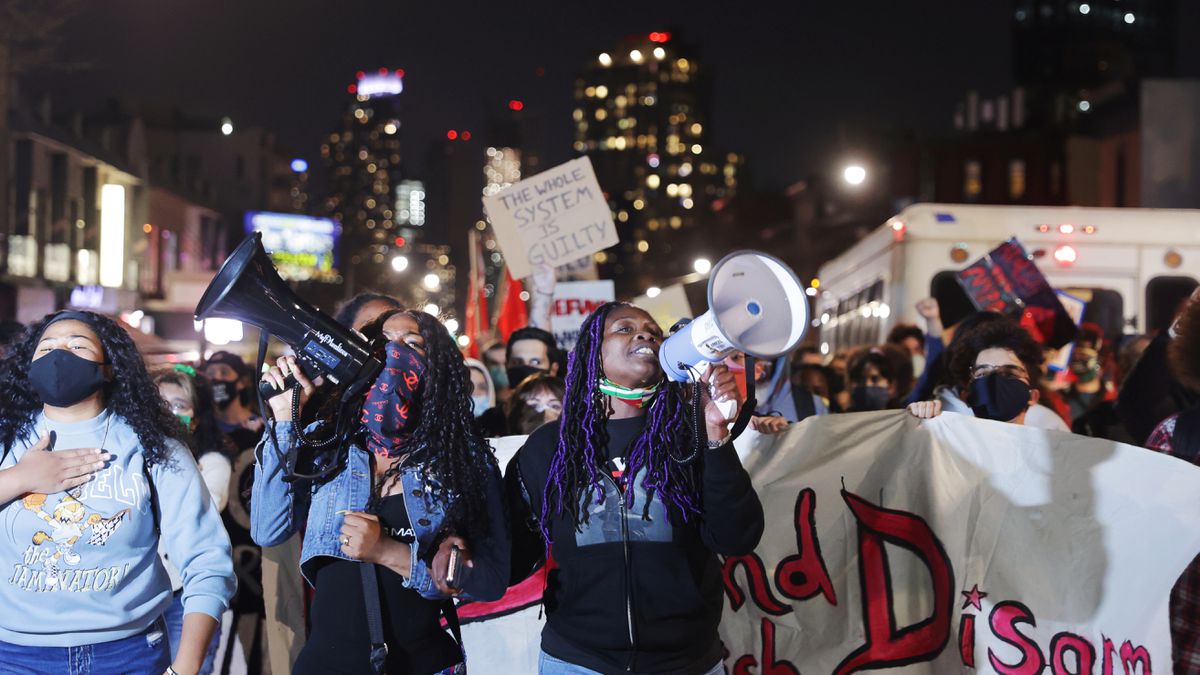 As soon as Judge Peter Cahill read the guilty verdict in court on the three counts of murder against police officer Derek Chauvin for the death of George Floyd, joy erupted in a city that had prepared for everything. Shops and restaurants in downtown Minneapolis had been bricked up, public schools had suspended face-to-face classes, and the National Guard military patrolled every corner. It was this Tuesday, however, one afternoon hugs and fists raised; of hope for some and skepticism for others, and it was also a confirmation: nothing this would have been possible without this powerful video as proof.

“How many others were not recorded before?” Read a poster in the hands of Hodan B., a 30-year-old black psychologist. In his opinion, without the images of George Floyd’s agony under Chauvin’s knee, the verdict would not have been possible. “It was what helped to dismantle the police version,” he says. Even so, he mentioned, “other times with the images from the policemen’s own cameras, there have not been any convictions either.” “What we have seen was beyond cruel.”

Hodan is one of those who believes this trial will set a precedent for future cases of police brutality. The Americans saw at the trial how the local police chief, Medaria Arredondo, also black, sided with the accusation and rejected the methods used by Chauvin, who was fired in his day and will receive a sentence in eight weeks.

Emma Luten, a 24-year-old white girl, was confident of a conviction for any of the three charges, but was surprised that it came in all, second and third degree murder as well as reckless manslaughter. He believes that this case “has meant a true redemption of accounts and also a step forward on the path to full racial justice.” The trial, he believes, has required overwhelming evidence after many cases where officers were acquitted despite strong images. Luten affirms that if Floyd had been a white man Chauvin not only would have removed his knee from the neck much earlier, but he believes that “we would not have seen that knee in the neck.”

Floyd’s death on May 25, 2020, sparked several rallies and protests last summer. In them were black and white youths shouting “Black lives matter,” the name of the great movement against police racism, Black Lives Matter. Following the verdict, the courtroom celebration moved to what is now called George Floyd Square, at the cross street in front of the Cup Foods store where he died.

In Los Angeles, the ghost of the Rodney King case, an African-American who was mercilessly beaten in 1991 by four police officers – three of them white – after being pulled over for speeding, reminded the city of one of his worst experiences with driving. police brutality. The uniformed men were acquitted in 1992 by a jury where there was not a single black. This was a spark that set the center on fire with various acts of vandalism. Those who remember those days recognize the progress made this Tuesday.

“Relief”. That’s the word Taylor, a 52-year-old African American, uses to define what caused the verdict. “It was about time that the police paid for their mistakes,” he says while waiting for the bus in the center of the Californian city. On his mobile he follows the coverage that the CNN chain makes of the celebrations that the judicial outcome has caused throughout the country. “I hope that from now on the police will treat the people they arrest with respect and dignity.”

The verdict has left Los Angeles to breathe with rest after weeks of tension. Demonstrations by Black Lives Matter and other organizations demanding to withdraw funds from the police had increased their vigils in front of the offices of the local body and the mayor’s office, the most recent this morning.

“This has been the most important trial of our lives,” admits Pastor Shep Crawford, who presides over an evangelical church in downtown Los Angeles. “After many years, society understood that black lives matter. And now it seems that the system has finally learned it, “he says after praying in Grand Park before a group that celebrated the decision. “You have to keep working. I want a country where my children are not surprised every time justice is served ”.

To avoid the criticism generated by his handling of the marches last summer, following the murder of George Floyd in Minneapolis, the country’s police departments have adopted new policies aimed at reducing the use of force. It has been an operational transformation that has required collaboration and dialogue with local leaders, religious representatives, and neighborhood and community associations. “We have worked a lot” with these social agents, explained the head of the New York Police Department, Dermot Shea.

In New York, despite the call – previously scheduled, regardless of the result of the ruling – of half a dozen concentrations in the city, the police deployment was much more visible in the late afternoon than the presence of protesters. A cordon of fences surrounded the perimeter of the busy Times Square police station, around which only television cameras were present, while the usual rhythm of Manhattan’s Km 0 continued without interruptions or traffic interruptions. A group of activists had called a rally there on social media at six in the afternoon, but the only thing evident was the police deployment. In Manhattan, several hundred agents were deployed, and about 300 more around the Barclays Center in Brooklyn, where a small group of people followed the reading of the verdict live, bursting into shouts of rage and relief when they heard Chauvin’s triple guilty plea. . In Harlem there was a spontaneous march of dozens of people with banners of the Black Lives Matter movement.

On a corner of the square, Joshua, in his twenties, was following the announcement of the ruling on his mobile while he waited for his girlfriend. “It would only have been missing that [Chauvin] It would have gone smoothly, but there is much injustice left, centuries ago. This is just the tip of the iceberg, ”said the African-American, who has not participated in any march against police violence despite sharing the complaint.